Hurricane Dorian may force some Waffle House locations to close

The Waffle House Index is something that FEMA uses as a gauge of how bad conditions are following a major disaster like a hurricane. 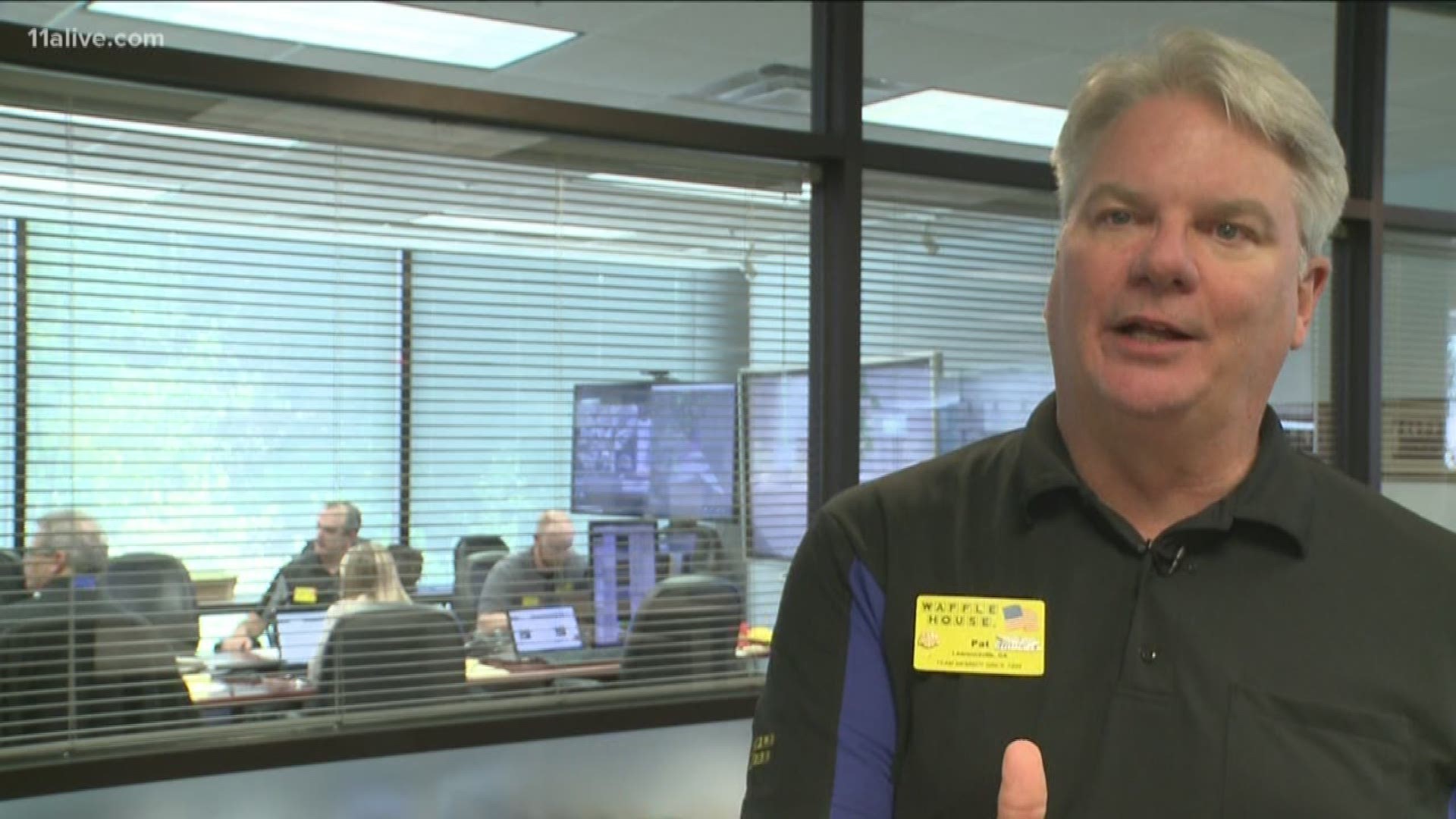 ATLANTA — In the South, one thing that can always be counted on, no matter how bad it gets outside, is Waffle House. But what happens when conditions are so bad that Waffle House has to close?

Waffle House has been a part of life in the South since its founding in suburban Atlanta in early September 1955.

The diner-style restaurant quickly spread across much of the southern United States, and is noted for always being open, with more than 2,100 locations, serving breakfast, lunch and dinner at all times of the day and night.

Many locations can be found near interstates and other major highways, and are staples for travelers and truckers, though many locals enjoy stopping in or picking up a quick meal to go.

Pat Warner, director of public relations and external affairs for the restaurant group, told 11Alive on Friday that they activated their storm center on Thursday and began to closely monitor the progress of Hurricane Dorian.

"We commandeered a conference room, brought in extra screens and have been constantly on the phone with our teams in the area," he said. "We've got 140 stores in Florida. We've got forecasts and models that we're watching to best handle the situation."

On Tuesday morning, Warner told 11Alive News that despite mandatory evacuation orders in parts of four states, due to the volume of traffic, all of their locations remain open.

"Many evacuees are stopping in to grab a bite on the run," he said.

As a result, their locations are still open, and they are continuing to monitor the progress of Hurricane Dorian from their Atlanta area headquarters and making adjustments as necessary.

"For right now, everything is 'Green,'" Warner said. "No impacts now, but we'll make decisions later in the day as the hurricane moves closer to the coast."

Since the chain's locations are always open, one of the challenges they have is closing locations in areas where evacuations become necessary.

"We've developed a checklist for what to do in order to close locations in areas where we have to evacuate, so that our staff can remain safe," Warner said.

In areas close to Dorian's potential landfall, the process will include shutting off the gas and boarding up the windows of the restaurants.

The reliability of Waffle House in a given area is such that the Federal Emergency Management Agency even uses local Waffle House locations as a barometer regarding the toll that Mother Nature has taken on an area following a natural disaster like a hurricane or tornado.

In 2011, former FEMA director Craig Fugate mentioned what he termed the "Waffle House Index," as a measure of this.

"The Waffle House test just doesn't tell us how quickly a business might rebound — it also tells how the larger community is faring," said a FEMA blog post from 2011. "The sooner restaurants, grocery and corner stores, or banks can re-open, the sooner local economies will start generating revenue again — signaling a strong recovery for that community."

In a 2016 edition of the NPR series "Wait Wait, Don't Tell Me," Fugate described the test, saying it came out of the '04 hurricanes, when he was Florida's emergency management director.

"They are open most of the time. And that was the index. If a Waffle House is closed because there's a disaster, it's bad. We call it red. If they're open but have a limited menu, that's yellow," Fugate said. "If they're green, we're good, keep going. You haven't found the bad stuff yet."

Warner told 11Alive on Friday that the company is planning to stage resources in two different locations ahead of Hurricane Dorian, with plans to deploy them once it is safe to do so.

"It's a bit more difficult in this case, since the storm may slow or stall after making landfall," he said. "But we're watching to see what happens."

Electric crew headed to Florida ahead of Hurricane Dorian crashes

How Dorian could impact Georgia

Gov. Kemp issues state of emergency ahead of Dorian for several Georgia counties