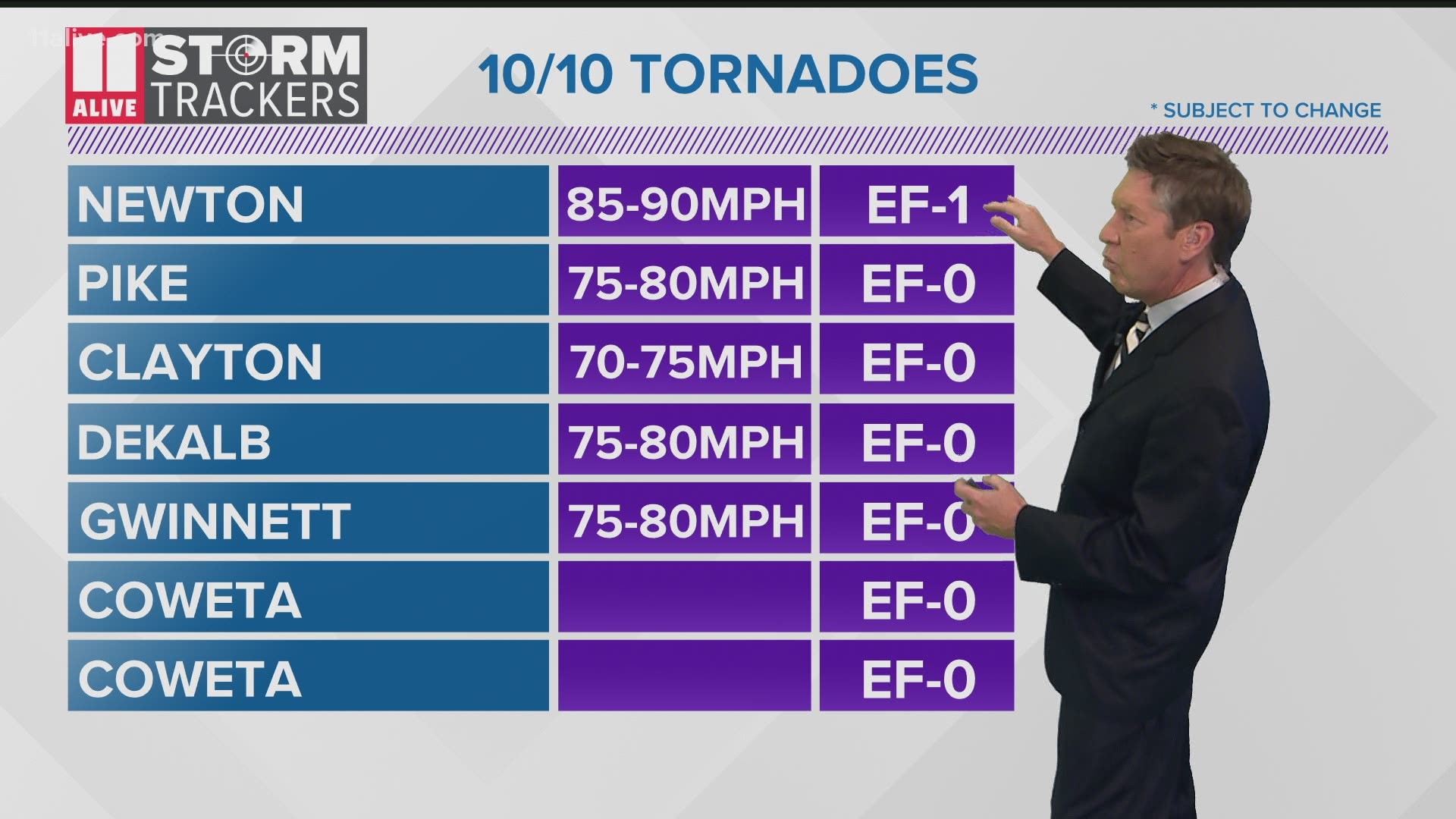 ATLANTA — The National Weather Service is now confirming seven separate tornados touched down across parts of metro Atlanta when the remnants of Hurricane Delta reached Georgia on Saturday.

By Sunday, the NWS Peachtree City office had already announced their findings on two tornados - an EF-1 in Newton County that traveled roughly 1.4 miles up to just south of I-20 and an EF-0 in Pike County that traveled about 2 miles through a rural area uprooting trees in the area.

In roughly one hour's time, Coweta County saw two separate tornados. The first occurred at 6:18 p.m. and was classified as an EF-0 with winds between 69 and 73 mph.

The tornado lasted less than a mile after touching down near The Village Center along Highway 29 in Newnan. It continued north ending in a residential area along Howard Hughes Road about a minute later. Along its path, it damaged some trees and uprooted others.

The second tornado in the county, an EF-0 with winds between 66 and 79 mph, occurred at 7:15 p.m. This storm traveled on the ground for little more than a third of a mile on the southwestern side of Newnan. Survey teams said the tornado touched down on the north side of Newnan High School at 7:15 p.m. and continued north ending just south of Westview Cemetery one minute later.

The storm is being blamed for tree and structural damage with a significant portion of the latter being to the library at Newnan High School which had its roof torn off.

Around 7:45 p.m. the Clayton County tornado, rated at EF-0 with winds of between 70 and 75 mph, briefly touched down near Maddox Road south of Mt. Zion Boulevard between Morrow and Allendale Heights in northeast Clayton County.

Damage included a few snapped trees and damage to roofing materials and siding. The tornado lifted back up just before Mt. Zion Boulevard after traveling a little over half a mile.

A tornado also touched down in DeKalb County around 8:16 p.m., also an EF-0 but with stronger winds of between 75 and 80 mph. The NWS said this tornado touched down just north of I-20 near Wesley Chapel Road and Cross Lane, snapping several small trees and pulling shingles off roofs.

However, there was more extensive damage between Lindsey Drive and Oak Valley Road as the tornado headed to the northwest.

"In this residential area, including Sherwood Avenue and Hanes Drive, multiple larger trees were snapped or uprooted with several falling on homes," the NWS report said.

These also came down on utility and power lines causing more damage. The storm then weakened as it moved north-northwest snapping smaller trees in the Belvedere Square area and just across from Covington Highway along South Indian Creek Drive.

The tornado traveled about 1.7 miles over four minutes.

The latest reported tornado so far occurred in Gwinnett County around 8:43 p.m. Data suggests it touched down just west of Bethesda Park between Lilburn and Lawrenceville.

While only on the ground for about two minutes, the storm snapped and uprooted multiple trees in a residential area between Oak Park and Sweetwater drives. The tornado dropped some trees on homes according to the NWS but the damage wasn't believed to be significant.

It then crossed over Lawrenceville Highway, snapping more trees before lifting off the ground. The storm had winds of between 75 and 80 mph and traveled about .7 miles.

The National Weather Service is continuing their surveys across the region, meaning more tornados could be confirmed as the process unfolds.