Severe weather comes to an end for metro Atlanta

Storms with winds as high as 70 mph have swept through the area today. 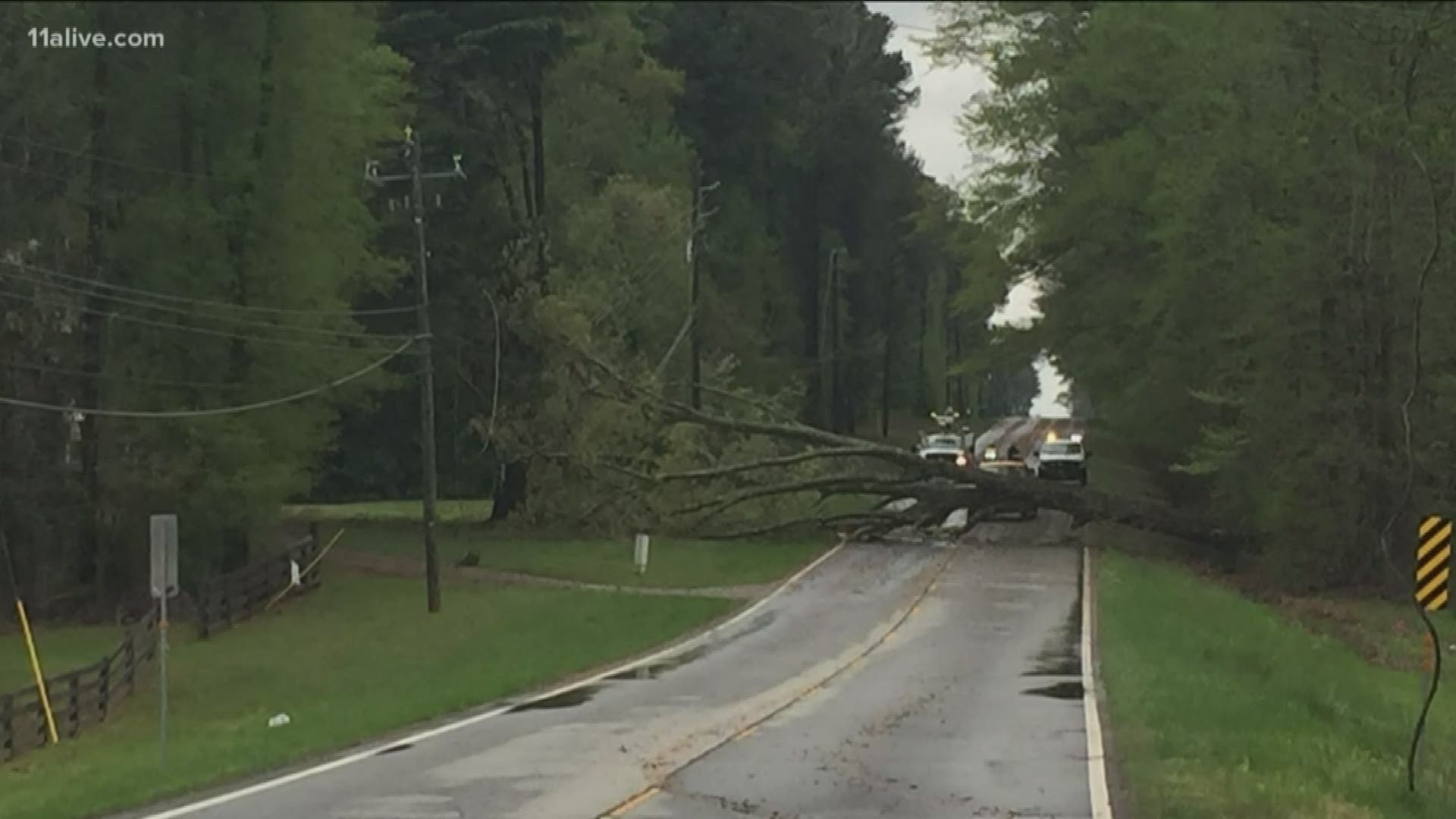 ATLANTA — Severe thunderstorms, bringing winds as high as 70 mph in some instances, have swept through metro Atlanta today.

Warnings were issued for several metro Atlanta counties, and damage and power outages have been widely reported south of I-20.

The 11Alive StormTrackers will continue monitoring and alerting you of any warnings or watches that come today.

2:15 p.m.: The stronger storms have moved away from north Georgia. A new watch has been issued for south and southeastern Georgia, well away from Atlanta.

1:28 p.m.: The National Weather Service says they received a report of an injury after a tree fell on a house in downstate Quitman County, Ga.

12:35 p.m.: 11Alive StormTracker Susie Franks Berta sends in photos of the damage left by the storm in Newnan, where 70 mph gusts were reported:

12:28 p.m.: The risk for severe weather in southwestern Georgia has been elevated to Enhanced, or Level 3, today:

12:27 p.m.: 11Alive Meteorologist Chesley McNeil with a look at how things were outside our own studios as the storm moved through about an hour ago:

12:25 p.m.: Some of our 11Alive StormTrackers are reporting lost power in areas like Fayetteville, Jonesboro and Henry County.

12:15 p.m.: Reports and photos coming in now from the damage the storm left behind in Newnan.

12:05 p.m.: 11Alive Meteorologist Wes Peery on why you need to take the current round of severe thunderstorm warnings seriously if they're announced for your county:

11:55 a.m.: The severe thunderstorm warning that included Clayton and Coweta Counties until noon has been canceled in Clayton and Coweta. It continues in Butts, DeKalb, Fayette, Henry, Rockdale and Spalding Counties.

11:45 a.m.: The severe thunderstorm warning that included Fulton County through noon has been canceled for Fulton. It continues in Butts, Clayton, Coweta, DeKalb, Fayette, Henry, Rockdale and Spalding Counties

11:27 a.m.: The severe thunderstorm warning that includes Fulton, DeKalb, Clayton and other metro Atlanta counties brings the threat of gusts up to 70 mph and potentially a brief tornado.

11:07 a.m.: The severe thunderstorm warning for areas including Newnan, LaGrange and Senoia continues until 11:30 a.m.

10:38 a.m.: A severe thunderstorm warning is in effect until 11:30 a.m. for Coweta, Troup, Meriwether, Heard and Carroll Counties.

9:52 a.m.: A tornado watch has been issued for parts of central and southwest Georgia until 4 p.m. According to the National Weather Service map for the watch, it includes parts of the Atlanta area south of I-20 such as Henry, Clayton, Rockdale, Newton, Fayette and Coweta Counties. The city of LaGrange also falls within the watch area.

How to tell the difference between allergies and coronavirus symptoms