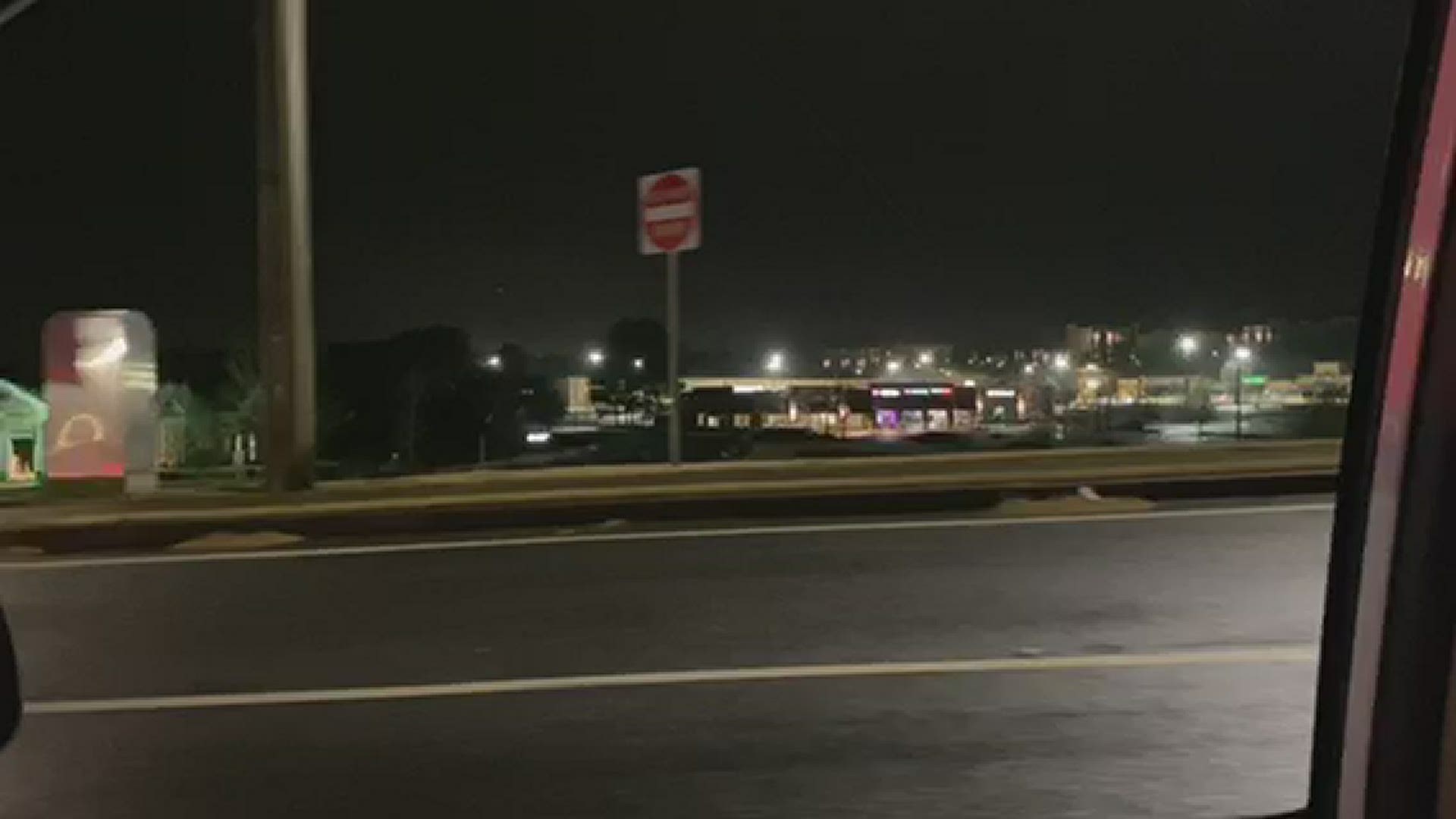 ATLANTA — The 11Alive StormTrackers are keeping an eye on weather conditions as rain and storms move through the area.

Scattered showers are working their way across North Georgia this evening as a warm front pushes through the state. With the winds from the south, it will be warmer and wetter to start the week. In addition to scattered showers during the day, we expect some storms tonight into early Tuesday morning.

Critical timing for heavier showers and a few storms will be 11 p.m. Monday to 8 a.m. Tuesday.

7:00 a.m. | The storm system has passed through the metro area now, and things should be clearing up for the rest of the morning.

6:55 a.m. | The severe thunderstorm warning has been canceled in Henry and Newton counties, as well. Continues in Butts and Jasper through to 7 a.m.

6:45 a.m. | The severe thunderstorm warning has been canceled in Spalding County.

6:25 a.m. | Here's the latest as the storms sweep through the counties south of Atlanta. Peachtree City, McDonough some of the cities that have been affected. Griffin and Locust Grove in the path. 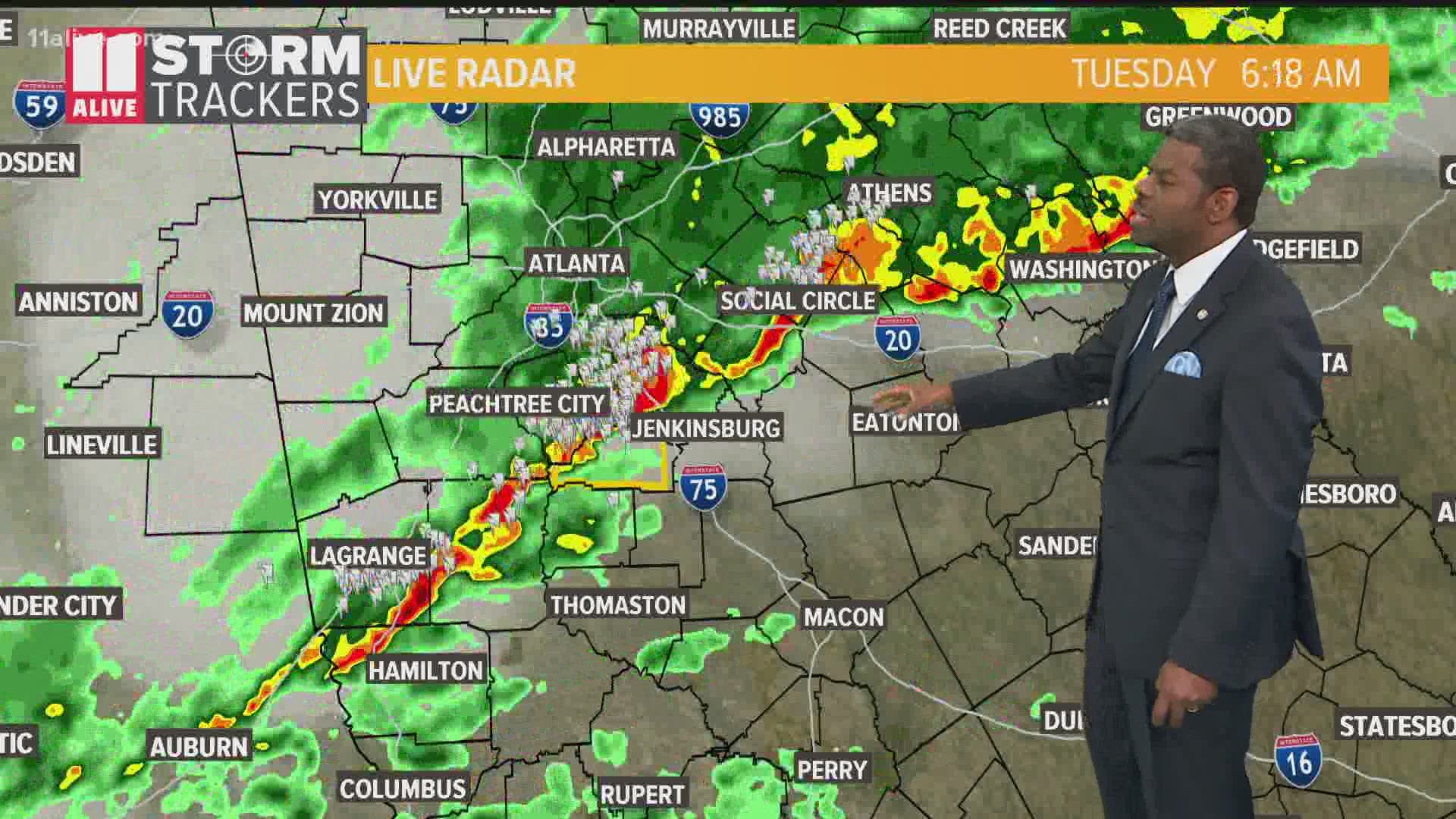 6:10 a.m. | A severe thunderstorm warning has been issued for Fayette and Spalding counties until 7 a.m..

5:58 a.m. | All those mounting outages in Newnan, storm must have hit them hard down there.

5:55 a.m. | We're starting to see some outages associated with these storms now too. More than 1,700 customers without power in the Newnan area, 400+ up in the Canton area in Cherokee County, 200+ in Sandy Springs, 145 people in the Gresham Park neighborhood in southeast Atlanta. Check outages here.

5:55 a.m. | Looks like that line passed over Newnan a short while ago and should be around Peachtree City now.

5:40 a.m. | Looks like this severe thunderstorm warning will be focused on Newnan, Peachtree City, Fayetteville.

5:35 a.m. | A severe thunderstorm warning has been issued for Fayette and Coweta counties until 6:15 a.m.

5:30 a.m. | National Weather Service issued this bulletin on canceling the remainder of the tornado watch as the line of storms has shifted a bit south (hence the new advisory over Heard/Troup/Coweta): "The strongest storms have now moved south of that Watch area. The tornado threat has lessened, but an isolated damaging wind gust cannot be ruled out. Locally heavy rainfall will also continue to be possible."

5:20 a.m. | Here's a look from 11Alive's Joe Ripley as those storms moved over Atlanta a short while ago. Be careful on the roads!

Been a while since we had this much weather in the heart of a rush hour, already seeing multiple wrecks. Please slow down. @11AliveTraffic #MorningRushATL #11alive

5:15 a.m. | Looking ahead to where that broken line of storms coming in from Alabama to the west has continued to bring up patches of quick-hitting thunderstorms, a significant weather advisory is on the lookout until 5:45 a.m. for western Coweta, northern Troup and Heard counties

5:10 a.m. | The Tornado Watch that had remained in Carroll, Cobb, Paulding and Douglas has been canceled.

5:05 a.m. | Some heavy rains falling over midtown and downtown Atlanta.

5:00 a.m. | Looking ahead over the next hour, looks like most of the hard rain will be concentrated northeast over Gwinnett, north Atlanta could also feel it for a minute, before the system begins to kind of clear out of the metro.

4:50 a.m. | Really a thin line stretch west to east over various parts of the metro. Carrollton to South Fulton before following up I-285 a bit to Sandy Springs, and then over Lawrenceville, Lilburn and Snellville to the east of there. Again though, no active warnings at the moment.

4:45 a.m. | Going by the 11Alive Radar, looks like some nasty stuff over Sandy Springs and north Fulton passing through. 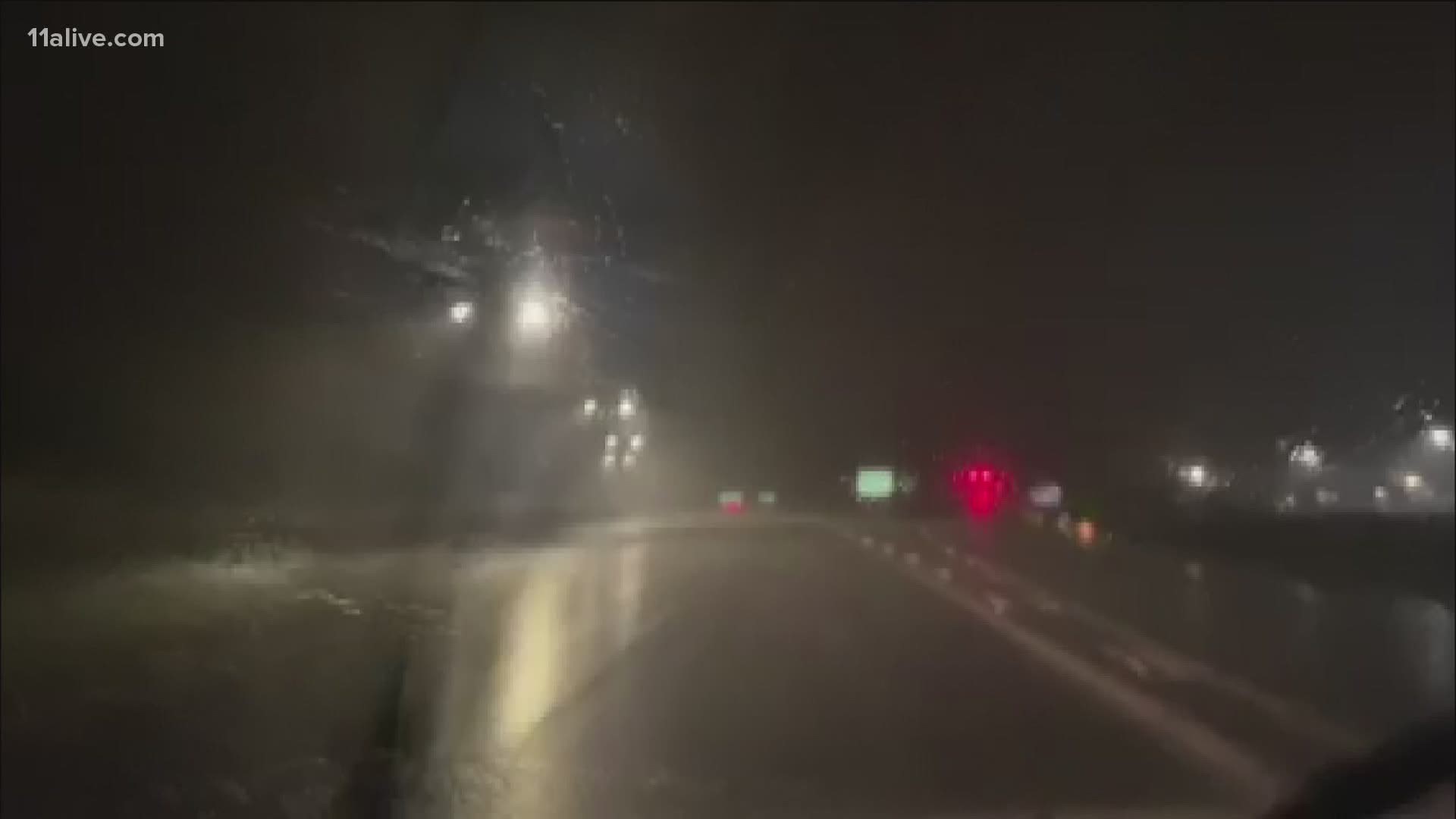 4:30 a.m. | If you're up and hearing the rain/thunder and seeing the lightning, this is probably going to continue off and on a bit more this morning. The line is coming in from the west and won't really fully clear up until about 8 a.m.

4:20 a.m. | Some heavy rains, thunder/lightning moving through over Cobb/Paulding, but no warnings issued as of yet.

4:15 a.m. | The Tornado Watch has been canceled in Cherokee, Haralson and Polk counties. Continuing through 7 a.m. in Cobb, Douglas, Paulding and Carroll.

4:10 a.m. | Follow the 11Alive radar for the latest track of things. The next 20-30 minutes we might see some renewed activity.

4:00 a.m. | If you're in places like Dallas, Kennesaw or Woodstock, looks like there's gonna be a good bit of rain over you at the moment. No warnings out at the moment though.

3:50 a.m. | Floyd and Bartow counties were removed from the Tornado Watch that's in place until 7 a.m.

3:50 a.m. | A significant weather advisory is in place for mainly north Cobb and parts of Cherokee and Paulding through 4:30 a.m., noting that there could be more strong thunderstorms on the way.

3:30 a.m. | Stay alert, as the National Weather Service reports a "broken line of storms" that could bring renewed severe weather over the next couple hours. A Tornado Watch continues in northwest metro Atlanta region until 7 a.m. this morning.

2:30 a.m. | The National Weather Service has canceled the Tornado Warning for Cobb County.

2:22 a.m. | The Tornado Warning for Cherokee and Paulding has been lifted but it continues for Cobb County until 2:45 a.m.

2:17 a.m. | A Tornado Warning has been issued for portions of Cherokee, Cobb and Paulding counties until 2:45 a.m.

2:06 a.m. | A Severe Thunderstorm Warning has been issued for Bartow, Cherokee, Cobb and Paulding counties until 2:45 a.m.

1:37 a.m. | A tornado watch has been issued for Bartow, Carroll, Cherokee, Cobb, Douglas, Floyd, Haralson, Paulding and Polk counties until 7 a.m. EST and Cleburne and Randolph counties until 6 a.m. CST.

1:32 a.m. | The Tornado Warning for Cleburne, Calhoun and Cherokee counties in Alabama has been canceled according to the National Weather Service.

1:08 a.m. | A tornado warning has been issued for Cleburne, Cherokee and Calhoun counties in Alabama until 12:45 a.m. CST. A severe thunderstorm capable of producing a tornado was located over Piedmont, moving east at 45 mph.

A tornado warning is in effect for Calhoun, Cherokee, Cleburne until 1/26 12:45AM. Tune into 11Alive for the latest weather information pic.twitter.com/QIPrqkSoTw