This brings the total to six confirmed tornadoes from the storms on Monday and Tuesday. 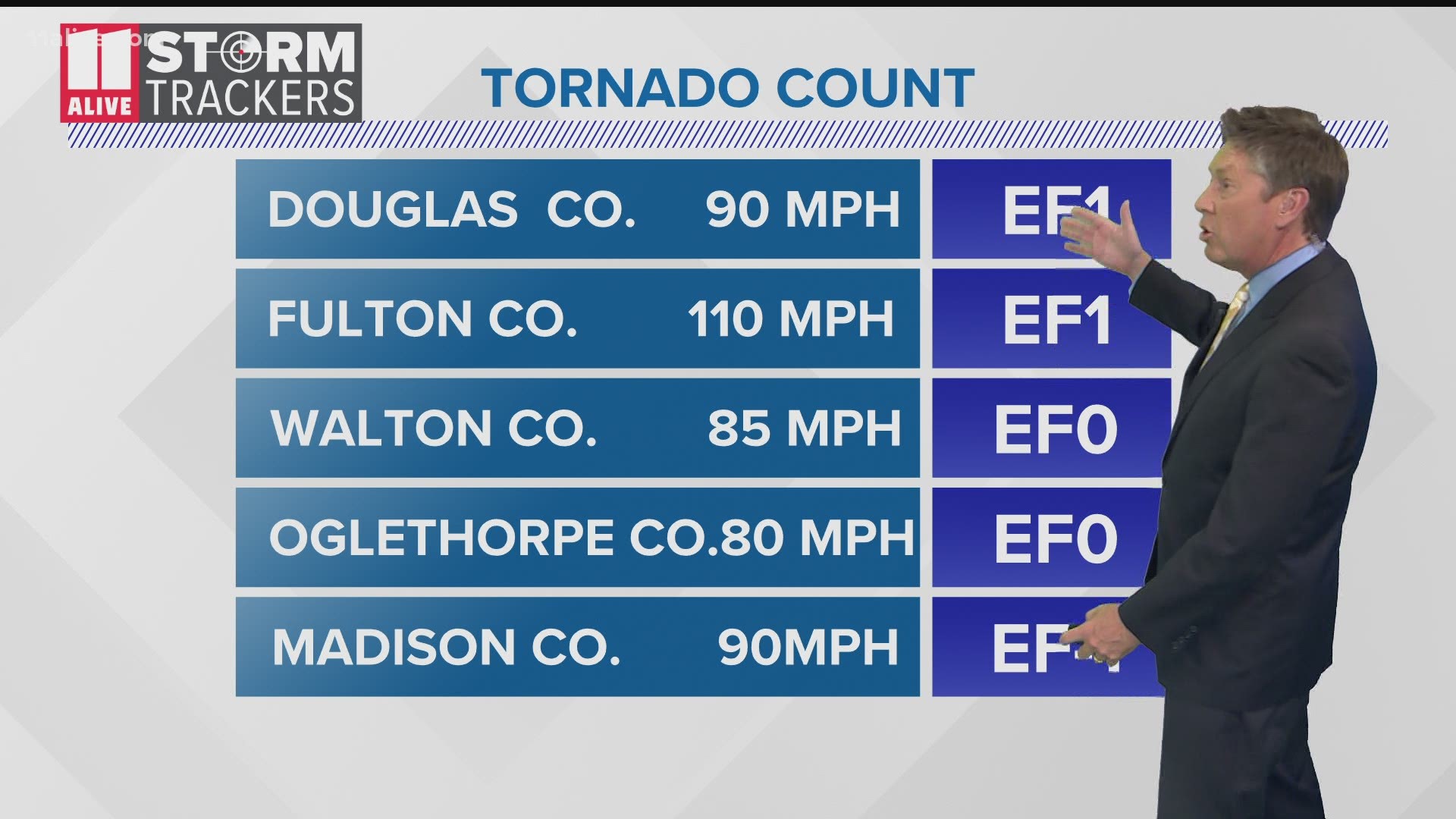 WALTON COUNTY, Ga. — The National Weather Service (NWS) confirmed Thursday four more tornadoes touched down in Georgia as a result of the storms on Monday and Tuesday.

The NWS said an EF-0 tornado touched down Monday in Walton County shortly after 12:30 p.m. with 85 mph winds and the other EF-0 tornado in Oglethorpe County touched down approximately one hour later with 80 mph winds. An EF-1 tornado left damage behind in Madison County after moving through the area just before 1 p.m.

According to the NWS, the tornado in Walton County traveled 1.4 miles and spanned 200 yards wide. The tornado briefly touched down in a rural part of northern Walton County, snapping several trees along Ike Stone Road NW.

The NWS reported there was minor structural damage to a fence and home between Beagle Run and Paul Verner road. The tornado then lifted to the Stone Road and Mt. Vernon Road area, where there was not any additional damage, NWS said.

The NWS also said the roof was blown off of a small barn in the area and the tornado lifted just south of Hargrove Lake Road, where a few more snapped tree limbs were found.

In Madison County, the NWS said an EF-1 tornado developed Monday afternoon, around the same time as the Walton County tornado, out of a supercell storm. The twister damaged trees east of Highway 106 near the Neese Community along Willis Glenn Road. The tornado went northeast, crossed Sanders Road and Stone Creek Drive where several trees were also snapped or uprooted. Homes were also damaged, including a house on Strockland Circle where a tree fell on a home.

This tornado had estimated peak winds of 90 mph. It was about 205 yards wide and traveled the path length of about 5.6 miles.

And in Lumpkin County, the NWS said another EF-0 tornado touched down Tuesday afternoon shortly before 1:30 p.m. The tornado had winds up to 85 mph, about 350 yards wide and traveled 4.8 miles. The NWS said more trees were uprooted and there was minor damage to a few houses and sheds.

Lumpkin County Emergency Management Agency surveyed the damage and determined the tornado touched down around Long Branch and Robinson Road. The tornado then continued east along Red Oaks Flats road through a rural area, then hit its peak winds between Meeks and Pecks Road. The tornado picked up again just off Pecks Road near Brewer Drive, where several large trees were uprooted.

Earlier this week, the NWS confirmed two other EF-1 tornadoes in Douglas County and South Fulton from the same storm. That brings the total to five confirmed tornadoes from Monday.