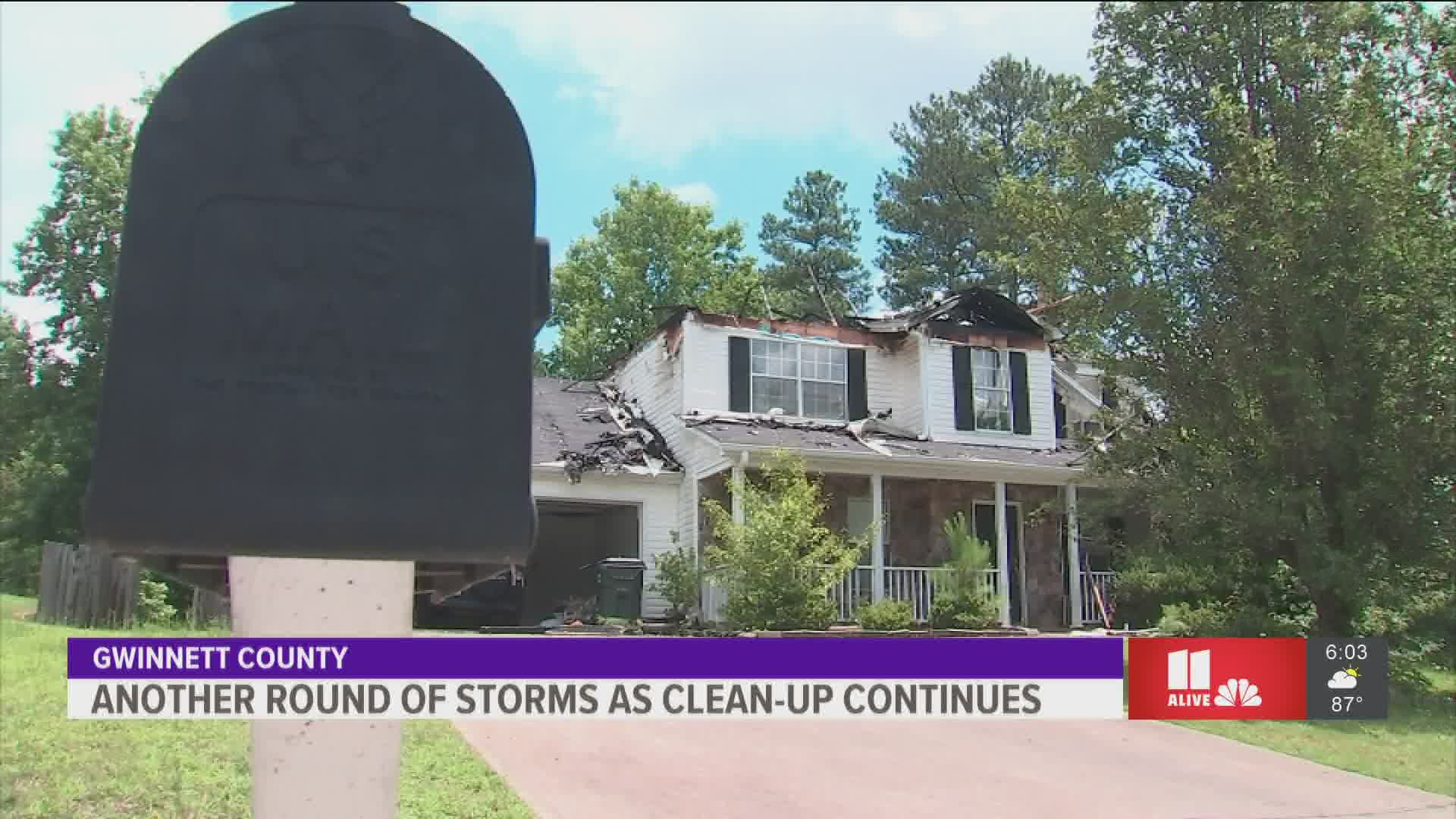 GWINNETT COUNTY, Ga. — During Saturday's round of severe storms, Gwinnett County Fire and Emergency Services received a large number of calls for service as a result of storms that passed through the county.

No major injuries were reported as a result, however.

Firefighters responded to a house fire at about 5:24 pm in the 4400 block of Brookridge Drive SW in the unincorporated part of the county near Loganville. A neighbor advised 911 dispatchers that the house had been struck by lightning.

According to Lt. Justin Wilson of the Gwinnett County Fire Department, when firefighters arrived, they found a two-story home with heavy fire involvement in the attic and throughout the second floor.

The first crew that arrived used the deck gun to knock down the bulk of the flames.

Search crews located a dog and cat as they worked to extinguish the flames inside the home. They were removed safely and are doing well, Wilson said.

He said that while firefighters were battling the fire, the resident returned home and requested help from the American Red Cross for her and her pets.

According to a neighbor, a loud boom was heard as the severe thunderstorm moved through the area. When the neighbor went outside to check on the house, the house next door was on fire, Wilson said.

As a result of the neighbor's report and the strong line of storms moving through the area, a lightning strike was determined to be the cause of the fire, he said.

Wilson said that three engines, one truck, one squad, one air/light unit, one medic unit and two battalion chiefs were used to battle the blaze.

A bit earlier -- at 4:48 pm, crews responded to a report of multiple people stranded on the Chattahoochee River at Abbotts Bridge in Duluth.

According to Wilson, The group was part of a tubing company tour enjoying the afternoon on the river that became stranded when the strong thunderstorms moved in, causing conditions on the river to become turbulent.

Gwinnett County Fire and Emergency Services, along with the Johns Creek Fire Department responded, due to the location on the river, as well as the report of multiple people needing assistance, Wilson said.

Both crews began to remove people from the water and placing them on the riverbank, Wilson said.

The first crews that arrived positioned their equipment on Abbotts Bridge and began operations directly under the bridge.

A large group had already gotten out of the water and were taking shelter under the bridge from the storm, Wilson said.

The threat from the lightning and winds made it impossible for the large group of people to remain underneath the bridge, he said.

Firefighters were able to move the people to a staging hut that belonged to the river tubing company a short distance away.

Wilson said that during the approximately two-hour-long incident, a total of 111 people were helped to safety until the storm passed.

About 35 people were helped by rescue boats from Johns Creek and Gwinnett fire departments, Wilson said. A local fisherman also pitched in to help get a number of people to safety.

According to Wilson, most of the people were able to walk, and there were no injuries or issues.

Wilson said that Gwinnett County crews participating in the incident included one truck, two medic units, one Swiftwater rescue unit, one rescue boat and one battalion chief, plus additional equipment from the Johns Creek Fire Department, including their rescue boat.

The county was under a severe thunderstorm warning from 4:59 pm to 5:30 pm, Wilson said. As a result of the many calls for service, the department implemented its fire emergency operations plan at 5:48 pm, he said. They returned to normal operations at 7:12 pm.

RELATED: Be prepared for severe weather in your area

RELATED: How to prepare for severe weather