The storms caused downed power lines, a gas leak and roofs ripped off homes. A pair of tornadoes touched down in Maryland Wednesday. 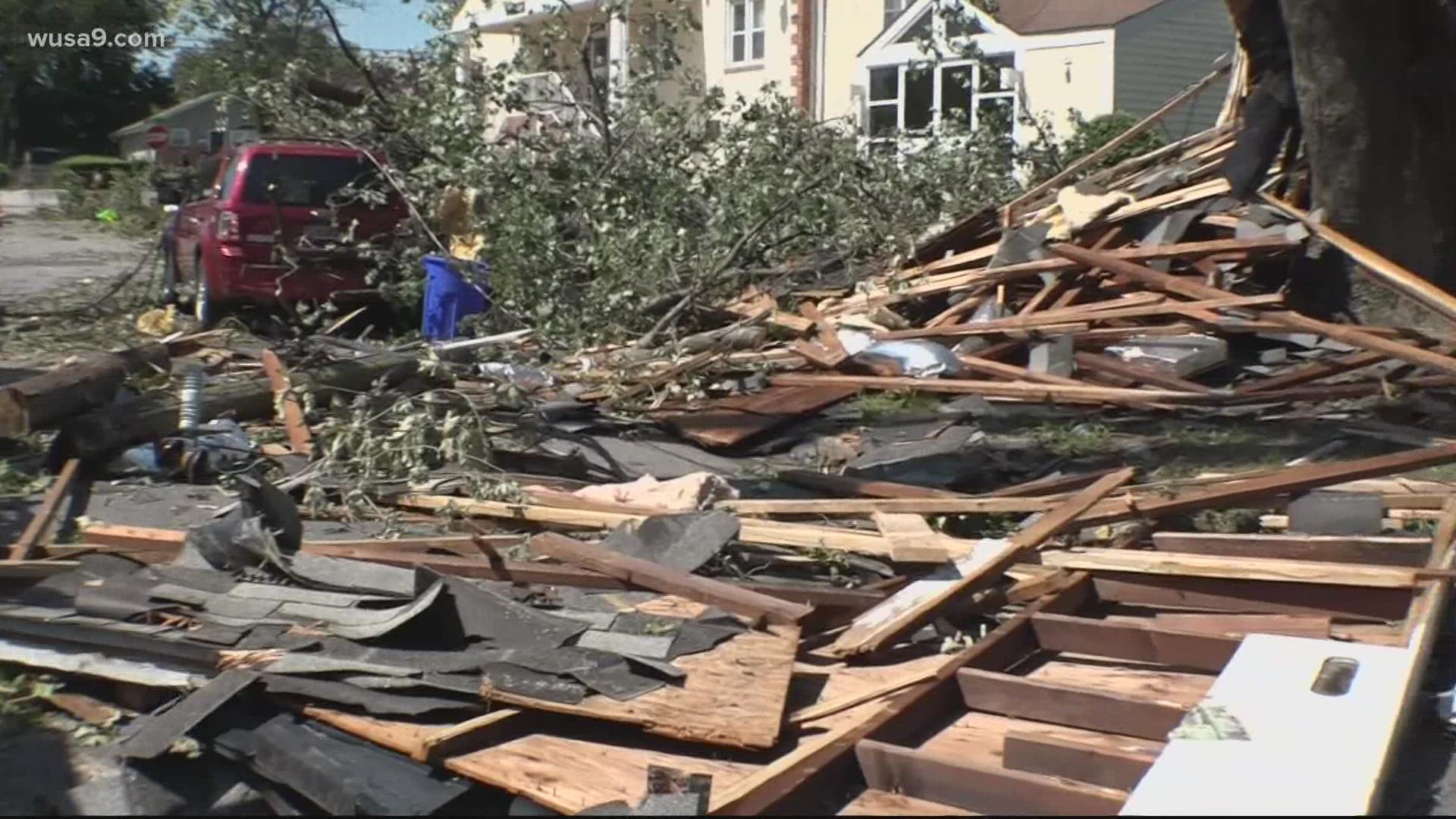 WASHINGTON — Residents across the DMV will look to pick up the pieces and assess damage Thursday after remnants of Ida slammed the region Wednesday, hitting Maryland particularly hard.

Severe storms and heavy downpours throughout Wednesday left some areas in the region with flooding, downed trees, power outages and prompted a few school closures.

At least two tornadoes touched down Wednesday afternoon in Maryland, according to the National Weather Service (NWS). The first touch-down occurred near Allens Fresh in Charles County. No damage has been reported as of Thursday morning.

According to a tweet from the National Weather Service, winds peaked at 125 miles per hour during the tornado. The twister was 200 yards wide and its path spanned more than 11 miles.

One fatality has been reported in relation to the storms. A 19-year-old drowned early Wednesday morning after his Rockville apartment completely flooded.

Here's a timeline of how the storm unfolded Wednesday into Thursday:

3:05 p.m.: According to the City of Annapolis, 38 people were displaced with 3 buildings destroyed, 24 condemned, 26 structures had major damage, and 49 with minor damage.

11:15 a.m. -- Here are the latest rain totals from Ida's impact in the DMV region. Some areas reached up to six inches of rain:

8:10 a.m. --  A missing resident of the Rock Creek Woods apartment complex in Rockville has been located safe and unharmed. Montgomery County Police said the resident was out of state and has communicated with police.

7:10 a.m. -- Crews were spotted in the area preparing to clean up much of West Street in Anne Arundel County where hundreds of neighbors were left with serious damage from Wednesday storms.

6:53 a.m. -- Frederick County Public Schools will be closed Thursday. Officials said offices will be opening on a 2-hour delay. All FCPS and community-group afterschool & evening activities are canceled or postponed.

6:48 a.m. -- Flooding has shut down Woodbourne Road in Annadale, Va. The road is closed at Spicewood Drive.

6:31 a.m. -- WUSA9's Nicole DiAntonio is on West Street outside of Annapolis in Anne Arundel County where about 100 different homes have severe damage due to Wednesday's storm. She said a tree was uprooted and several residents are left without power. Many neighbors woke Thursday morning to assess the damage in their neighborhood.

Tornadoes touch down in Charles County and Anne Arundel County as remnants of Ida hit parts of Maryland.
Here’s an update on the cleanup happening today…@wusa9 @GetUpDC pic.twitter.com/5dEMSJIvfh

6:11 a.m.-- We spoke to a resident in Anne Arundel County who said there was so much devastation and she had never seen something like this in Annapolis.

"For it to come through here and do this much devastation I don't even have the words," said Jackie."I woke to helicopters flying over..."

4:40 a.m. -- A fallen tree has shut down both ways of Maryland Route 97 at Georgia Avenue between MD-650 and Tridelphia Lake Road.

4:37 a.m. -- Roads are closed on Sligo Creek Parkway between University Boulevard and New Hampshire Avenue and Beach Drive between Garrett Park Road and the MD-DC line.

4:15 a.m. -- Maintenance crews are at South River High School in Edgewater, Md. cleaning up damage to parts of the school building in preparation for the first day of school next week.

12:30 a.m. - Dominion Energy's power outage map shows just slightly more than 900 customers without power. Pepco's outage map shows 186 customers affected. There is still no confirmation on when the remaining outages will be fixed.

RELATED: Roof blown off of Edgewater home by tornado

Here’s a look at some of the tornado damage at South River High School in Edgewater, Md. There’s damage to parts of the school building as well as the high school football stadium. Maintenance crews are now cleaning up in preparation for the first day of school next week. @wusa9 pic.twitter.com/P0DOBRwzOA

10 p.m. - According to Maryland State Police, officers responded to 163 crashes, 34 disabled/abandoned vehicles and answered 789 calls for help when the remnants of Hurricane Ida hit the DMV.

#UPDATE From 6 am to 9 pm, @MDSP responded to 163 crashes and 34 disabled/abandoned vehicles and answered 789 calls for service. pic.twitter.com/fxtzlWezJx

Baker Park in Frederick, MD looks like a mini Niagara Falls right now. But believe it or not this is actually a flood mitigation system! The town flooded in the 70s and so the city created a way to divert all the flood waters through this park and away from town. pic.twitter.com/P3KMfzorFk

5:30 p.m. - The Frederick County PIO confirmed that, due to the number of water rescues in the county, school buses would be sent back to schools and parents will need to now make arrangements to pick up their students. There had been a total of 83 road closures between flooding/construction in Frederick County, according to the fire department. The team received 17 water rescue calls and 39 flooding condition service calls in the last 24 hours.

"Please avoid travel as the next band of heavy rain is coming through!!" they said in a statement.

5:20 p.m. - A number of metro stations closed with shuttle bus replacements on the Green and Yellow lines. Click here for details.

"Metro’s Emergency Operations Center has been activated to continue managing the storm response and coordinate additional resources that can rapidly deploy to weather-related incidents as necessary. We also have extra maintenance teams on standby at strategic locations across the system to respond to any operational issues," WMATA confirmed in a statement.

4:50 p.m. - The Frederick County Sheriff's Office conducted a water rescue on Old Frederick Road at Lloyd Station, where a car was stranded in floodwater. Drivers were encouraged to stay off roads in the county, as water was constantly rising. View their message in the video below. 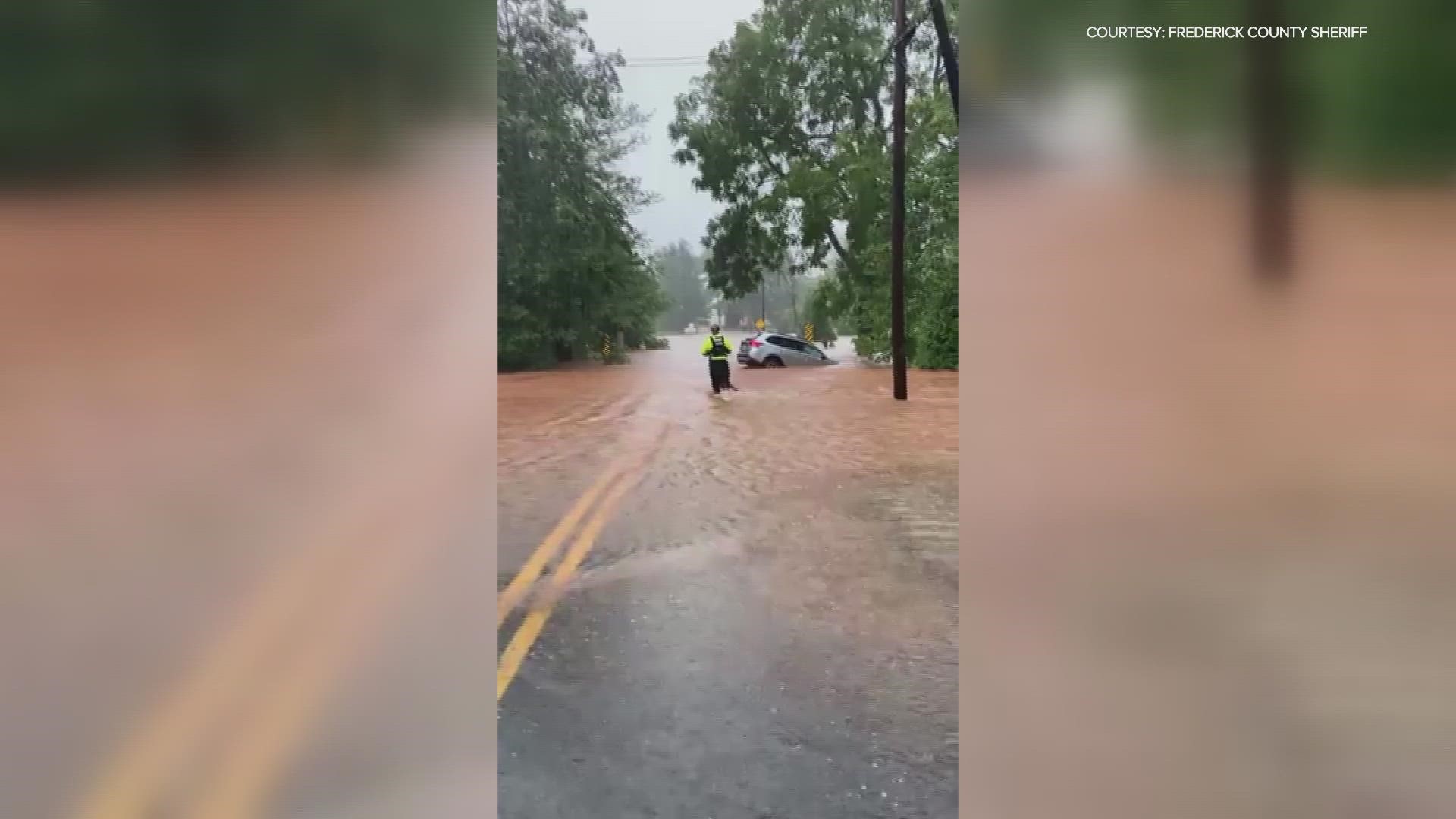 Just behind the school, the Center of Applied Technology South also faced damaged during the day's storms. A school spokesperson said that a school board meeting was happening at the time, but no one was hurt.

Here’s a look at the damage done to the Center of Applied Technology South behind South River.

We’re told South River welcomed those teachers inside to escape the damage once the tornado passed. @wusa9 pic.twitter.com/JO2zbN7L1O

4:20 p.m. -  A 1/4 mile stretch of West Street in Annapolis was evacuated due to a gas leak and power line damage. Army and Air Force recruiters helped with evacuations.

"I can smell the natural gas additive in the air," WUSA9's Adam Longo tweeted from the scene.

4:10 P.M. - A roof was ripped off of a house in the South River Colony in Edgewater, Anne Arundel County, Maryland. The scene is pictured below. The county faced a touched-down tornado just before 2:30 p.m.Wednesday.

RELATED: Roof blown off of Edgewater home by tornado

Neighbors stepping in to help on South River Colony after tornado touched down destroying nearby homes @wusa9 pic.twitter.com/385RU0SUTK

4:10 p.m. - Mount St. Mary’s Seminary/University had water inside several buildings, including the basement of Immaculate Conception Chapel and the first floor of Delaplaine Fine Arts Center after flash floods hit the campus. 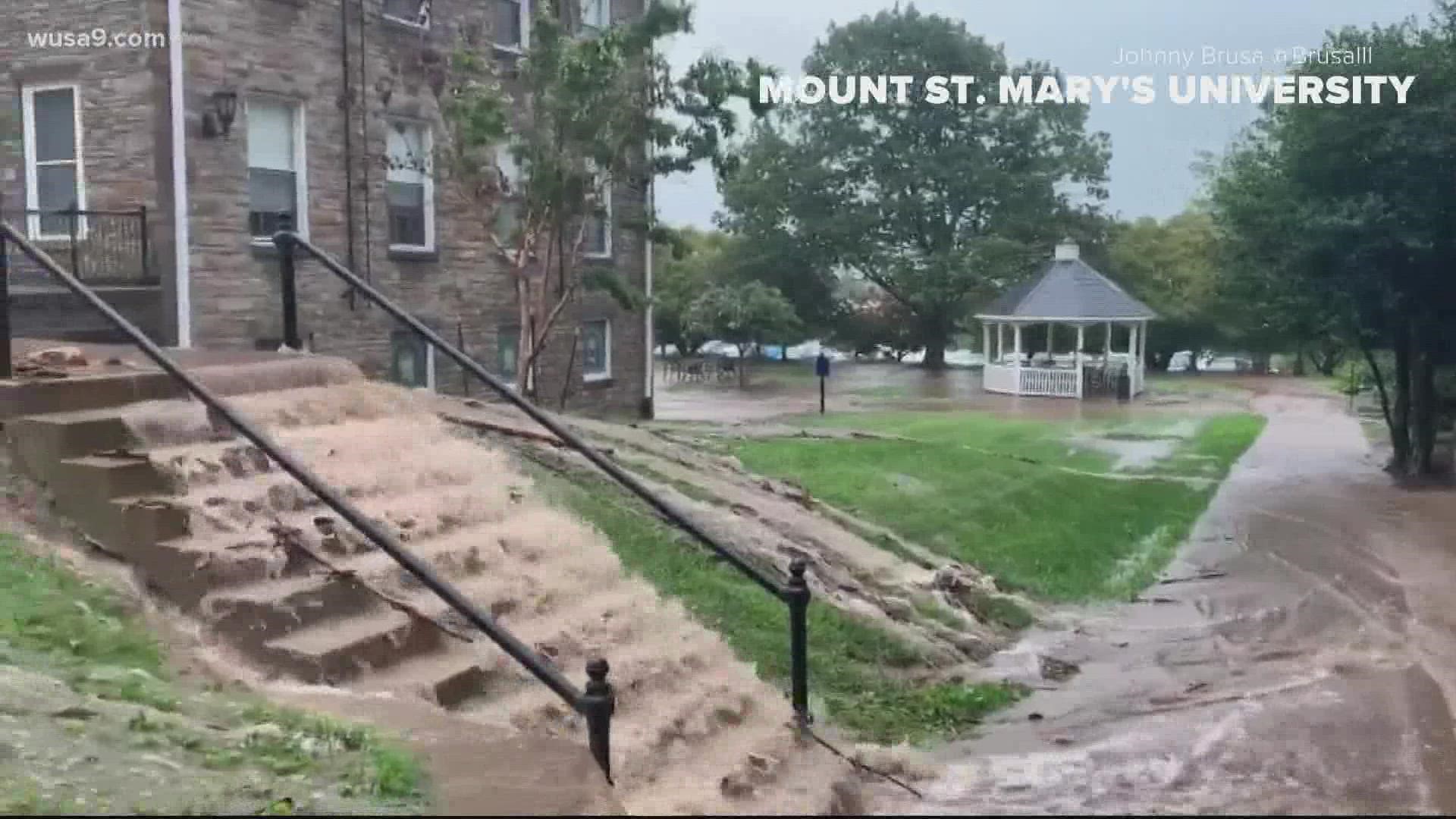 3:49 p.m. -  The Frederick County Sheriff's Office confirmed the water rescue of a third school bus on IAO New Design Road and Mountville Road, involving 12 students and their driver. All were successfully rescued.

3:24 p.m. - The City of Annapolis tweeted that West Street was closed between Chinquapin Round and Route 2 due to storm damage. "AVOID THE AREA," their post reads.

3:17 p.m. - A Tornado Warning for Edgewood, Aberdeen and Perryman Maryland was issued.

2:59 p.m. - A water rescue of a school bus stuck on Hessong Bridge Road and Blacks Mill Road has been confirmed by the Frederick County Sheriff's Office. Rescuers used boats to ferry 10 students and one driver to safety.

2:30 p.m. - A Flash Flood Warning was issued for Frederick and Carroll counties.

2:29 p.m. - Green Line Alert: Train service was temporarily suspended between Branch Ave and Suitland as a safety precaution. Metrobus K12 was available between Suitland and Branch Ave, according to WMATA.

2:19 p.m. - A tornado touched down in Anne Arundel County near Londowntowne, moving through downtown Annapolis, according to NWS.

MAJOR damage along West Street In Annapolis after a possible tornado impacted the area. @wusa9 pic.twitter.com/8ZZKqNj5YU

2 p.m. - A Tornado Warning was issued for Anne Arundel County.

1:59 p.m. - Decatur Road in Stafford County was closed as crews work to remove a downed tractor-trailer, pictured below, according to the Sheriff's Office.

1:50 p.m. - A tornado touched down near Allens Fresh in Charles County, Maryland, according to the NWS. No damage has been reported yet.

1:37 p.m. - The following roads in Fairfax County were either shut down or experiencing traffic impacts due to weather damage caused by storms and rain Wednesday:

Click here to check the Dominion Energy outages in your area.

Click here to check the Pepco outages in your area.

11:34 a.m. - Montgomery County Public Schools announced that it will dismiss students 2.5 early due to the severe weather.

11 a.m. - A Flash Flood Watch was issued for the entire DMV, from Wednesday to 8 a.m. Thursday.

A tornado watch has been issued for parts of DC, MD, NC, VA until 7 PM EDT. pic.twitter.com/UfPt47nDAs

HEAVY RAIN coming our way this afternoon. Most will see another 2" or so. Some may see up to 4" with these tropical downpours. More @ https://t.co/KUHKNnr3Cp @wusa9 @TenaciousTopper @MiriWeather #DCwx #Maryland #Virginia #WUSA9Weather #WashingtonDC #Ida pic.twitter.com/Pj5aB3Dgsv

Take a look at this! A man shared this video with me of the water rushing into his terrace level apartment. @wusa9 @DCAllisontv @AnnieYuTV @TonyPerkinsFMTV pic.twitter.com/ZvbIRPLRNl

A much different look from just a few hours ago. The water has been pumped out of this courtyard. Tears and cries can be heard as people are processing this devastating news of one person having died. @wusa9 pic.twitter.com/48CnHQgNNh

We are in Hagerstown where flooding is going to be the biggest threat today. The city has blocked a part of W Memorial Blvd to prevent people from driving under the bridge where flooding happens frequently. @wusa9 pic.twitter.com/YYHLDIoge4 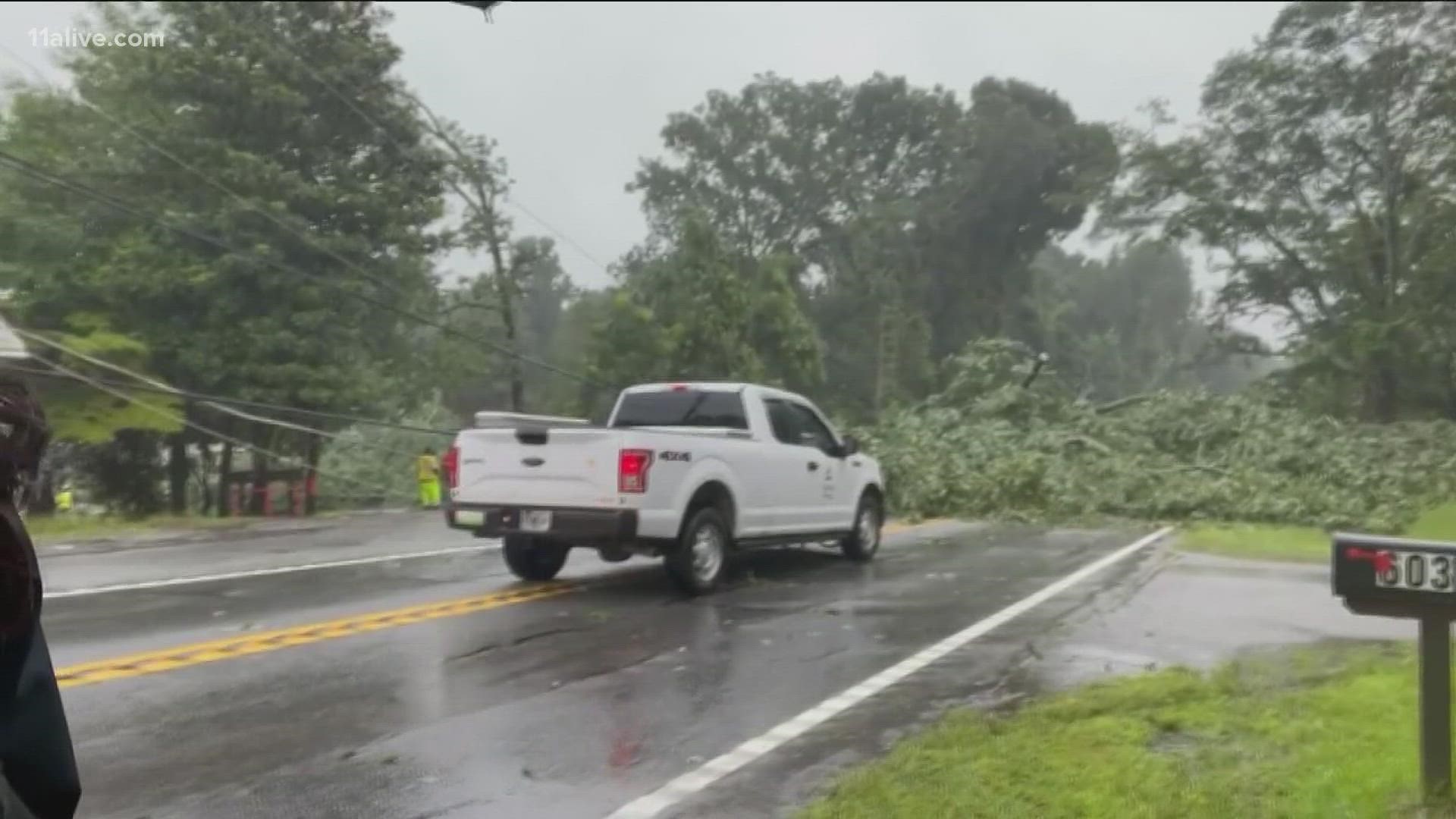