Refresh this page for the latest updates 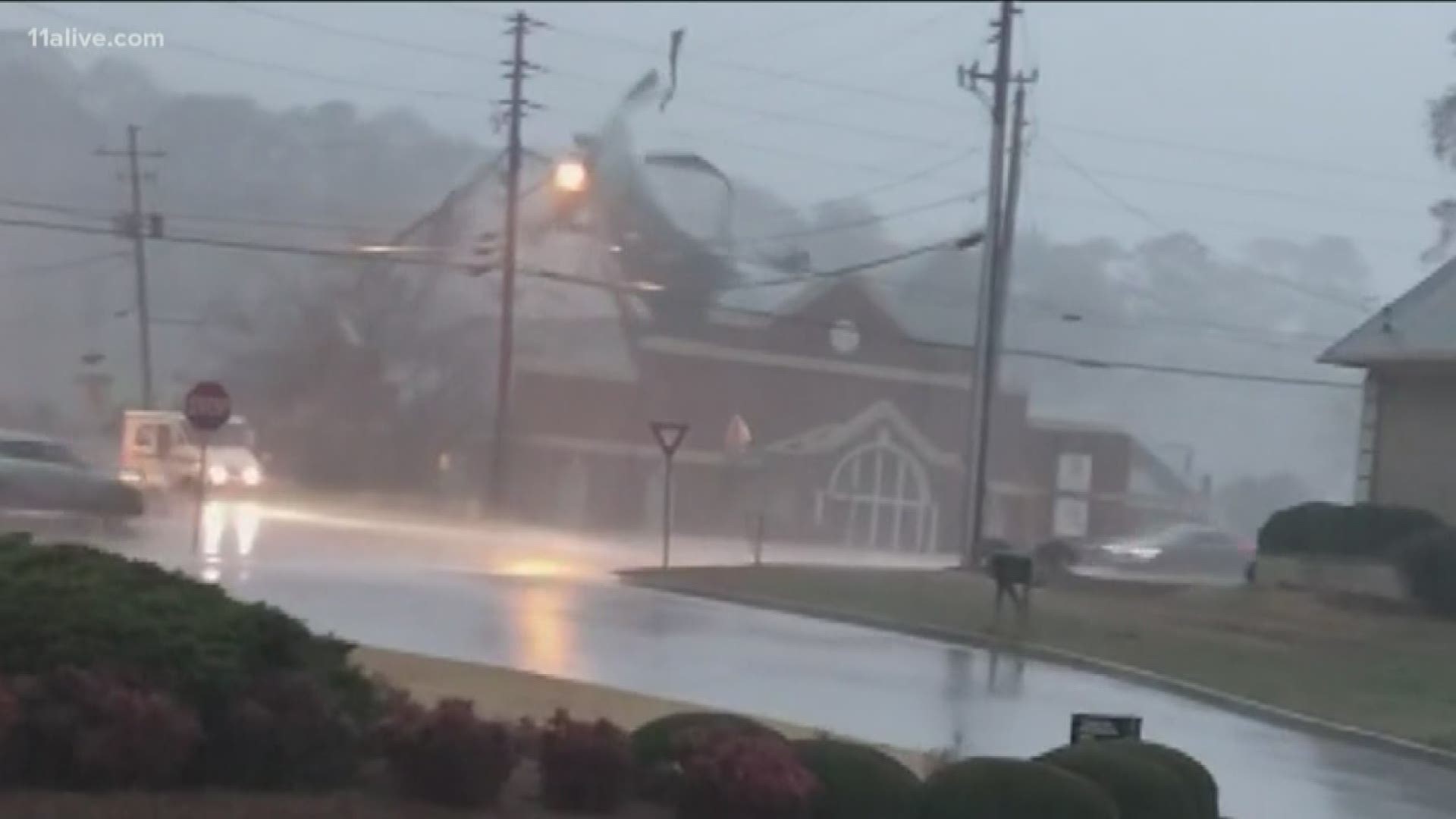 ATLANTA — Severe storms moved through north Georgia and metro Atlanta as part of a major severe weather outbreak across the South.

TIMELINE | When to expect tornadoes, severe weather on Saturday in north Georgia

7:00 pm | Sandy Springs Police report wind has moved the signal mast arm at Dalrymple and Roswell roads. Motorists are being told to treat the intersection as a four-way stop.

6:47 pm | Reports of trees and power lines down throughout Habersham County. The Sheriff's office is telling the public to use caution and treat all downed power lines as if they are live.

6:47 pm | The Severe Thunderstorm Warnings for DeKalb, Rockdale and Walton counties have been canceled but will continue for Butts, Jasper and Newton counties until 7 p.m.

6:45 pm | Gainesville Police shared a video of heavy rain and standing water on roads as they reiterated the severity of the evening's Tornado Watch and Severe Thunderstorm Warning. They, like many other departments, urged the public to use extreme caution.

6:42 pm | Carrollton Police shared a photo showing a beautiful sunset after a massive storm passed through Carroll County in the evening hours. They added that the city had no reports of injuries and thanked partnering agencies for their assistance.

6:35 pm | The Severe Thunderstorm Warning has been canceled for Lamar and Upson counties but continues for Crawford, Monroe, and Taylor until 7 p.m.

6:34 pm | Heavy rain and lightning in Johns Creek this afternoon.

6:31 pm | The Severe Thunderstorm Warning has been canceled for Henry and Spalding counties but continues for Butts, DeKalb, Jasper, Newton, Rockdale and Walton counties until 7 p.m.

6:30 pm | 115,000 customers without power across Georgia based on latest numbers from Georgia Power and Georgia EMC.

6:18 pm | Cherokee County EMA reports numerous trees and power lines down in the county with about 3,500 residents without power.

6:13 pm | A severe thunderstorm warning has been issued for Butts, DeKalb, Henry, Jasper, Newton, Rockdale, Spalding and Walton until 7 p.m.

6:12 pm | A severe thunderstorm warning has been issued for Banks, Barrow, Gwinnett, Hall, Jackson and Walton counties until 7 p.m.

6:07 pm | Dunwoody Police suggest they are aware of "large scale outages" and trees down around the city. I-285 west flooded at Ashford Dunwoody Road. They are urging motorists to stay off the road.

5:59 pm | The NWS has canceled the Severe Thunderstorm Warning for Coweta and Meriwether counties but is continuing them for Clayton, Fayette, Henry, Lamar, Pike, Spalding, Talbot and Upson counties until 6:15 p.m.

5:51 pm | A Severe Thunderstorm Warning has been continued for Dawson, Hall, Lumpkin, Towns, Union and White until 6:15 p.m.

1 / 19
James Parker, Armuchee, Ga.
James Parker from our 11Alive StormTrackers' Group said two trees fell across his driveway in Armuchee, Ga. Both snapped off about 12 feet above the ground.

5:46 pm | Locals are reporting a power outage at the Walmart on Howell Mill in Atlanta as customers are being asked to leave the store. 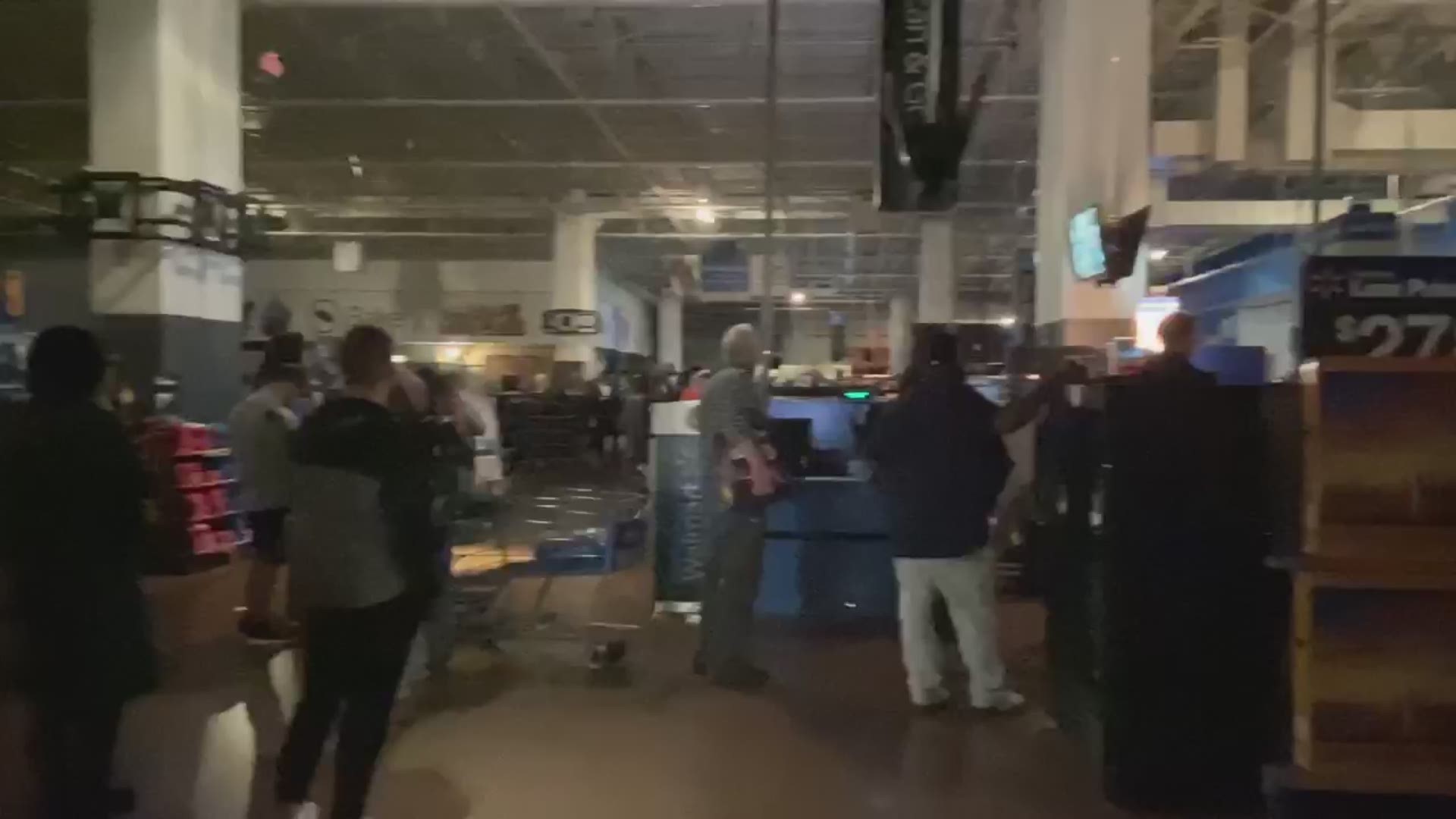 5:45 pm | NWS reports tornados possible with wind up to 60 mph and three-quarter-inch hail as Severe Thunderstorm Warning continues for Clayton, Coweta, Fayette, Henry, Lamar, Meriwether, Pike, Spalding, Talbot and Upson counties until 6:15 p.m. This, however, is NOT a tornado warning.

5:35 pm | Reports out of an automated airport weather station in Blairsville suggests thunderstorm wind gusts of up to 61 mph in that part of Union County.

5:35 pm | A new tornado watch has been issued for portions of east and northeast Georgia until midnight.

5:27 pm | Hartsfield-Jackson International Airport is now under a ground stop for inbound flights.

5:25 pm | A Severe Thunderstorm Warning has been issued for Clayton, DeKalb, Fayette, Forsyth, Fulton, Gwinnett and Hall counties until 6:15 p.m.

5:15 pm | Two amateur radio operators at Kennesaw State university reporting thunderstorm damage with trees down near the intersection of North Fork and Wade Green not far from the university.

5:13 pm | A Severe Thunderstorm Warning has been continued until 5:45 p.m. for Fannin, Gilmer, Pumpkin, Pickens and Union counties.

4:53 pm | The Tornado Watch has been for 15 counties with eight in Georgia including Catoosa, Chattooga, Dade, Floyd, Haralson, Polk, Walker and Whitfield.

4:49 pm | Power providers across Georgia are reporting a jump in outages to roughly 33,500 as storm moves to the east.

4:24 pm | A new update from Georgia Power shows significant power outages across three counties. Polk is showing 2,600, Chattooga 1,600 and Floyd 7,000. The Georgia Electric Membership Cooperative shows customers in excess of 7,200 without power in the northern region of the state. That's a majority of the 8,100 outages reported across Georgia.

These continue until 9 p.m.

4:16 pm | A Severe Thunderstorm Warning has been issued for Carroll and Heard counties until 5 p.m.

4:00 pm | Heavy winds quickly began causing damage in Rome as a line of storms moved from Alabama into Georgia. Among that damage was this building which 11Alive captured as winds picked up on Saturday afternoon. The video shows pieces of the roof flying off.

3:53 pm | A Severe Thunderstorm Warning has been issued for Carroll, Haralson and Polk counties until 4:45 p.m. Severe thunderstorms were located along a line extending from near Etna to near Edwardsville to Delta moving northeast at 60 mph.

3:41 pm | The Severe Thunderstorm Warning has been canceled for Dade County but continues for Catoosa, Chattooga, Floyd, Walker and Whitfield counties.

3:21 pm | The emergency manager in Lumpkin County is reporting non-thunderstorm wind damage in the Garland area including a tree down along Mountain Ridge Drive.

3:01 pm | A Severe Thunderstorm Warning has been issued until 3:45 pm for portions of Catoosa, Chattooga, Dade, Floyd, Walker and Whitfield counties.

1:21 pm | Officials have confirmed three deaths in Pickens County, Ala. near the city of Carrollton, Ala.

10:30 am | The National Weather Service has upgraded the Wind Advisory to a High Wind Warning for the higher elevation areas of the North Georgia Mountains, including portions of Dade, Walker, Catoosa, Whitfield, Murray, Fannin, Gilmer, Union, Towns, Chattooga, Gordon, Pickens, Lumpkin and Floyd counties, through 10 pm.

Sustained southerly winds of 20-to-25 mph are likely with gusts of 45-to-55 mph are possible.

Damaging winds will blow down trees and power lines in those areas and widespread power outages are possible. Travel will be difficult, especially for high-profile vehicles.

10 am | A Wind Advisory remains in effect for all of north and central Georgia until 10 pm Saturday evening. Southerly winds 15-to-25 mph with gusts up to 35 mph are possible.

With saturated soils, winds could uproot trees across the area, which could bring down power lines. Gusty winds may blow around unsecured objects.

9:55 am | At least one person was killed when a tree fell on a home during a severe storm near Shreveport, La., Friday night. Other deaths have been reported in Louisiana and Texas, along with three deaths in Alabama.

9:45 am | Carroll County EMA officials told 11Alive News that they have fully equipped crews on standby.

9:15 am | Tornado Watches now cover much of Alabama, as storms move eastward from Mississippi.

8 am | Severe Threat Update: After briefly being downgraded overnight, western Georgia is back to a Level 3 threat for severe weather for this afternoon.