Old man winter is months away, but the Farmers' Almanac already has their take on what it may hold. 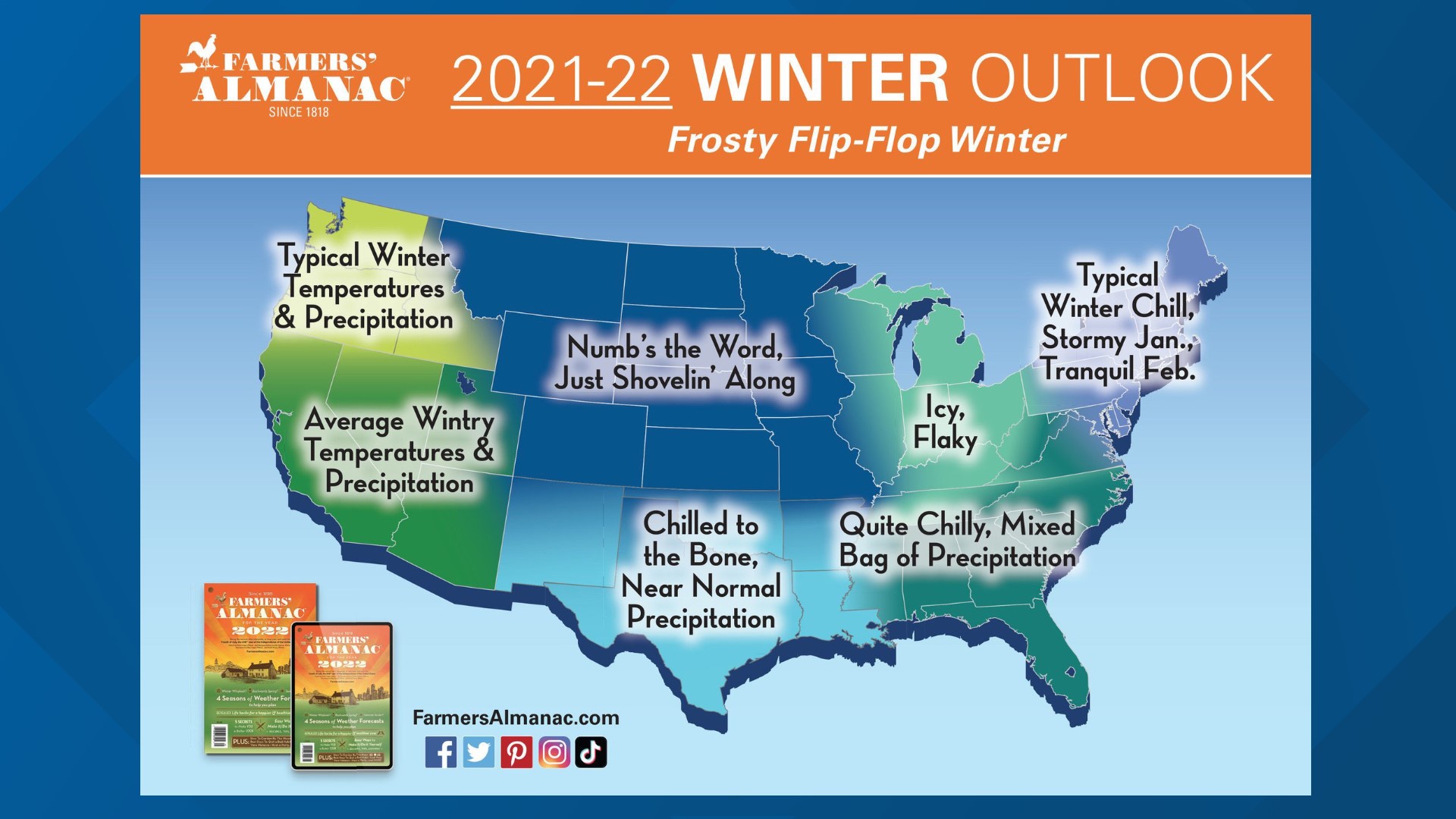 ATLANTA — Instead of sweating in the heat of summer, dream of colder days ahead. It's going to be a winter of flip-flop conditions and notable polar coaster swings in temperatures, according to the newly released Farmers' Almanac extended winter forecast.

They predict a fairly typical winter along the west coast, but for the northern tier to northeast, some winter chill and wintry weather is is in the cards.

For the southeast including Georgia and even Florida, it calls for a winter that is "quite chilly" with a "mixed bag of precipitation".

The Farmers' Almanac claims there will be near average snow from coast to coast, but probably not as much as snow sport enthusiasts would like. They pinpoint January as the most active and snowy month, especially for the eastern seaboard with the storm track heading right up the Atlantic coast.

But meanwhile a flip flop for February, claiming "on average there will be 57% fewer days of measurable precipitation compared to January, a significant drop-off."

Farmers' Almanac: How They 'Prognosticate' The Weather

As opposed to degreed meteorologists who look at seasonal trends in weather model data and longer-scale patterns like the El Nino Southern Oscillation, the Farmers' Almanac has a more unconventional approach to forecasting upcoming winters.

Their website briefs on this secret prediction formula, dating back to their founding editor in 1818. They use mathematics and astronomy, looking at sunspots, tidal pulls of the moon, and positions of the planets.

There is only one person who knows their secret formula, the Farmers’ Almanac weather prognosticator who goes by the pseudonym of Caleb Weatherbee. Yes, it's a prognosticator. Like a groundhog. Not a degreed meteorologist.

But while we're in the heat of summer, I guess it's okay to have a little fun with it. Let's see what Floridians think of this "mixed bag of precipitation." Perhaps this means rain and sand, not rain, sleet and snow.

What winter May Actually Hold

If you talk to any sane degreed meteorologist and ask them what the winter may look like, the first thing they'll talk about is the El Niño Southern Oscillation (ENSO).

This is a fluctuation in ocean surface temperatures in the Pacific Ocean near the equator that can play an influence in atmospheric weather patterns.

Like all things that oscillate (think of a pendulum), there are two sides or phases and a neutral position.

In the positive phase of ENSO, called El Niño, those ocean waters are above average. This can help make for a more active southern storm track and jet and wetter winters in Georgia.

In ENSO neutral, the winter predictability is a little more difficult and we need to look at other weather patterns.

In a negative ENSO, called La Niña, the polar jet stream is more active and further north. This can keep most of the active storm tracks north of Georgia. It also means on average a warmer winter.

The Climate Prediction Center looks at model data to predict what phase of ENSO we may be in over the next year. They've already put out a 'La Niña Watch' for the fall, giving a greater than 50% chance of a La Niña developing.

They also give a 66% chance of La Niña conditions for November, December and January, the end of fall and start of winter.

Based on this outlook, a La Niña could mean a milder and drier winter for Georgia.

The El Niño Southern Oscillation is also used as a predictor for hurricane activity in the Atlantic.