Tornado threat mostly out of state 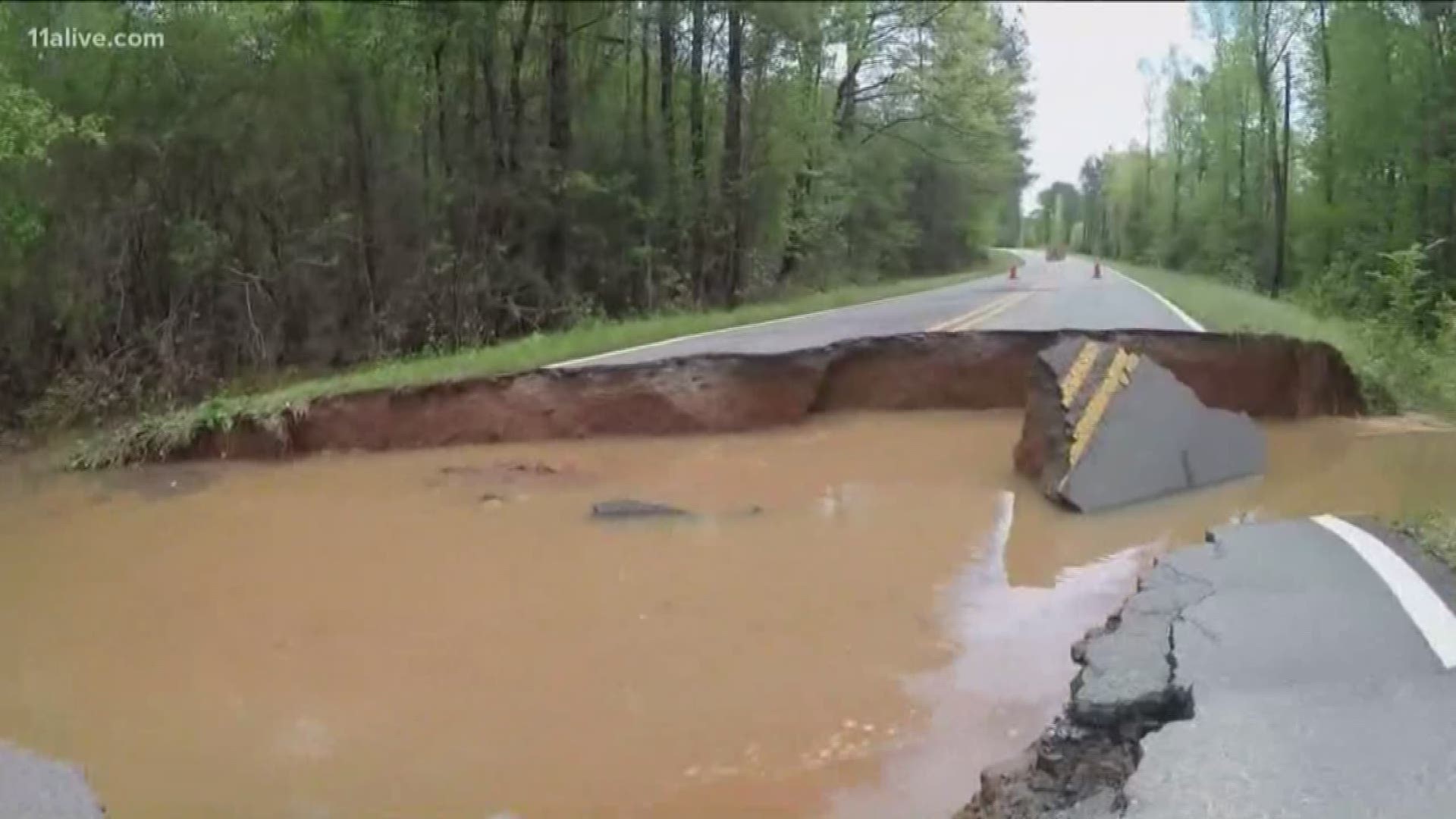 A line of strong storms brought severe weather, including damaging winds and possibly even tornadoes into the metro area Friday morning.

The 11Alive StormTrackers are keeping an eye on the storm and are updating this story with the latest as it passes over our area. Bookmark this page and check back often for the latest.

Sign up now for the free 11Alive News app to receive updates on this potential severe weather.

6 p.m. | The tornado watch remains in effect in Elbert and Hart counties until 8 p.m. Barring any further developments, this will be the last update to this story.

1:16 p.m. | Atlanta Fire reports that power lines have fallen on a delivery truck on Blackland Road. One person is trapped inside. They said they were awaiting Georgia Power crews at the scene. Wires were also reported down on a fire truck.

12:42 p.m. | Highway 441 in Banks Cross is being rerouted to Highway 59, according to the Banks County Sheriff's Office.

10:33 a.m. | A tornado watch has been issued for Elbert and Hart counties on the border of South Carolina until 5:00 p.m.

10:10 a.m. | More than 20 counties are under a flash flood warning until the afternoon. For the list, click here.

10:00 a.m. | A severe thunderstorm warning has been issued for Greenville, Henderson and Polk counties in far northeast Georgia until 10:15 a.m.

A severe thunderstorm warning has also been issued for Franklin, Hart, Oconee and Stephens counties until 10:30 a.m.

9:15 a.m. | A flash flood warning has been issued for Barrow, Banks, Clarke, Hall, Jackson and Madison counties until 1:30 p.m.

9:12 a.m. | Bill Taylor Road in Troup County is washed out. Barricades are in place.

Credit: Troup County Sheriff's Office
Bill Taylor Rd. has been washed out due to flood waters and is closed. Barricades are in place.

9:10 a.m. | Oconee, Barrow, Clarke, Walton and Jackson counties are under a new severe thunderstorm until 9:45 a.m. Hazards include winds up to 60 mph with flying debris.

9:05 a.m. | More than 22,000 customers are without power throughout the state. Georgia Power reports more than 10,000 customers affected in Fulton County alone.

9:00 a.m. | A tree fell on a building at the Columns at Peachtree Corners Apartment during severe weather on April 19, 2019.

8:38 a.m. | A severe thunderstorm warning has been issued for Morgan, Newton, Oconee, Walton, Anderson, Franklin and Stephens counties until 9:15 a.m.

8:27 a.m. | Banks County Schools are cancelled for Friday. They were initially delayed for two hours but have decided to close for the day.

Credit: Troup County Sheriff's Office
Wright Rd has washed out and is closed until further notice!

8:00 a.m. | More than 25,000 customers are without power throughout the state. Fulton County has the majority of the outages with Georgia Power reporting 11,946 customers without power.

At 7:55 a.m. a severe thunderstorm capable of producing a tornado was located over Nicholson, or near Commerce, moving northeast at 40 mph. Other locations impacted include Commerce, Nicholson, Ila and Pocataligo.

The National Weather service said "TAKE COVER NOW! Move to a basement or an interior room on the lowest floor of a sturdy building. Avoid windows. If you are outdoors, in a mobile home, or in a vehicle, move to the closest substantial shelter and protect yourself from flying debris.

Heavy rainfall may hide this tornado. Do not wait to see or hear the tornado. TAKE COVER NOW!"

7:45 a.m. | A severe thunderstorm warning has been issued for Banks, Madison and Jackson counties now that the tornado warning has expired.

The threat continues to be heavy winds associated with the storms. A tornado warning could still be issued at any time.

At 7:20 a.m., a severe thunderstorm capable of producing a tornado was located over Campton, or near Monroe, moving northeast at 40 to 45 mph.

7:15 a.m. | Rabun County Schools are delayed for 1 hr. because of severe weather.

7:13 a.m. | A flash flood warning has been issued for Spalding, Rockdale, Fayette, Pike, Henry, Cowetta and Clayton Counties until 12:45 p.m.

6:51 a.m. | A severe thunderstorm warning has been extended into Rockdale and Newton counties until 7:00 a.m.

6:39 a.m. | A severe thunderstorm warning has been issued for Henry, Newton and Rockdale counties.

6:27 a.m. | A severe thunderstorms warning has been issued for Habersham, Macon, Rabun and Stephens counties until 7:15 a.m.

6:07 a.m. | A flash flood warning has been issued for southeastern Troup County and western Harris County in west and central Georgia until 11:30 a.m.

Two to three inches of heavy rain from thunderstorms are dropping over the area. Flash Flooding is expected to begin as more rain ( up to 2 inches ) could fall this morning.

People in these counties should take cover immediately. Take your phone with you to keep updates.

"A flash flood warning means that flooding is imminent or occurring. If you are in the warned area move to higher ground immediately. Residents living along streams and creeks should take immediate precautions to protect life and property," according to the National Weather Service.

5:30 a.m. | Tornado warning no longer in effect for Fulton, Gwinnett and Forsyth County.

5:22 a.m.| Georgia Power says 21,153 customers are without power across the state. Thousands are in Fulton, Gwinnett, DeKalb, Haralson and Polk counties.

5:00 a.m. | Tornado warnings issued for Fulton County, Gwinnett County into southern parts of Forsyth County. This was just issued by the national weather service. This will last until 5:30 a.m.

4:47 a.m. | Georgia Power reports nearly 5,000 power outages and a majority are in Fulton County and Haralson County. People in Clayton, Floyd and Gwinnett are also experiencing outages as well.

4:30 a.m. | Wes Perry says drivers should take it slow this morning. The roads are very wet. He's seeing big puddles of rain and a considerable amount of lightening in downtown Atlanta.

3:39 a.m. | A big line of non-severe storms is coming through to make the roads very slippery for the morning commute.

3:00 a.m. | A tornado watch has been issued for several south metro Atlanta counties, including Meriwether, Pike, Troup and Upson until 9 a.m.

2:37 p.m. | Here are the new approximate arrival times for the next round of showers and storms. Nothing is severe at this time.

2:01 p.m. | A new line of storms is moving into the state, but it is producing more lightning with it.

12:57 p.m. | The first line of storms is weakening as it moves through the area. The 11Alive StormTrackers are still watching storms in Alabama that are still holding together. The Storm Prediction Center gives this area in central and south Alabama a 40 percent chance of another watch to be issued.

12:32 a.m. | More counties are being dropped from the Severe Thunderstorm Warning as the storm system continues weakening.

All the counties in our viewing area that remain are Butts, Lamar, Meriwether, Pike, Spalding, Troup and Upson counties.

These are the counties that remain.

11:18 p.m. | The line storms has slowed up a bit. Here are the new approximate arrival times.

10:55 p.m. | Chattooga, Dade, and Walker counties have been taken out of the severe thunderstorm watch.

10:50 p.m. | The Associated Press reports that severe weather that moved through Mississippi Thursday resulted in two deaths in the state. Forecasters believe multiple tornadoes hit southwest and central Mississippi, though the damage must still be surveyed.

9:46 p.m. | Here are some approximate arrival times for this line of storms.

9:00 p.m. | Storms in Alabama are racing toward west Georgia. Chris Holcomb is tracking them in a Facebook live.

READ: 4 things you can do now to prepare for severe weather