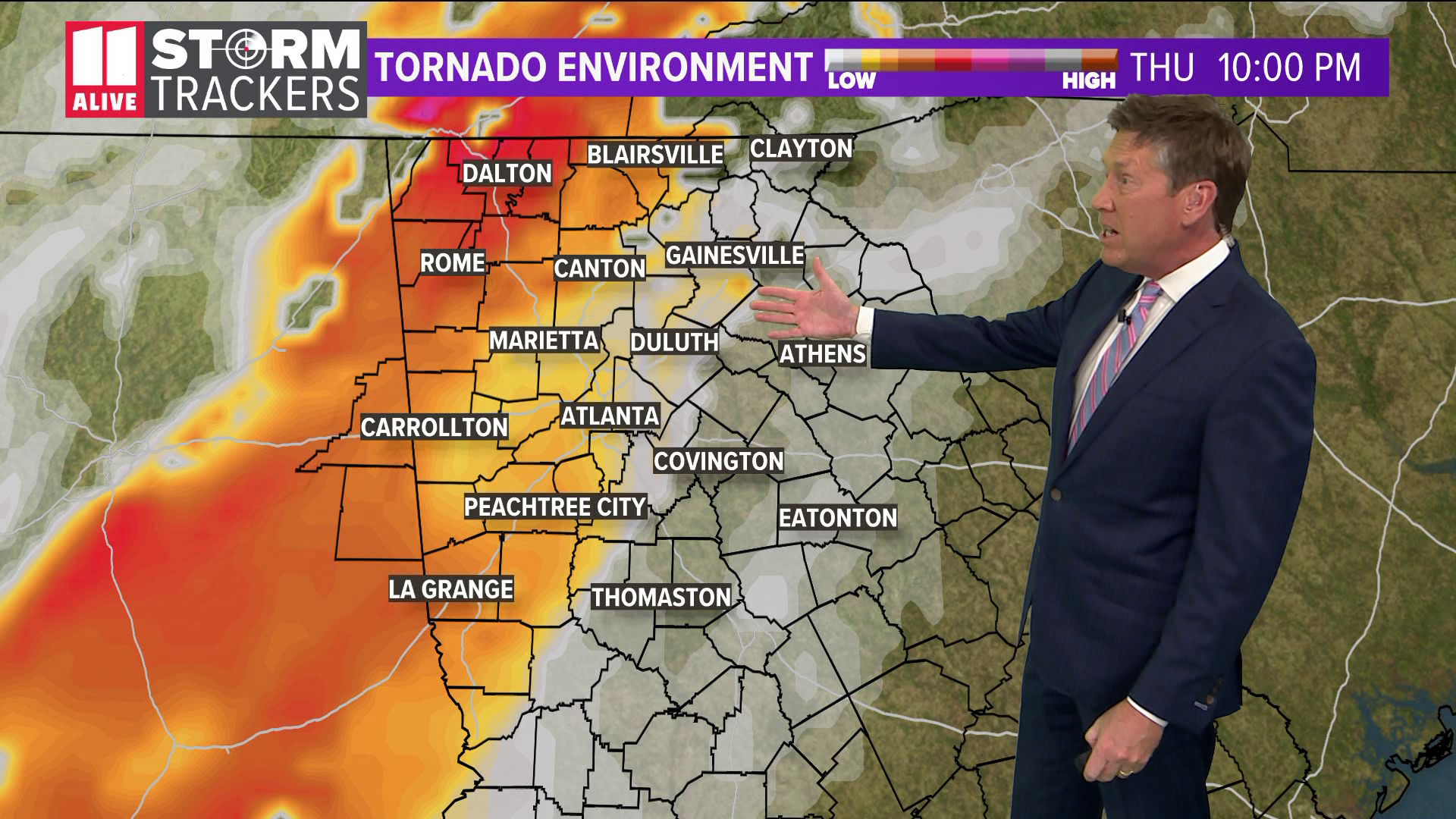 Spring Severe Weather Season is here, and we're tracking the potential for a round of strong to severe storms across north Georgia late Thursday.

There is a Tornado Watch for parts of the area in effect until 2 a.m.

* A significant severe weather outbreak will take place west of us in parts of the southeast, including Alabama, Mississippi, and Tennessee with several tornadoes, large hail, and damaging winds.
* For North Georgia, there is the potential for several storms to become strong to severe with damaging winds, tornadoes, and up to quarter-sized hail. Not every storm will be severe.
* Critical Timing for possible strong/severe storms: Now to Friday 2 a.m.

A significant severe weather event is underway across the southeast. Tornadoes caused serious damage to our west in Alabama, and some damage in Cedartown in Georgia from an earlier tornado as well.

In north Georgia, we'll continue to track the threat of damaging winds, tornadoes and flash flooding.

Currently, our Northwest counties (including Rome GA.) are under an enhanced risk (level 3 out of 5) as well as our northwestern metro areas. There is a slight risk for The Atlanta metro area (level 2 out of 5).

Here are our storm threats, highlighting our damaging wind and tornado threat as the primary players for Thursday evening. The tornado threat is greatest in northwestern Georgia, but isolated tornadoes are also possible in the Atlanta area. Damaging winds will be a bigger player for more people, as numerous storms could have strong winds. Heavy rains could lead to flash flooding of creeks, streams and roads with poor drainage, especially in northwestern Georgia. There is a Flash Flood Watch in far northern Georgia until Friday morning where the highest rain totals are likely.

Our critical timing for strong to severe storms will be Thursday 5 p.m. to Friday 2 a.m. Here's what our forecast track models look like.

Thursday Early Night - As we get later into the evening and into the early overnight, we'll track an increasing chance for strong to severe storms as storms enter the area from Alabama and south Tennessee. This will especially be the case in northwestern Georgia. This forecast track model shows strong to severe storms over parts of the metro at 10 p.m. Exact timing will change, but this shows the overall storm threat for this timing.

Late Thursday Night - Showers and storms continue working through with some strong to severe possible.

Early Friday morning - Showers and storms will continue to track eastward through our area. These storms will start strong to severe, but as they get further eastward the overall severe weather potential will decrease as we get further into the overnight. Still, some strong storms will be possible around the Atlanta metro into the very early morning hours of Friday.

The last of the showers exit at the start of the Friday morning during the commute.

The storms will be most highly concentrated and frequent in northwestern Georgia. These areas could locally pick up over 2 to 3 + inches of rain. This may cause small creek and streams to run high and some roads with poor drainage to have minor flooding. The flood threat is overall not as high in Atlanta area, but heavy rain could cause some minor street flooding on roads with poor drainage.

There is a Flash Flood Watch in far northern Georgia where the highest rain totals will be and the greatest flood risk.