Officer Ashley Still happens to be the certified trainer on automated external defibrillators for the GGC Police force. 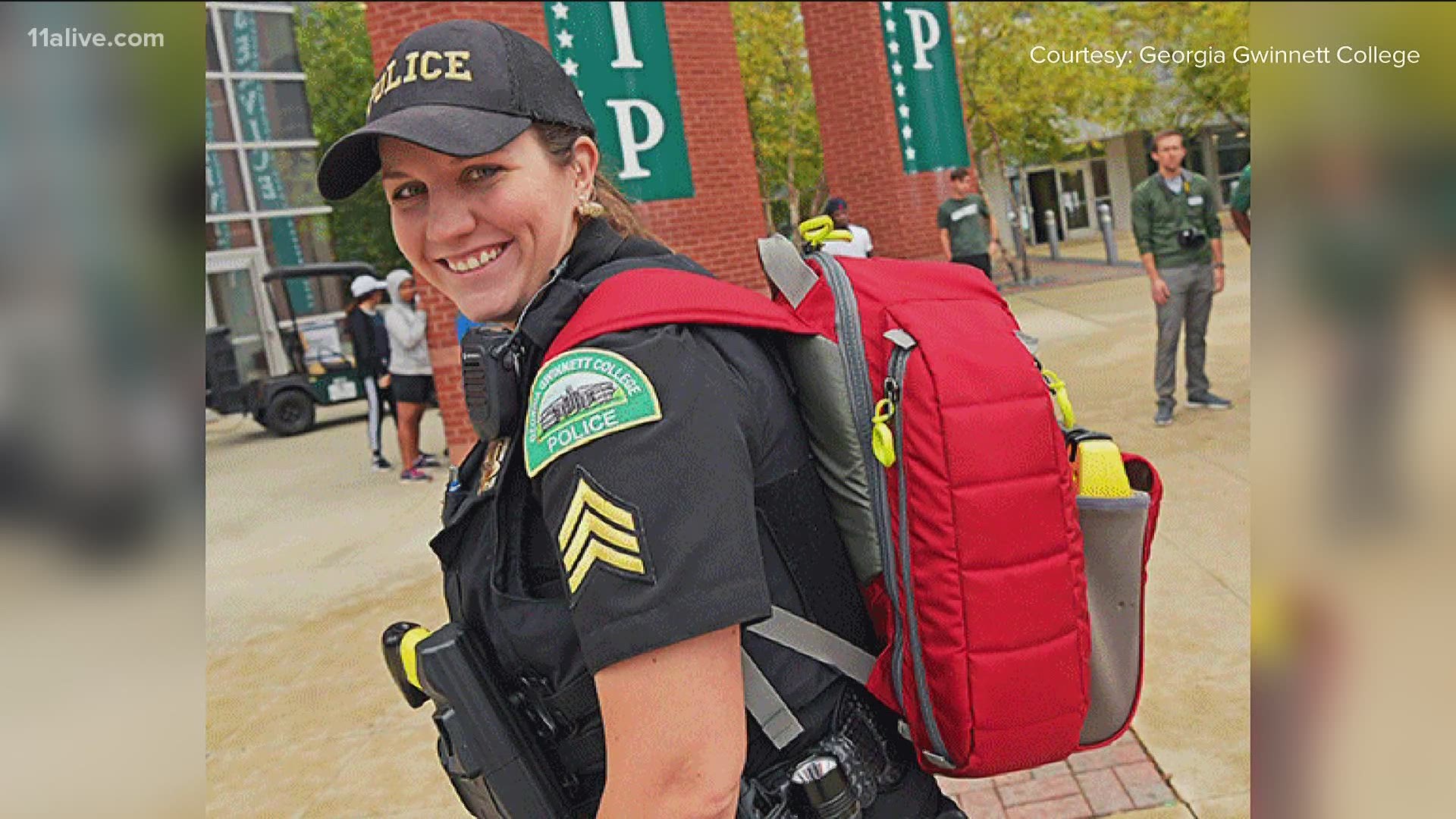 WINDER, Ga. — A college police officer has been hailed a hero after jumping into action to save a life.

Georgia Gwinnett College Police Officer Ashley Still was in the middle of a workout when an employee of the Winder-Barrow Brad Akins YMCA rushed over to her.

The employee knew she was a first-responder. So, she told Still that a woman had collapsed near the swimming pool and needed help.

“I immediately recognized it as full cardiac arrest,” according to Still in a release, describing what she observed, once she actually saw the woman. “She had no pulse and was displaying agonal gasps. I went to straight hands-on CPR, working with the team of people that were there.”

The employees from the YMCA who had started to help the woman had gone to grab the club's Automated External Defibrillator (AED). Still just happened to be the certified AED trainer for Georgia Gwinnett College, according to a release from the college.

“The purpose of an AED is to restore a normal cardiac rhythm,” Still said. “Normally in cardiac arrest the heart is kind of going nuts. The AED shocks the heart to restore the normal rhythm. Having that available really helps people.”

The college said that Still stepped in to lead the resuscitation effort, using CPR and one shock from the AED to get the woman's heart beating again.

“The training definitely just kicked in. So many times repetitively teaching about it – it just took over,” said Still.

She said that she just taught a basic life support class to other Georgia Gwinnett police officers a few days earlier.

“Everything worked exactly how it’s supposed to," she said.

Still has been an ongoing advocate for AED machines in general. She says she has pointed to experiences from her own life to help emphasize her educational efforts with other first responders. In addition, she is a strong advocate for getting more of the portable defibrillators in each building and patrol car on the Georgia Gwinnett campus.

After losing her own father to a heart attack, Still said she feels a measure of personal responsibility to help people on that front.

“Heart disease is the number one killer of people in the United States. My dad died from a cardiac-related event, so I get what loss is about,” said Still. “My sister passed in 2014 and my dad passed two years later. The knowing of loss is the driving factor for the medical stuff that I like to teach. I love anything preventative, so if I can prevent loss, or hurt, or sadness — whether it’s crime or health-related — that’s my ultimate goal.”

She said she wants to make certain that all of the Georgia Gwinnett Police officers are prepared to respond to any cardiac event that occurs on the campus. Still said that the event at the YMCA shows, however, that emergencies can happen anywhere.

“I try to tell our officers – we just never know what’s going to happen," she said. "We assume it’s going to happen on campus, but when you go to the gas station and a mom runs up to you with an infant that’s not breathing, they don’t care what the patch on your arm says. They just see somebody that can help.”