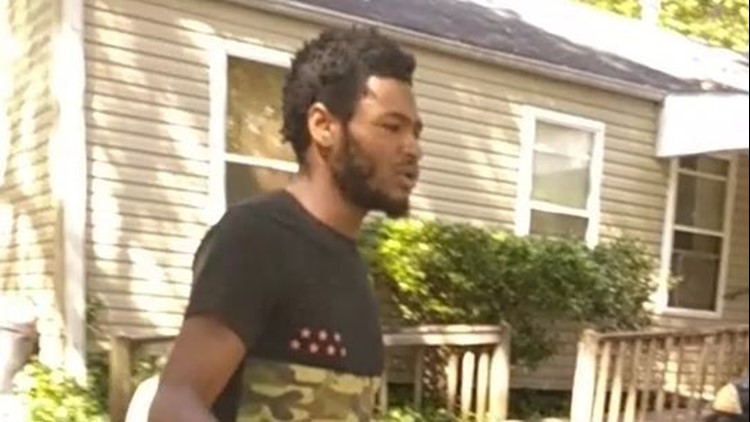 Photo by: Marietta Police Department
An image of suspect Terrence Foster taken from a police bodycam during a confrontation and arrest on Monday afternoon, Sept. 9, 2019.

MARIETTA, Ga. — Marietta Police have arrested and charged a male in connection with at least one car burglary in a neighborhood not far from the Marietta Square early Monday morning.

Shortly after midnight Monday, several residents in a neighborhood off of Heyward Circle called 911 to report what police called "suspicious activity," according to Marietta Police Officer Chuck McPhilamy.

McPhilamy said that when officers arrived, they began canvassing the area.

A short time later, one of the officers discovered a suspect matching a detailed description that the callers to 911 gave dispatchers. The officer confronted the suspect and attempted to detain him until back-up could arrive.

McPhilamy said a struggle ensued and the suspect escaped into the darkness. During the struggle, the suspect, who has since been identified as Terrance Lamar Foster, dropped a backpack containing evidence including loose change, multiple cellphones, assorted personal items and a set of keys.

According to McPhilamy, officers were able to link some of the items back to one of the 911 callers who had reported that their car had been entered without permission.

McPhilamy said that by 8 a.m., investigating officers were confident that they had identified the suspect and had issued a "Be On the Look Out" (BOLO) alert to uniformed patrol officers.

Foster was located and detained by an evening watch officer at 3:45 p.m. on Monday. After questioning, investigators charged with Foster two felony charges: obstruction and entering auto.

Criminals attempting to break the law in Marietta should expect to face a unified collaboration of amazing residents, 911 call takers, dispatchers, Police Officers and Detectives," said Marietta Police Chief Dan Flynn. "This is another shining example of community working together.”

McPhilamy said that the investigation is still ongoing, and as of now, it is not known if Foster entered other automobiles. Anyone with information related to the incident is asked to contact Marietta Police Detective Brian Bollinger at 770-794-5345.