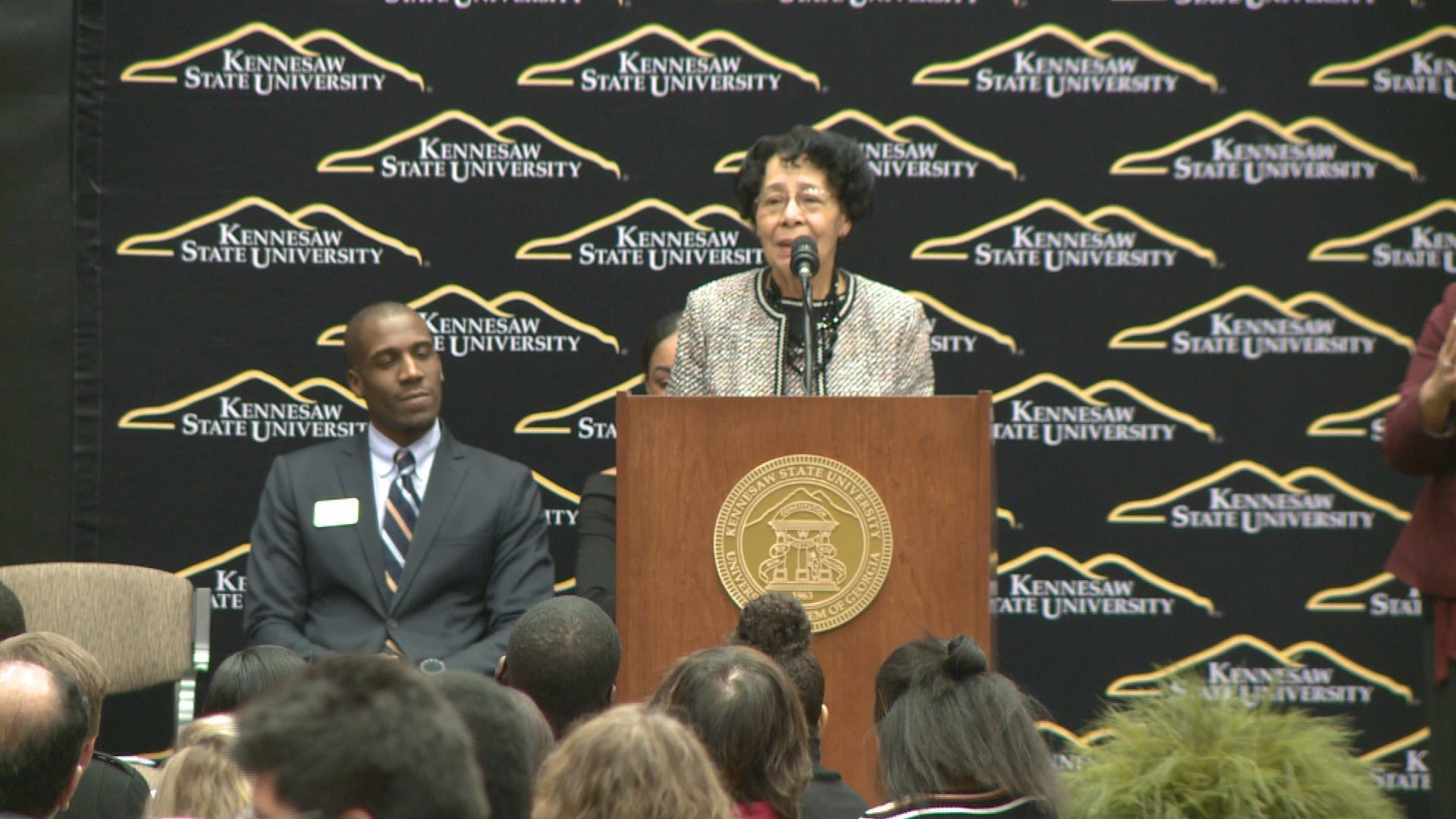 KENNESAW, Ga. — As keynote speaker at Kennesaw State University’s graduation ceremony, Mary Frances Early challenged the graduates to close their eyes and imagine what it was like to be an African American student in the Jim Crow era.

“What if you had to go to a black segregated school that had no library, no playground, no lunchroom, and the books were all from white schools that were used, with pages torn out and scribbled on,” Early described. “What if you were denied entrance to restaurants, movies, concerts … even department stores. You couldn’t try on clothing. You had to just buy it and hope it fits. How would you feel? This is the world in which my childhood was born.”

Early “unabashedly” said Dr. Martin Luther King Jr. is her hero, and his message of equality and freedom played a pivotal role in her life as a student in the sixties.

She had graduated from Turner High School, an all-black high school in Atlanta, and was teaching music and studying at the University of Michigan when everything changed – when she turned on the television and watched the University of Georgia Desegregation Riot of 1961, when two black students arrived to the all-white school and were greeted by a mob of people.

“I wanted to do something, but I couldn’t because I was hired by the state, so I would have been fired,” Early recalled. “But then, I realized what I could do. I could transfer from the University of Michigan and apply to UGA. My mom said, ‘it’s dangerous, you’re crazy.’ But, I said it was something I had to do. And she agreed to support me.”

Early said it wasn’t easy getting into UGA, even though she was top of her class. She was investigated extensively before she was allowed to go to school; she had to appear before a Fulton County judge to get a stamp of approval that said she was a “model citizen.”

“They wanted to know if I had any venereal diseases, if I ever shoplifted. They investigated my whole family,” Early said. “Even my father, who was dead.”

After about five months of paperwork, Early stepped into her first UGA classroom -- advanced history. And she had less than a warm welcome.

“I looked around at all the cold faces. People moved away from me,” she said. “I wanted to burst out singing, ‘we are friends.’ But I didn’t.”

Early became the first African-American woman to graduate from UGA in 1962.

“I knew it was a momentous moment. For 175 years, Georgia was all white,” Early said. “And now, they had a black woman who finished. And after me, many others would come.”

After retiring from music, Early continued to help support integration at UGA and would later become the first African-American elected president of the Georgia Music Educators Association. She went on to teach music at Morehouse and Spelman colleges, and served as the chair of the music department at Clark Atlanta University. She also received the UGA President’s Medal for supporting the school as it became a safer place for students of color.

While she’s been celebrated with awards and accolades throughout her life, Early said her most prized possession was a letter she received from Dr. King. She knew him because she would go to his church and listen to his sermons in Atlanta.

“He said, in his letter: ‘You have brought Atlanta closer to the American dream',” Early said.

She challenged the 2019 graduates of Kennesaw State University to “take on the mantle” of Dr. King’s legacy and dream “the impossible dream.”

“You are our hope for the world,” she said.