Across the state, law enforcement officials are doing their part to try and stop the spread of the COVID-19 coronavirus among inmates housed there. 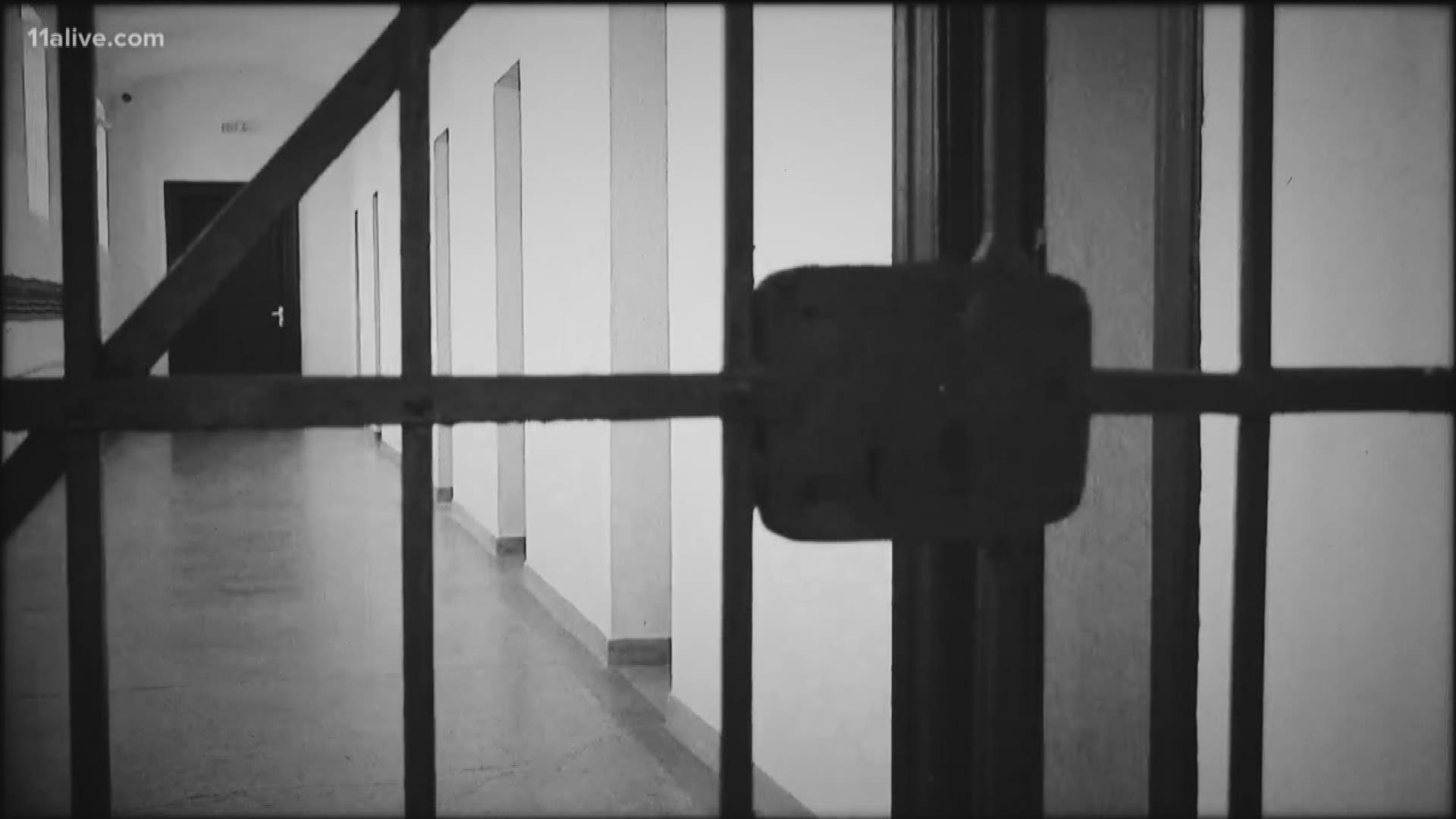 ATLANTA — Amid the global coronavirus pandemic, health officials have emphasized social distancing as the public's main way to help stop the spread of COVID-19.

Schools have closed - many until the end of the semester - restaurants have closed their dining rooms, businesses have limited their stores to customers and offices have adopted work-from-home policies.

Among the incarcerated population, however, those guidelines aren't as easy to follow, as facilities are often at capacity.

Across the state, law enforcement officials are doing their part to try and stop the spread of the COVID-19 among inmates housed there.

RELATED: How law enforcement continues their work, while social distancing

Already, Georgia has seen several instances of coronavirus among incarcerated people. According to the Georgia Department of Corrections, there are currently 11 staff members who have been diagnosed with COVID-19 and another 11 offenders have tested positive for the virus at its 11 facilities across the state.

One offender in custody at the Lee State Prison has died from the coronavirus, the GDC reported. In that facility alone, there were five infected staff members and seven infected offenders, the GDC said.

In Fulton County, a spokesperson for the sheriff's office said that there have been 13 inmates who have tested positive for the coronavirus, including nine since Sunday.

At least one inmate incarcerated in the DeKalb County Jail is also being treated at Grady Hospital, the sheriff's office said.

In a statement, the American Civil Liberties Union warned that it was crucial that state and local officials implement procedures to protect all people from being exposed - including those in custody at prisons and jails across the country, especially for low-level offenses.

Here's a look at some of the measures state and local facilities are taking:

If an offender exhibits symptoms indicative of COVID-19, the GDC will immediately engage with the DPH and the offender will be placed in medical isolation, pending DPH testing.

If a staff member presents with any symptoms of illness, they will be instructed not to report to work and contact their health care provider. These staff will not be permitted to return to work until they have been cleared by a medical professional, or as indicated by DPH quarantine protocols.

Additionally, the GDC said all offenders in custody will continue to receive all necessary treatments and services during the pandemic.

Those services include access to showers, all medical and mental health treatment, alternative educational programs, substance abuse programs, access to the phone and kiosks, cleaning supplies and hand soap, the law library and the commissary.

For a full outline, check the Georgia Department of Corrections website.

In addition to what the state prisons are doing, the Georgia Board of Pardons and Paroles said it may release some prisoners sooner than they expected amid the coronavirus outbreak and the state’s efforts to combat the virus. The Board said it has begun reviewing specific cases for clemency release.

The Board will be considering for a clemency release individuals currently serving for a non-violent offense(s) who are within 180 days of completing their prison sentence. The majority of these individuals will be released to community supervision.

A spokesperson for the Fulton County Sheriff's Office said medical providers and jail staff are always vigilant to prevent the spread of germs/viruses, and all inmates undergo medical screenings before being committed to the Fulton County Jail system.

However, in light of the pandemic, the sheriff's office said medical personnel are on alert for persons with temperatures above 101 degrees, those with persistent coughs, and other symptoms of the COVID-19. Enhanced screenings are also taking place at the jail checkpoints, the sheriff's office said. In compliance with standard protocols to prevent the spread of COVID-19, individuals will be denied entry into jail facilities if they answer yes to any of the following questions concerning:

The sheriff's office said additional cleaning protocols are ongoing to disinfect surfaces, and more handwashing stations and hand sanitizer dispensers are being installed.

All visitation is suspended until further notice at the Fulton County Jail, Alpharetta Annex, Marietta [Street] Annex, and South Fulton Annex (in Union City). The only exception to this directive will be for attorney visits, judges, clergy, medical/mental health providers and other law enforcement agencies. Online video visitation is still available at www.fultonsheriff.net via communications vendor Securus.

In an update, the sheriff's office added that the operations of the North Fulton Alpharetta Jail are being suspended for the next two months beginning Sunday, April 5 at 12:00 p.m. This suspension will continue until further notice pending the status of the COVID-19 crisis.

Lastly, a spokesperson for the sheriff's office confirmed that more than two dozen people were released from the jail system. All those cases were reevaluated to determine whether the defendants should be released early in order to help prevent overcrowding in light of the pandemic.

In addition to the actions the jail is taking, the office for District Attorney Paul Howard said he has asked law enforcement to issue only citations for non-violent offenders instead of arresting them. The goal, Howard said, is to try and maintain a limit on the jail population while courts are closed ad trials are suspended.

RELATED: Fulton DA asks for citations for non-violent offenders instead of arrests during coronavirus court closures

In his letter to law enforcement, Howard outlined which offenses that should be eligible for citations instead of arrests, including:

DeKalb County Sheriff Melody Maddox said the jail is well-prepared in the event of the spread of coronavirus in the county.

Maddox emphasized that the jail already has six isolation cells in place -- four for male inmates and two for females. Any individuals requiring a high-level quarantine status would be transported to Grady Memorial Hospital in downtown Atlanta or other designated facilities as needed.

Sheriff Maddox outlined some of more recent precautions that are taking place to minimize inmates’ and staff’s risk of exposure to the virus at the 3,800-bed adult detention center.

The Cobb County Sheriff’s Office said it has been working closely with the Judicial Court Complex staff, Cobb-Douglas Public Health board, the WellStar Health System, surrounding law enforcement agencies, various state agencies including the Dept. of Public Health and others for guidance.

"Our focus continues to be on the health and safety of the citizens of Cobb, our employees, and their families as well as those in our custody," the sheriff's office said.

The sheriff's office said they have placed emphasis on the screening process of those brought to the facility with a more in-depth questioning of past travels and health concerns both now and previous to their incarceration.

In addition, the jail is modifying the visitation process so as to minimize the possibility of passing the virus.

We are also assessing access to public lobbies and face to face access.  We have set-up video conferencing for those court hearings taking place at the jail to further reduce contact and create the recommended “social distancing” in all areas whenever possible. When needed a temporary housing unit has been created for Sheriff’s Office staffing to reduce the possible transition of the virus between home and work.

Finally, the Cobb Sheriff’s Office is working closely with Judicial Staffing and other Law Enforcement Agencies regarding the processing of warrants and orders from the court, to include evictions, restraining orders and other orders in areas that might increase person-to-person contact. The Sheriff’s Office is also actively working with IS in exploring the options available to us for those with duties appropriate to work from home."

For a full outline, check the Cobb County government website.

The Paulding County Sheriff’s Office and Jail is closed to the public until further notice.

Jail will function as normal, to include the intake and bonding processes. Although the sheriff's office will cease any on-site inmate video visitation, it said it will be offering one free off site video visitation per week for each inmate.

For more information go to the online visitation website at https://www.gettingout.com/.

The Forsyth County Sheriff's Office described Monday what the steps they are taking to "keep our FCSO Jail Staff, our inmates, and the public safe we have implemented the following procedures to keep the Detention Center virus-free."

RELATED: Here's how the Forsyth Co. Sheriff's Office is handling COVID-19 in the jail

The department then listed the following procedures: