Dixie was lying between the driver and passenger seats. She suffered third degree burns. The RV company claims there isn't a problem with the vehicle. 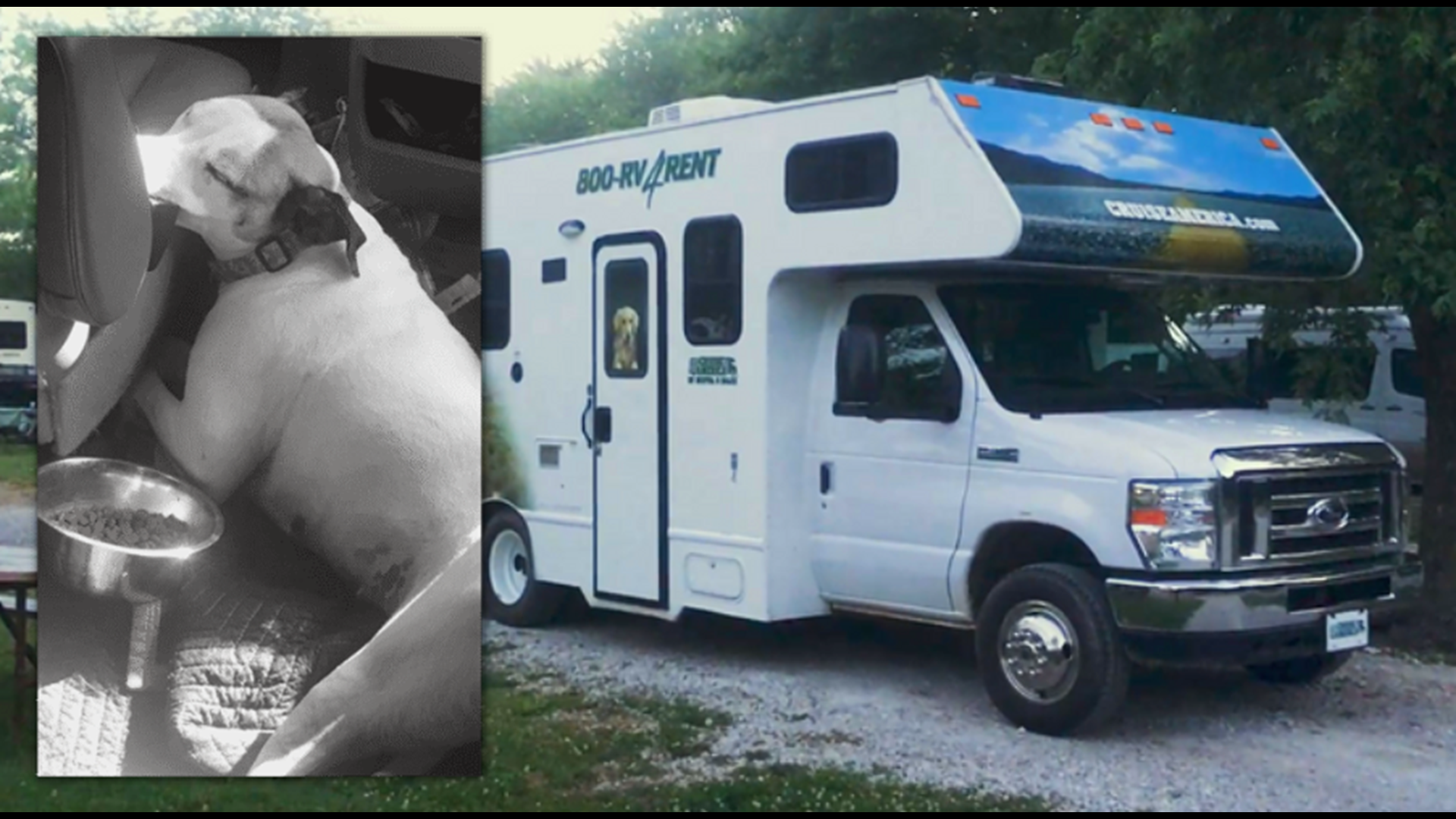 ATLANTA — Dixie isn’t a cat, but her foster parents believe she has nine lives. Well, seven left after this summer.

"She's a wonderful, spirited happy pup who is enjoying life in every way,” Paula Rothman said. She rescued the pit mix pup in 2019.

Rothman nursed Dixie back to health after someone shot the dog twice about two years ago. Dixie is now partially paralyzed, but still has a lot of spunk.

This past June, Rothman rented a 2018 Ford RV from Cruise America to drive Dixie across country and drop her off at a sanctuary in Washington state that specifically cares for disabled dogs.

According to Rothman, Dixie laid down on the floor in between the driver and passenger seats. Just hours into the trip, something went wrong. When Rothman went to pick up magazines next to Dixie, she could feel the RV’s floor hot to the touch. Too hot.

"The floor was so hot. It was burning hot,” Rothman said. “We immediately knew something was wrong. We had no idea that the burns would be third degree and the skin would blister...she almost died.”

RELATED: Paralyzed pup Dixie defies the odds to learn how to walk again

Pictures taken of Dixie shortly after the incident show severe burns to one of the dog’s legs, with the skin nearly melted off.

Rothman believes a missing or malfunctioning heat shield, typically installed to protect passengers from heat created by the engine, caused the problem.

Cruise America declined to be interviewed, but a company vice president told 11Alive's investigative team, The Reveal, he believes nothing was wrong with the vehicle. The company's insurance has offered to pay for Dixie’s medical bills, which according to Rothman were around $5,000.

The company pulled the vehicle of out of service for inspection, but that didn’t happen until about a month later, after they were contacted by The Reveal.

Jason Levine said it should have happened sooner. He’s executive director of the Center for Auto Safety, a consumer advocacy group.

“The people responsible for the vehicle were put on notice that that’s what’s happening, and yet, they’re just putting it back in the stream of commerce? It’s immoral, really," Levine explained.

Cruise America said it’s still investigating the incident and has no further comment about the vehicle.

Levine said that doesn’t mean Rothman’s problem was an anomaly.

“The fact that there is currently not a recall on something where you’re having a problem does not indicate that this is anomalous, this is a freak incident. In fact most of the time, the things we deal with at the Center for Auto Safety, people think are freak accidents, and they turn out unfortunately to be predicable and preventable problems,” Levine said.

In a response from Ford Motor Company, a spokesperson said the following: "After a thorough review, we have found no investigations involving 2018 E350 Super Duty related to missing or malfunctioning heat shields/cabin floor and seat mount thermal mounts."

Rothman wants Cruise America to put a warning label inside its RVs. The company says, that’s not happening.

“Take responsibility for it. You maintain the vehicles. You service them before they go out on the road. It’s not a new vehicle. You should have known this,” Rothman said.

If something similar happens to you, the Center for Auto Safety suggested writing down the vehicle identification number before leaving the lot. It allows consumers to check for recalls ahead of time.

Levine also suggested asking rental companies how often its vehicles are serviced to make sure it’s been inspected before you hit the road.

Homeless. Jail. Sexually exploited. The Game of Life never talked about this.

Prices of Uber/Lyft have gone up, but the drivers aren't seeing much of the money