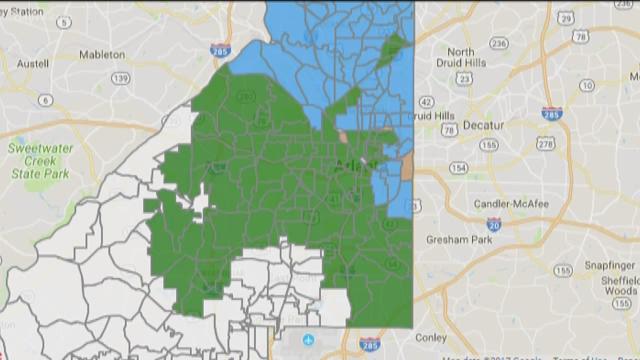 ATLANTA — Tuesday’s election map shows that the vote between Mary Norwood and Keisha Lance Bottoms broke along racial lines that have become very familiar over the decades.

Keisha Lance Bottoms voted at southwest Atlanta’s Fickett Elementary, and her neighbors were overwhelmingly loyal to the Atlanta city councilwoman – giving her more than 80 percent of their votes.

Mary Norwood voted in Buckhead, at Peachtree Presbyterian Church. Her neighbors helped carry that precinct with more than ninety percent of the vote.

And geographically, that kind of loyalty spread throughout the city. The Fulton County precinct map shows Norwood largely carried precincts north of a line extending from East Atlanta Village, north west toward Marietta Boulevard and beyond.

"It's a conversation about race," Hobson said. "You cant avoid it in a city such as Atlanta. We’re in a claret red state. The national political tenor of the United States right now is steeped in race."

The maps shifted after the November 7th election, but not much. In that election, Cathy Woolard took many of the precincts in the city’s eastern neighborhoods, while Norwood won the North and Bottoms won the south. The runoff map shows Norwood won many of Woolard’s precincts – but not enough to offset the strength Bottoms showed in southside precincts after other African American candidates washed out of the campaign.

Two precincts tied; one in the Reynoldstown community and another that includes Ponce City Market.