Who is Randal Davidson, the Dalton teacher arrested for shooting a gun in school?

Dalton City Police identified a 53-year-old social studies teacher who allegedly barricaded himself inside of a classroom, not allowing students to enter. 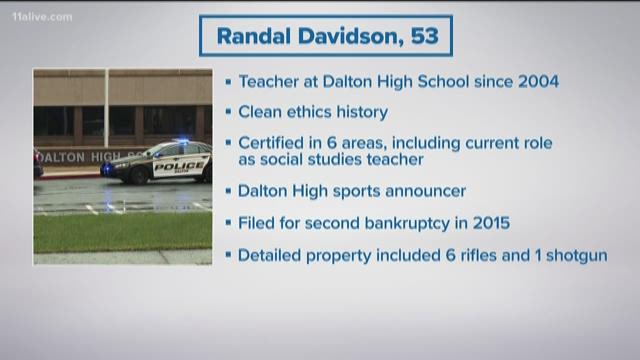 DALTON, Ga. - A teacher is in custody after a shot was fired inside of a classroom at Dalton High School Wednesday morning.

Dalton City Police identified 53-year-old Randal Davidson as the teacher who allegedly barricaded himself inside of a classroom, not allowing students to enter. When the principal came to attempt to unlock the door, that's when a shot was fired.

Davidson has been a social studies teacher at Dalton High School since the fall of 2004. Davidson had a clean ‘ethics’ history and was certified in history, political science, economics, geography, behavioral science and gifted in-field, according to the Chief Information Officer with the Georgia Professional Standards Commission

At one time he worked for a local radio station and was the announcer for the high school’s football team.

The couple filed their second bankruptcy in 2015 in Tennessee. The filing detailed his property including ownership of six rifles and a shotgun.

Davidson has no other criminal record or court filings.

Authorities have charged him with aggravated assault with a gun, terroristic threats and acts, carrying a weapon in a school safety zone - non-license, reckless conduct, disrupting a public school and possessing a firearm during the commission of a felony. He will make a first appearance Thursday at 2 p.m.