Trump tweeted that NASCAR's only Black driver needs to apologize after an FBI investigation determined a noose found in his stall had been there for months. 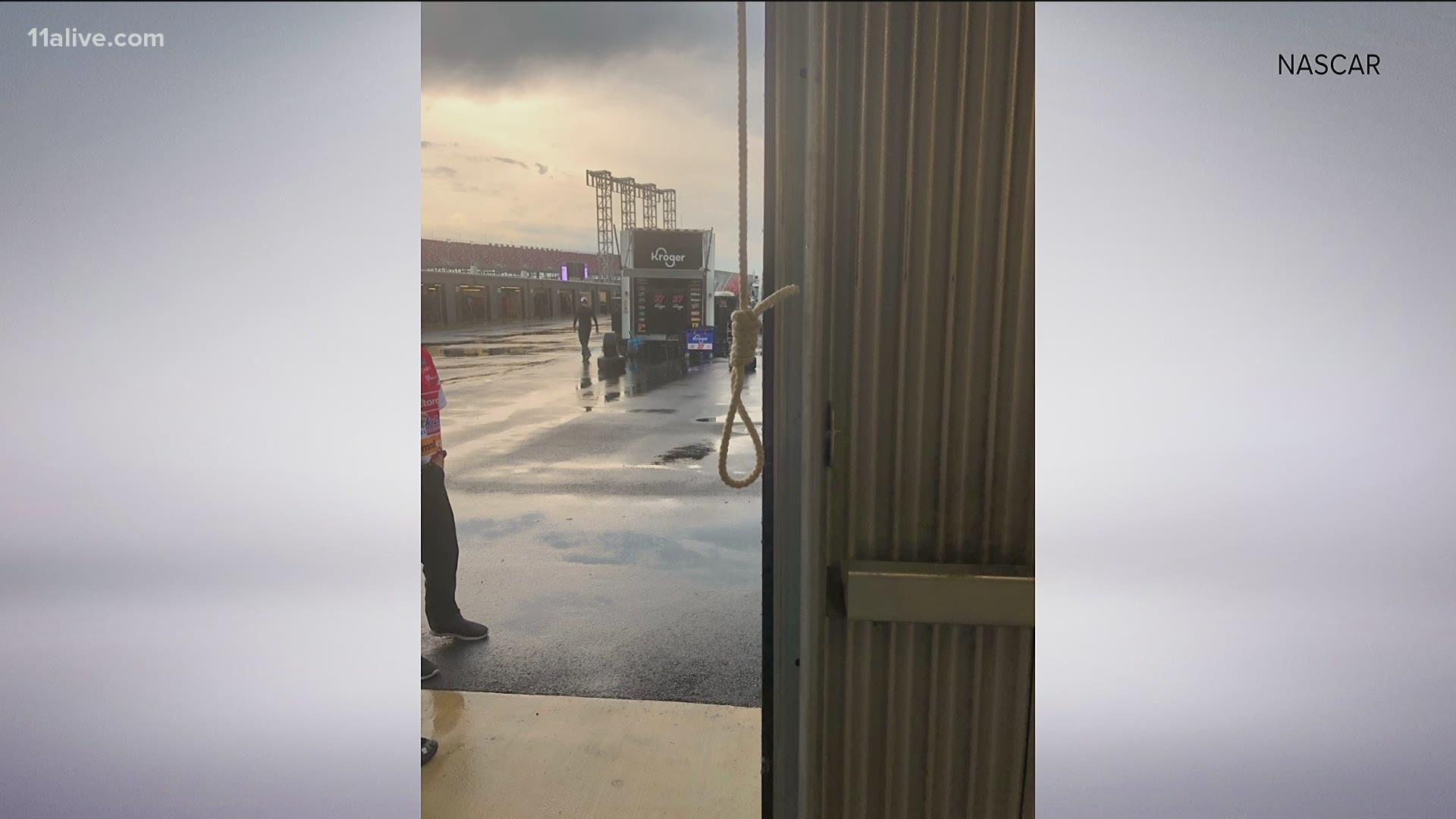 WASHINGTON — NASCAR’s layered relationship with President Donald Trump took a sharp turn Monday when Trump blasted the series for banning the Confederate flag and wrongly accused the sport’s only full-time Black driver of perpetrating “a hoax” when a crew member found a noose in the team garage stall.

Trump suggested Bubba Wallace should apologize after the sport rallied around him after the noose was found in his assigned stall at Talladega Superspeedway in Alabama. Federal authorities ruled last month the noose had been hanging since October and was not a hate crime. NASCAR and the FBI have exclusively referred to the rope – which was used to pull the garage door closed – as a noose.

It was the only garage pull out of 1,684 stalls at 29 inspected NASCAR tracks to be fashioned as a noose.

NASCAR President Steve Phelps has bristled at suggestions the noose was a hoax. Wallace was shown a photograph of the noose, never personally saw it, and was told by NASCAR officials he was the victim of a hate crime.

“Has @BubbaWallace apologized to all of those great NASCAR drivers & officials who came to his aid, stood by his side, & were willing to sacrifice everything for him, only to find out that the whole thing was just another HOAX?” Trump tweeted. “That & Flag decision has caused lowest ratings EVER!”

The tweet came after Trump used a pair of Independence Day speeches to dig deeper into America’s divisions by accusing protesters who have pushed for racial justice of engaging in a “merciless campaign to wipe out our history.” The remarks served as a direct appeal to the Republican president’s political base, including many disaffected white voters, with less than four months to go before Election Day.

Wallace responded on Twitter with a note to “the next generation and little ones following my foot steps” in which he urged people to use their platform and not be detracted by “hate being thrown at you.”

“Love should come naturally as people are TAUGHT to hate,” Wallace tweeted. “Even when it’s HATE from the POTUS .. Love wins.”

White House press secretary Kayleigh McEnany defended the president’s decision to wade into the Wallace case, saying in an interview on Fox News that, “The president’s merely pointing out that we’ve got to let facts come out before we jump to judgment.” She also linked the incident to a rush to judgment, likening it to actor Jussie Smollett’s claims he was a victim of a hate crime.

During a White House briefing later Monday, McEnany continued to criticize the press, calling Trump’s tweet a “complete indictment of the media’s rush to judgement.”

McEnany declined to explain why the president thought Wallace should have to apologize given he didn't report the noose. McEnany refused to say whether or not the president supports NASCAR’s ban on the Confederate flag.

NASCAR did not immediately respond to a request for comment.

Andrew Murstein, co-owner of the Richard Petty Motorsports team that fields Wallace’s car, called Trump’s tweet “a late, misinformed, and factually incorrect statement.” He also said it was unwarranted and cited the photo NASCAR released of the noose.

“A picture is worth a thousand words,” Murstein said in a statement. “Bubba has reacted in a truthful, professional, level headed manner. The NASCAR community and those in the know all stand by him.”

Wallace, the only Black driver in the top series , led the push for NASCAR to ban Confederate symbols at tracks. Two weeks later, the noose was found at the first race some fans were allowed to attend since the shutdown. On the same day, a plane pulling a banner of the Confederate flag that read “Defund NASCAR” was circling the track and protesters outside the speedway displayed their flags.

Two NASCAR drivers came to Wallace’s defense Monday on social media. Seven-time NASCAR champion Jimmie Johnson, currently sidelined with the coronavirus, posted an image of Wallace’s No. 43 that had been used by drivers in an earlier #IStandWithBubba campaign. Tyler Reddick, a rookie who drives for Richard Childress, tweeted but later deleted a reply to Trump that read: “We don’t need an apology. We did what was right and we will do just fine without your support.”

NASCAR’s complex relationship with Trump dates to early in his first campaign when former chairman Brian France brought a contingent of drivers to a rally in Georgia.

France later sent a memo to NASCAR employees stating his political beliefs were his own and he was not speaking on behalf of the organization. France was replaced as chairman following his arrest for driving while impaired in 2018 and no longer has a role with his family business.

Other members of the France family welcomed Trump to Daytona for the season-opening race in February. Many drivers and owners mingled with Trump in a staging area and posted selfies with the president.

Wallace, who was born in Alabama, has taken an active role in the push for racial equality. He has worn a shirt saying “I Can’t Breathe,” and raced with a Black Lives Matter paint scheme in Virginia.

The series first tried to ban the Confederate flag five years ago, but did nothing to enforce the order.

Ramsey Poston, a former NASCAR consultant and now head of crisis management firm Tuckahoe Stategies, said Trump’s tweet is harmful to NASCAR’s push for inclusion and diversity. Wallace is one of just a handful of non-white drivers. Daniel Suarez is Mexican and Aric Almirola is of Cuban descent. Kyle Larson, who is half-Asian, was fired in April for using a racial slur and is not currently competing in NASCAR.

“The brewing cultural war within NASCAR for equality has just erupted and the sport’s efforts to separate from its past just got tougher,” Poston said. “The president’s comments are essentially a rallying call for people who support the Confederate flag to challenge the sport’s recent flag ban and create chaos.”

While Trump claimed NASCAR’s ratings are down, they are actually up. Michael Mulvihill, executive vice president at Fox Sports, tweeted right after Trump that Fox viewership is up 8% since the sport returned from the pandemic hiatus on May 17. NBC took over the broadcast rights this past weekend and said its ratings for the Xfinity Series race on Saturday had increased. 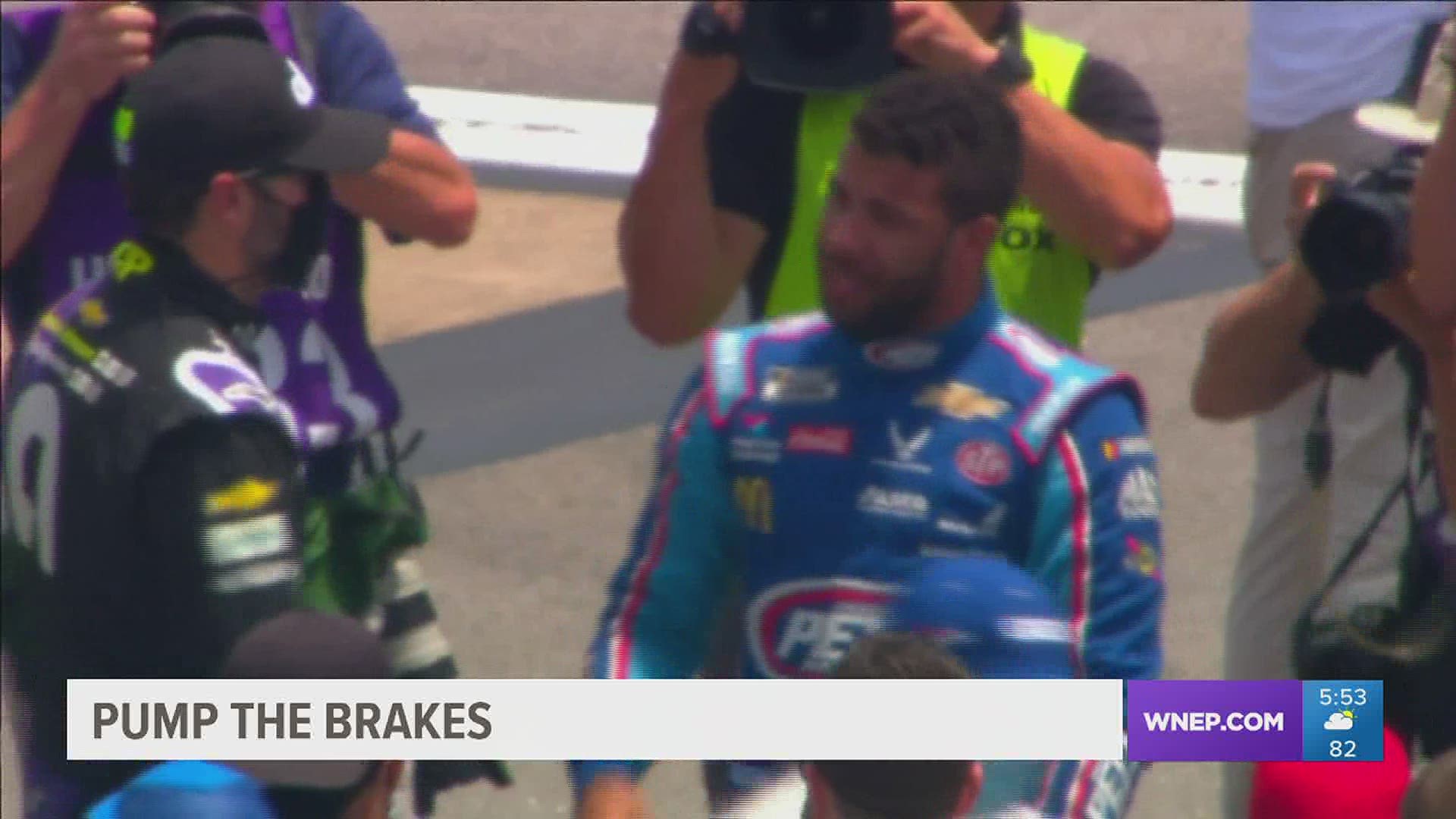