The damage to Waverunner’s left front flipper was serious; it had to be amputated. The care team spent 80 days helping the turtle with wound care and rehabilitation. 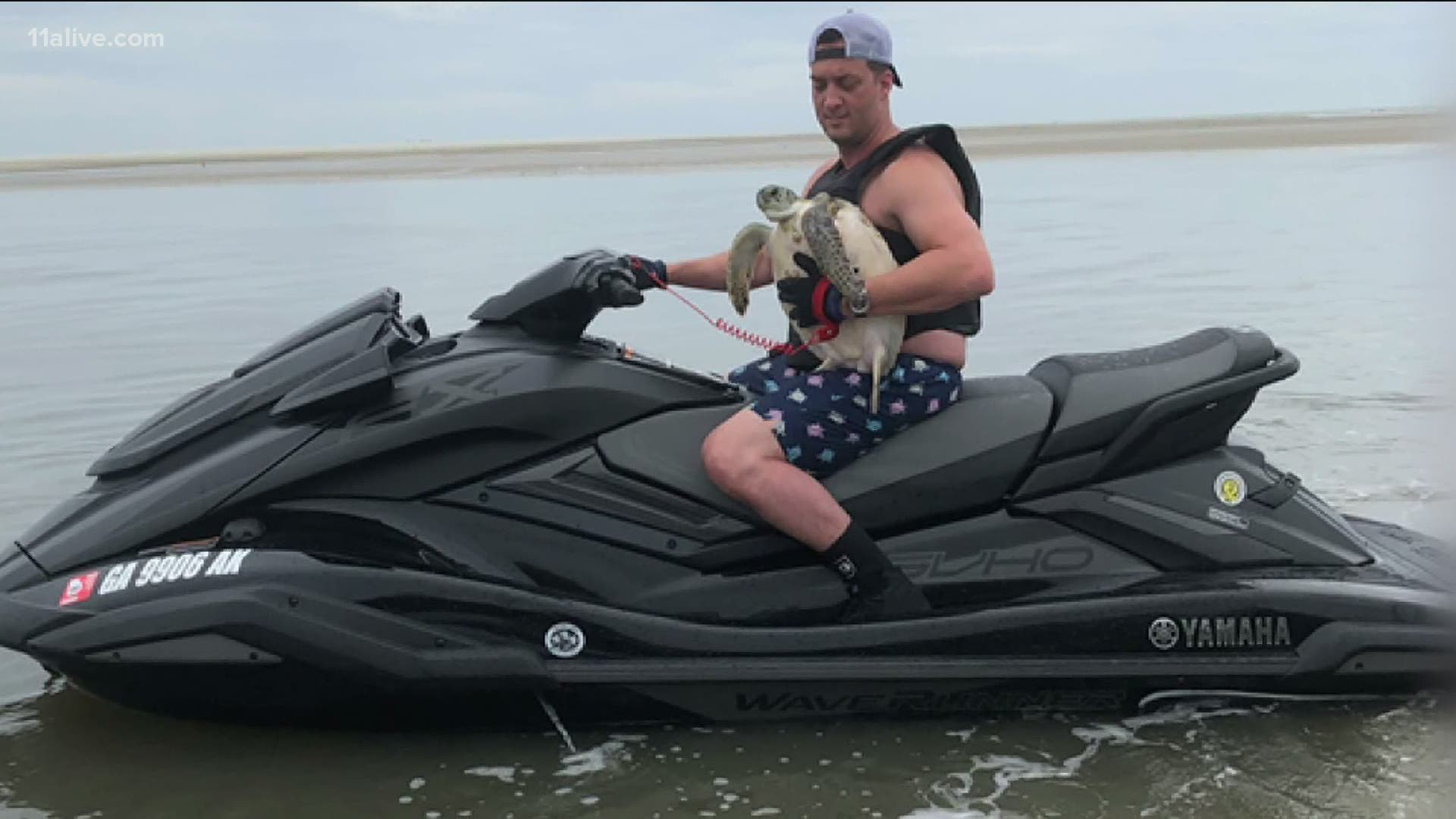 JEKYLL ISLAND, Ga. — There would be no release back to the open water without a dramatic rescue.

Martino Ruggiero, of Brookhaven, was on vacation on Jekyll Island, enjoying one of his favorite places. That's when he made the discovery of a sea turtle in need.

“The turtle probably wouldn’t have survived,” Ruggiero said. It felt like a one-in-a-million kind of moment.

“It is pretty amazing how the timing of it all lined up," he said.

He was doing one of his favorite things – riding a wave runner.

“My dream job would be to be a wave-riding sea turtle rescuer," he laughed. “Too bad you can’t pay the bills with that."

It may not be his official job, but that is exactly what happened. He got an experience you cannot put a price on when he saw a young green sea turtle in trouble.

“We could see he had big gashes on his shell and on his neck," he described.

"They were boat strike injuries, from the propeller of a boat,” Ruggiero explained. “When I picked him up, my brother noticed that the turtle could not use it’s left flipper.”

Knowing the turtles are a protected species, he called the Department of Natural Resources for guidance.

“He asked me if I could get it back to Jekyll Island,” Ruggiero recalled. “I was able to hold the turtle in one arm and drive it back.”

DNR had called ahead to the Georgia Sea Turtle Center. They met him at the boat ramp. Ruggiero got to help name the turtle. Waverunner seemed appropriate.

“It’s not often a turtle gets to ride on a wave runner," he said.

The Georgia Sea Turtle Center on Jekyll Island would care for Waverunner. It is a place Ruggiero and his wife have supported for years.

“We are wildlife enthusiasts and we’ve always loved the work they do," he said.

They went to visit the turtle the next day. The damage to Waverunner’s left front flipper was serious; it had to be amputated. The care team spent 80 days helping the turtle with wound care and rehabilitation.

“I wondered if he’d be able to ever be released back to the ocean with a missing flipper,” Ruggiero said.

But in the end, Waverunner learned how to swim and dive just like he did before his injury. He was strong enough to return to the ocean.

On release day, Waverunner made a triumphant return to the open water, thanks to one-in-a-million kind of moment.

“We could ride wave runners around Jekyll Island for the next 20 years and never encounter another sea turtle like that again,” Ruggiero said. “To have this happen was pretty cool.”

The Georgia Sea Turtle Center has treated nearly 1,000 sea turtle patients since opening its doors in 2007. About 70 percent are able to be released back to the ocean.

Although the center specialized in sea turtle rehabilitation, it has also treated many other species of turtles, birds, snakes and even bobcats. There are opportunities for people to symbolically adopt current patients. You can also support in other ways; visit their website for more information.