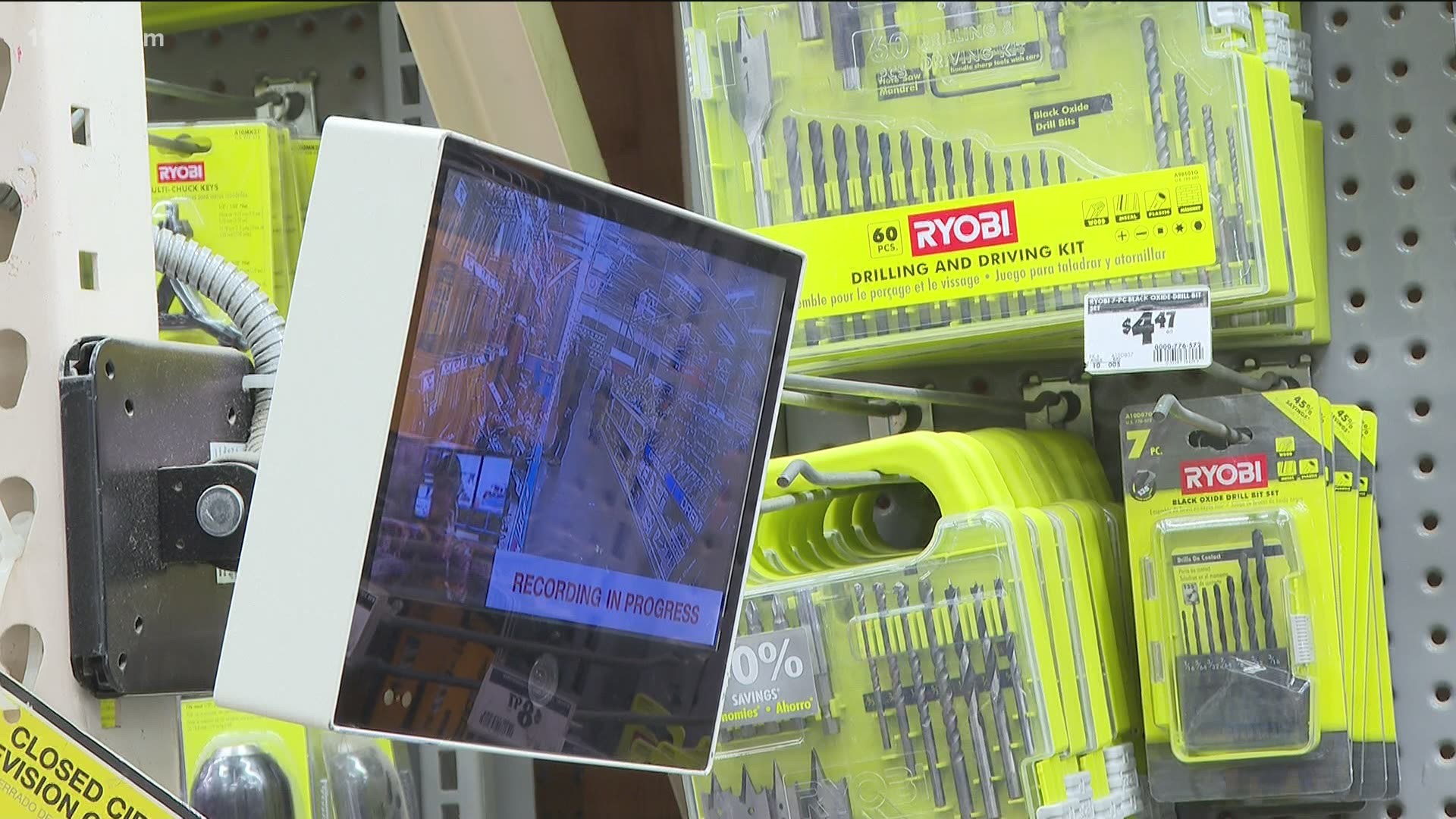 ATLANTA — Home improvement store The Home Depot is trying a new approach when it comes to curbing what they said has become a crime problem.

The crime typically involves an individual or team walking into a store, grabbing a stack of power tools, and then heading to the front of the store. Next, they either ring up a few smaller items in the self-checkout lane to mask the crime or simply walk straight out the door.

Either way, the tools are never paid for, and the individual or team will repeat the crime at the same store or various locations.

To combat such organized retail theft some power tools at Home Depot are kept on locked shelves, some are wrapped with security devices around the boxes, and security cameras keep watch on the aisles.

"We are working on a very strong strategy to, what we like to refer to as harden the target against these types of folks," explained Scott Glenn, The Home Depot's vice president of asset protection.

An evolving anti-theft strategy the company is now using, Glenn described, is a chip being inserted into power tools from DeWalt and Milwaukee brand tools.

Similar to how gift cards need to be scanned and paid for at a store to activate, the power tools need to be paid for, and then - using Bluetooth technology - the tool is activated.

Tools that haven't been activated won't turn on, according to The Home Depot.

Staff recently showed 11Alive the process of activation, and it only added a few seconds to a typical transaction. The technology is currently part of a pilot program in select Atlanta area stores and in other Home Depot markets.

The goal Glenn said is to discourage thieves, while keeping employees and customers safe and keeping costs low.

"Theft and fraud are a pressure to those cost concerns, and we want to make sure we don't have to do anything to affect that pricing for our customers," he said.

Glenn added that often power tools stolen from The Home Depot end up in a few different places.

One such place is pawn shops. In December of 2020 Marietta Police busted Pawn World, a shop suspected of trafficking stolen retails items including brand new power tools. The owner of Pawn World is currently facing several felony charges related to the bust.

Another place the power tools can end up is online marketplaces - from eBay to Craigslist, Facebook Marketplace, and a growing list of others.

"Ten, fifteen years ago, there were really one or two online resellers out there, and now we can think of 50," Glenn explained. "It is a fast, easy way to dispose of a stolen product."

A recent survey conducted by the National Retail Federation found in 2020, organized retail crime increased significantly for 31% of retailers surveyed. Forty-four percent reported a slight increase, 2% reported a decrease and the remainder reported no change compared to 2019.

Currently, lawmakers in Washington D.C. and at the Georgia State Capitol are considering legislation to target high-volume sellers of stolen retail items.

The INFORM Consumers Act introduced this month in the U.S. Senate aims to "prevent organized retail crime rings from stealing items from stores to resell those items in bulk online," according to a release from Republican U.S. Senator Bill Cassidy of Louisiana.

It describes "high-volume" sellers as people who make more than 200 sales or have more than $5,000 in revenue during a 12-month period on a marketplace.

The act would require such sellers to supply the marketplace with bank account information, government-issued identification, a working e-mail address and phone number, along with a business tax identification number.

HB 327 passed through the House and currently is being considered by the State Senate.

"Within our city, it is a daily occurrence to have calls from those big-box retailers asking for help dealing with shoplifters," said Officer Chuck McPhilamy of the Marietta Police Department.

McPhilamy said law enforcement welcomes assistance cracking down on organized retail theft, including the technology being tested by The Home Depot.

"That is doing nothing but trying to save them from that shoplifting experience and debt, therefore rising the cost of that good for everyone else willing, to be honest, and pay for it," McPhilamy said.

Back at The Home Depot, Glenn said if the technology proves successful during testing in select power tools, it could eventually be inserted into other products with an on and off switch.

"We want to lead in this space," he said. "We want to make sure the technology is not only where we want to be today, but where we are going in the future."