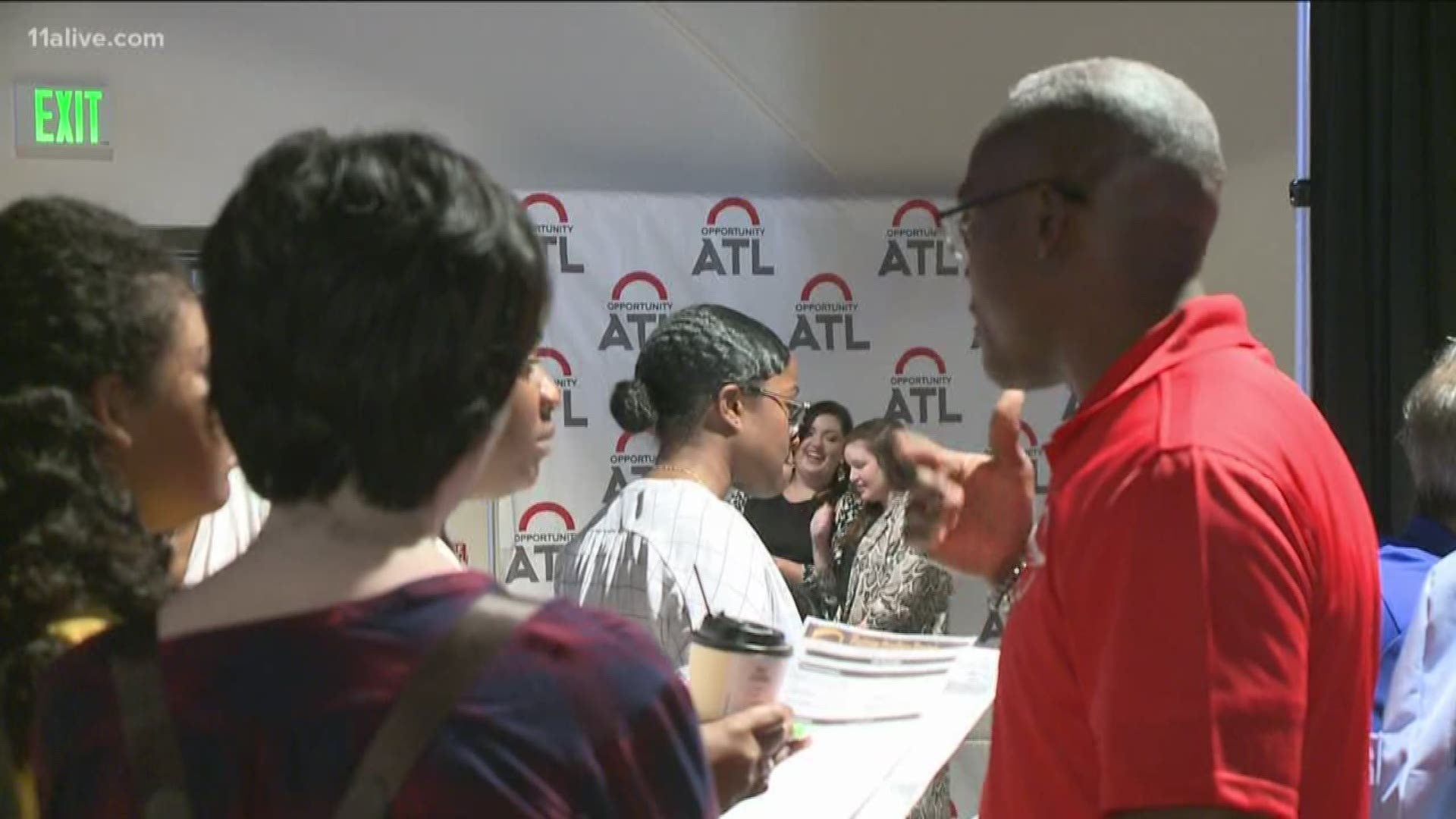 ATLANTA — One of the toughest hurdles if you're looking for a job is overcoming an arrest record that can stay with you forever.

But now, a first-of-its kind multi-county metro Atlanta effort to help erase arrest records and at the same time, help people find worthwhile jobs with a big job fair - all in one place and all on the same day.

It was organized and hosted by the Metro Atlanta Chamber and 100,000 Opportunities Initiative in East Point.

Bill Liss was there and during Bill’s off hours, he serves as a volunteer attorney with the Georgia Justice Project, one of the day’s participating agencies, helping people clear their arrest records.

It was a day this week that attracted almost a thousand people. They jammed the Impact Event Center in East Point, looking for jobs offered by 35 of Metro Atlanta's top employers.

But this job fair had an unusual twist.

It was a first-of-its kind effort by the Solicitor Generals of Fulton, DeKalb, Clayton and Douglas Counties, to help job candidates fast track the restriction and expungement of qualified arrest records.

“Most people don’t look at their records. They don’t know what’s on them. Its been years since something has happened and it gives them an opportunity to say 'I’ve moved past this. It happened when I was young,'” said Donna Coleman-Stribling, Solicitor General of DeKalb County.

“As a defense attorney I represented a lot of young people who made mistakes because they were teenagers--young dumb stuff-- and it affected them for the rest of their lives.”

Keith Gammage, the Fulton County Solicitor, hopes joint programs like this one expand throughout the state.

“We've spoken with prosecutors from across the state who are interested, and we hope this model is collaborative, suggesting to them that is the right thing to do and it is the just thing to do,” he said.

The alternatives can be daunting and life-long.

With an arrest record, even if you are found not guilty or the case is dismissed for a misdemeanor, it can have a profound effect on you trying to get a job.

For Tenita Miller, she's been turned down 20 times for jobs.

Why? Because she had an arrest on your record for something that happened 15 years ago.

Miller has two children, both in college and she wants to move on with her life and with a full-time job.

Georgia is one of 10 states that does not restrict convictions.

“4.2 million people in Georgia have a criminal record, so if you have a conviction in Georgia unfortunately the law does not allow you to deal with it, to get it off, to be able to get a job,” said Doug Ammar, Executive Director of the Georgia Justice Project.

“My hope is that Georgia law will come to a place where we cannot just forgive but really recognize and honor rehabilitation.”

Bill Liss plans to stay in touch with Tenita Miller as she moves her life forward, and he will closely follow the legislative efforts this fall to add certain prior convictions to the list that allow for Georgia record restrictions.

For further information on record restrictions in Georgia:

According to the GBI, most records can be obtained from a local sheriff’s office or police department. There are also records for felony convictions available at www.felonsearch.ga.gov.

The bureau also says that if your record is inaccurate or missing information, the Georgia Crime Information Center (GCIC), you will need documentation and/or authorization of the agency that submitted your records – most likely, the police department or sheriff’s office that arrested you. Courts, prosecutors and probation/parole officers can also submit changes electronically.

You may also contest the accuracy of your records. To do so, you must submit your fingerprints to the GCIC, which must be done by a local law enforcement agency and mailed to:

For more information on how to do that, you can email gacriminalhistory@gbi.ga.gov or call 404-244-2639.

The bureau says that, when released, the record will include a person’s complete criminal history in the state of Georgia. That includes identification data like your social security number and date of birth, as well as your arrest and case information.

You can also find resources on Second Chance Georgia.