The 37-year-old was with her husband, Brendan McLoughlin, pulling an Airstream. 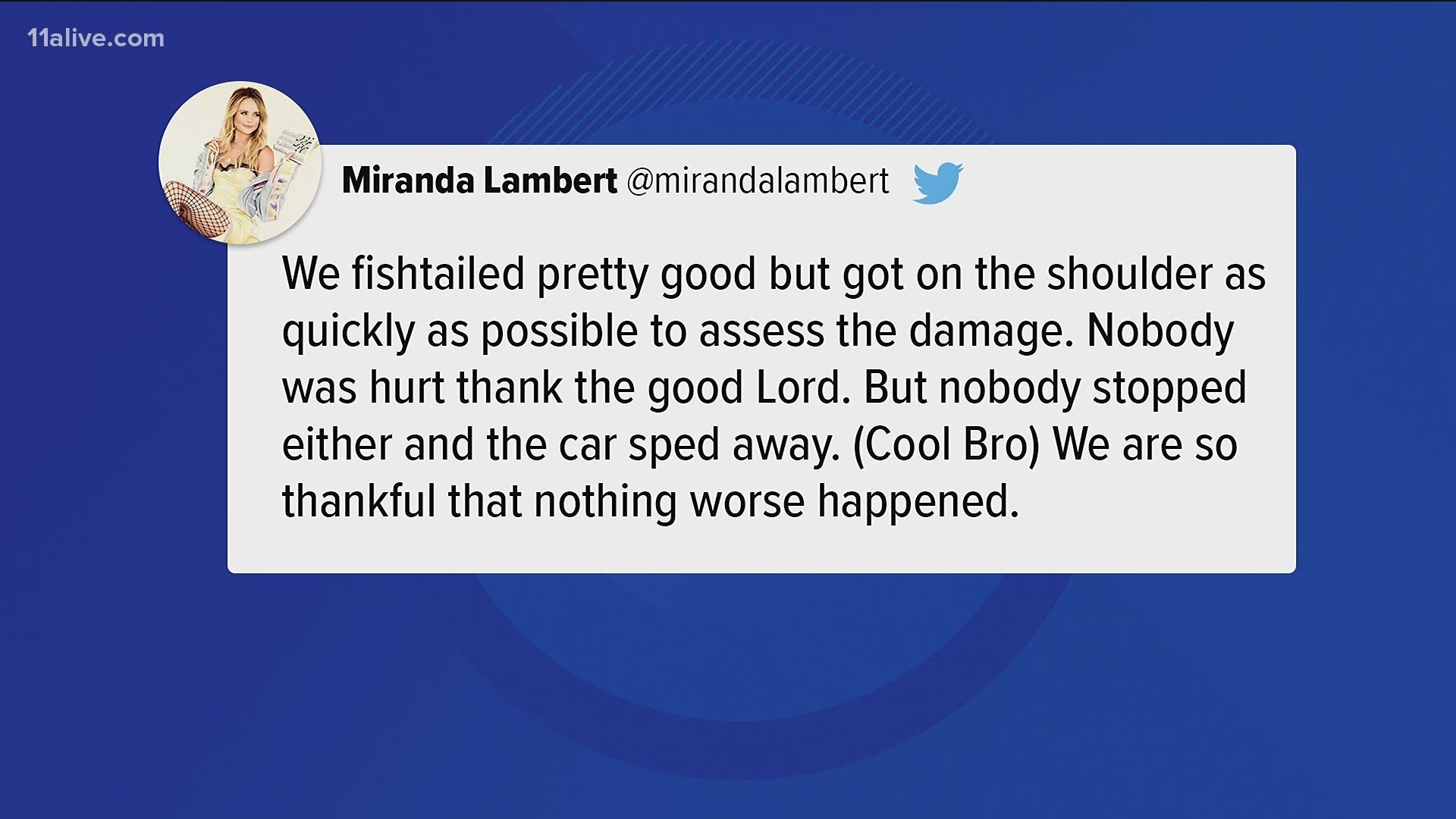 ATLANTA — Country music star Miranda Lambert had quite the scare while traveling back to her hometown in Nashville last week through Atlanta.

She said on social media that as she and her husband were heading west along Interstate 20, the vehicle and trailer they were pulling were apparently sideswiped.

"Unfortunately on the way home going through ATL, an [explicit] in a small car w/ temp plates was driving erratically & tried to squeeze between us & a semi truck going 70 on I-20W. It hit the airstream & sent us into the left lane," she said in a series of tweets.

The 37-year-old was with her husband, Brendan McLoughlin, pulling an Airstream. According to her social media accounts, the two were visiting Asheville, North Carolina, Charleston, South Carolina, and Lake Oconee in Greensboro, Georgia.

We stayed an extra day because it was so beautiful. (And ran out of clothes & needed to do laundry) I had to work too, so why not have a view while you zoom? I have a feeling we will be back there in the summertime to enjoy the lake and the friendly people. pic.twitter.com/3FdhjFiImF

That lake is a secret I didn’t know about dang it 😂 Unfortunately on the way home going through ATL, an asshole in a small car w/ temp plates was driving erratically & tried to squeeze between us & a semi truck going 70 on I-20W. It hit the airstream & sent us into the left lane pic.twitter.com/ZnZVXGQqtP

She said that "nobody was hurt thank the good Lord" and that they are "so thankful that nothing worse happened."

Lambert said the vehicle and the trailer were drivable so they filed a police report and went home.

11Alive has reached out to multiple jurisdictions to get a copy of the police report.

Lambert thanked her mother and said: "I called mama right away to say that I know her prayers are always heard cause I know she prays for us every morning about 4:30 am. Especially when we are on the road."

"Attach the airstream to the hitch, get in the car and go," he wrote on Instagram Wednesday. "Traveling, no matter where it is, has always been a love of mine. Walking the streets of a place you’ve never been, learning the history, it’s absolutely fascinating. Anyone who knows me though, knows my absolute love for food."

Lambert said the trip was "beautiful."

"Anyway, overall it was an amazing trip and we learned we have a lot to see and a lot to be grateful for."