VIDEO: Car smashes into couple, tossing woman off her bike and never stops to see what happened

Surveillance video slows the black car following behind them, then suddenly swerving into their lane, hitting the woman and tossing her from her bike. 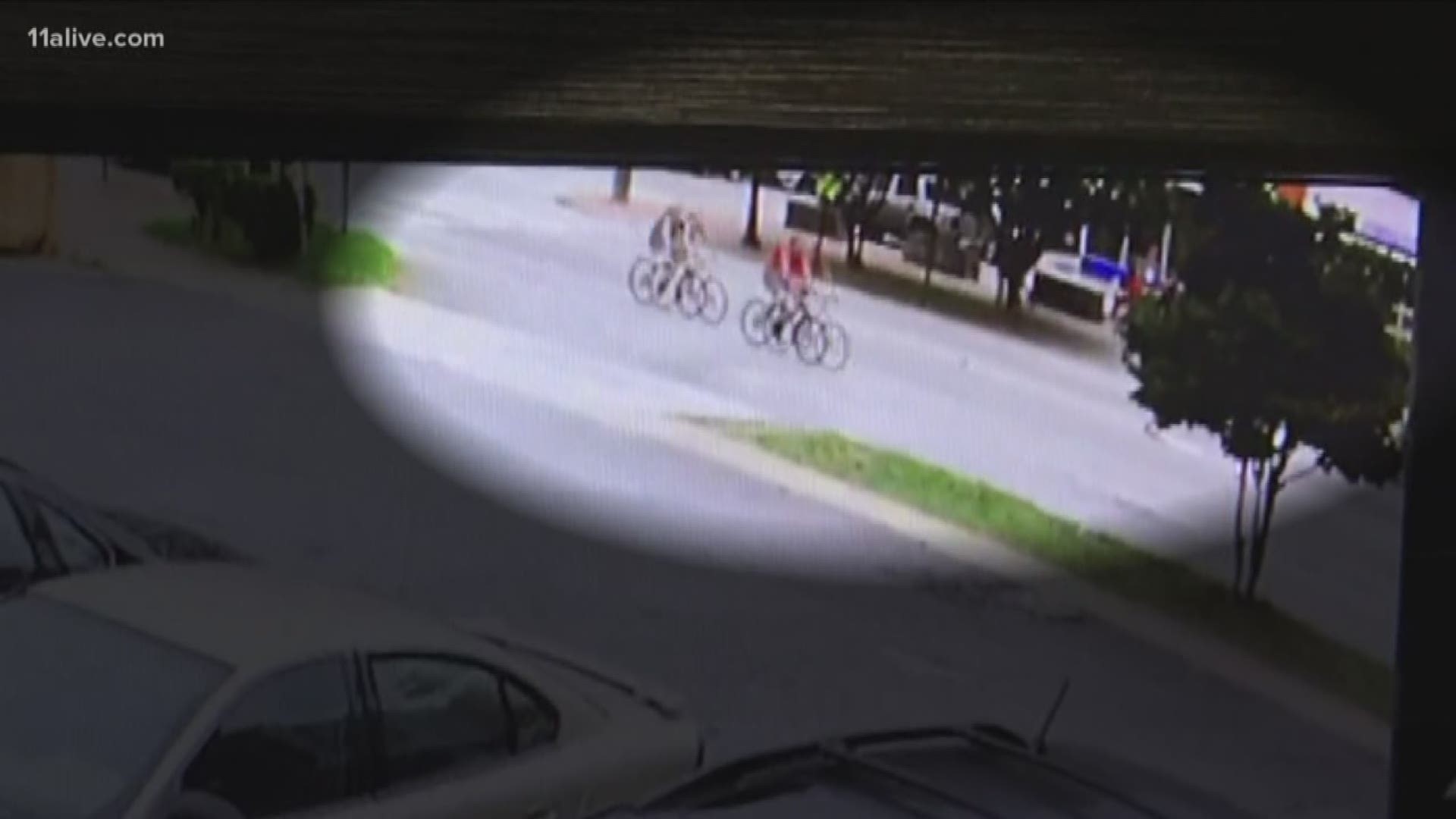 ATLANTA — A car smashed into a couple riding their bikes on Saturday afternoon and never stopped to see if the two were okay.

David Warren and his wife Valerie were biking to an Atlanta United game, traveling in the bike lane of Hosea Williams Drive in the Kirkwood neighborhood. Surveillance video slows the black car following behind them, then suddenly swerves into their lane. Valerie was thrown from her bike while the car only clipped the handlebars of David’s bike.

David felt the car nudge him, but was in front of his wife and didn’t know she took a direct hit.

“And then I turned around and I saw Valerie on the ground, and it took me a second to process what happened,” David recalled. “The scariest part was at the beginning, when she was on the ground, bleeding out of her heard, her eyes open but she couldn’t talk.”

Valerie said she doesn't even remember getting hit.

"I was knocked unconscious,” Valerie explained slowly, still on pain medication when talking to 11Alive’s Hope Ford on the Fourth of July. “I next remember being at Grady Hospital in the ER. I could just hear people talking about me.”

Valerie suffered a broken collarbone, ribs, and right thumb. She also has a small subdural hematoma, or a collection of blood outside the brain, six staples and a contusion on her lung. She’s was able to go home after a few days.

David collected surveillance video from a nearby shop and videos from witnesses who chased after the car when the two were hit.

“It’s just sort of chilling, re-watching that,” David said, adding that he is sending the video to police.

Valerie hasn’t seen the video and isn’t sure she wants to.

Besides bringing the person responsible for hitting them to justice, the couple wants to see more progress in helping keep cyclists and pedestrians safe.

“It’s dangerous on the streets on a bicycle," David said. "Atlanta, is way better than what is used to be. I’ve lived here for 20 years, and it’s light years ahead of what it was, but it has a long way to go."

In fact, the Governor’s Highway Safety report shows pedestrian deaths are up 32 percent in Georgia, but only up three percent nationally.

RELATED: Motorcyclist rear-ended by one vehicle, run over by second in serious hit-and-run

"The cars are going too fast. And our roads are designed for people to go too fast. We're doing it wrong when it comes to road design, and we are only interested in moving cars as fast as possible from one road to the next,” Hagen said. "Studies show, when you slow cars down, people don't get killed. Not at the same rate."

Hagen and the Warrens agree: bike lanes are great, but may not be the best option for separating vehicles and cyclists.

“It’s just paint on a piece of asphalt. It doesn’t really protect you,” David said.

He would love for more areas to adopt complete streets or streets designed for all travel, such as raised crosswalks, bike lanes with barriers separating them from cars and lower speed limits.

As they wait for more information about the person who hit them, Valerie hopes to recover and is thankful for the staff at Grady Hospital for taking care of her. She said while she is upset at the person who hit her, she is more confused about one thing: “If you hit someone, why wouldn’t you stop?”

David described the car as a black Hyundai Accent that would have been traveling along Hosea Williams Road at 4:40 p.m. on June 29, 2019.