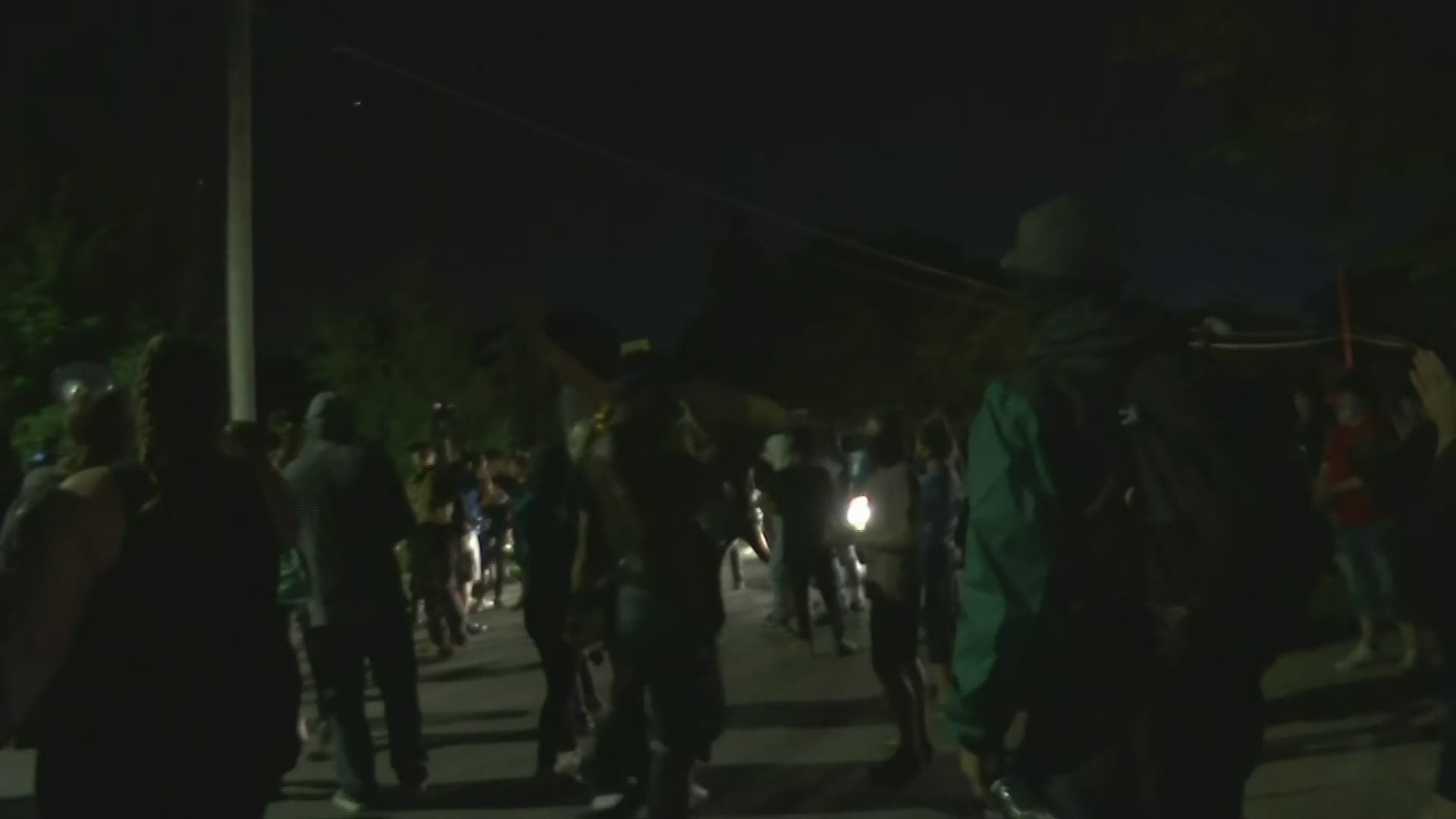 A judge postponed a decision Friday on whether a 17-year-old should be returned to Wisconsin to face charges in the killing of two people on the streets of Kenosha during unrest following the police shooting of a Black man, Jacob Blake.

The Illinois judge granted Kyle Rittenhouse’s request to delay the extradition hearing to Sept. 25 during a brief hearing that was streamed online. Rittenhouse, who is being held, did not appear.

Blake’s shooting — which left him paralyzed and was caught on cellphone video — sparked several nights of protests in Kenosha, making it the latest focal point in a reckoning over policing and racial injustice that has gripped the country since the death of George Floyd at the hands of Minneapolis police.

On Tuesday, the third night of those protests, Rittenhouse, a white teen who was armed with a semi-automatic rifle, was caught on cellphone video as he walked Kenosha’s streets with other armed civilians, saying he was protecting businesses from vandalism. Prosecutors have accused him of killing two men who tried to disarm him and wounding a third. His lawyers have argued he was acting in self-defense.

Rittenhouse was taken into custody on Wednesday in his hometown of Antioch, Illinois, about 15 miles (25 kilometers) from Kenosha. He would face a mandatory life sentence if convicted of first-degree homicide, the most serious charge. Under Wisconsin law, anyone 17 or older is treated as an adult in the criminal justice system.

Assistant public defender Jennifer Snyder, who was representing Rittenhouse, asked for a delay in the extradition hearing, so her client would have time to hire a private attorney. She said Rittenhouse had spoken by phone with his mother since his arrest.

Lee Filas, spokesman for the Lake County, Illinois, state’s attorney, declined to comment on whether other charges were being considered for anyone who may have acted as an accomplice to Rittenhouse.

According to the criminal complaint, Joseph Rosenbaum, 36, of Kenosha, followed Rittenhouse into a used car lot, where he threw a plastic bag at the teen and attempted to take his weapon. The medical examiner found that Rosenbaum was shot in the groin, back and hand. He also suffered a superficial wound to his left thigh and a graze wound to his forehead.

Gaige Grosskreutz, 26, who appeared to be holding a gun, was then shot in the left arm after approaching Rittenhouse, the complaint said.

RELATED: Calls went out for armed vigilantes in Kenosha before deadly shooting

Another Rittenhouse attorney, Lin Wood, said Thursday that the teenager was acting in self-defense.

“From my standpoint, it’s important that the message be clear to other Americans who are attacked that there will be legal resources available in the event false charges are brought against them,” he said. “Americans should never be deterred from exercising their right of self-defense.”

Credit: AP
Protesters observe a moment of silence while marching Wednesday night, Aug. 26, 2020, in Kenosha, Wis., near the scene of a fatal shooting Tuesday night. A white, 17-year-old police admirer was arrested Wednesday after two people were shot to death Tuesday during a third straight night of protests in Kenosha over the police shooting of a Black man, Jacob Blake. (AP Photo/David Goldman)

The weapon Rittenhouse was carrying belonged to a friend, according to a tweet from Wood on Friday.

Kenosha police faced questions about their interactions with the gunman on Tuesday night. According to witness accounts and video footage, police apparently let the gunman walk past them and leave the scene with a rifle over his shoulder and his hands in the air, as members of the crowd yelled for him to be arrested because he had shot people.

Kenosha County Sheriff David Beth said the gunman likely slipped away because the scene was chaotic, with lots of radio traffic and people screaming, chanting and running — conditions he said can cause “tunnel vision” among law officers.

Video taken before the shooting shows police tossing bottled water from an armored vehicle and thanking civilians armed with long guns walking the streets. One of them appears to be Rittenhouse.

The state Department of Justice on Friday released new information about the Blake shooting, including the names of two other officers on the scene Sunday.

Authorities said the officers were responding to a call about a domestic dispute when they attempted to arrest Blake, though they didn’t explain why. In cellphone video posted on the internet, two officers can be seen following Blake with their guns drawn as he walks away from them. One then shoots him seven times in the back as he leans into his SUV, in which three of his children were seated.

State authorities identified the officer who shot Blake as Rusten Sheskey, a seven-year veteran of the Kenosha Police Department. The other two officers were Vincent Arenas, who has been with the department since February 2019 and previously served with the U.S. Capitol Police Department, and Brittany Meronek, who joined the Kenosha police force in January.

Sheskey shot Blake while holding onto his shirt after he and Arenas each unsuccessfully used a Taser on him, according to a news release from the department Friday. State agents later recovered a knife from the floor on the driver’s side of the vehicle, the department said. State authorities did not say Blake threatened anyone with a knife.

Sheskey and Meronek did not respond to emails sent to possible addresses for them and Arena did not return a phone message left at a possible phone number for him. No one answered the door Thursday at Sheskey’s home.

It was not immediately clear if the officers had attorneys.

Meanwhile, an attorney for Blake said that his client — who had been handcuffed in the hospital — was no longer in restraints.

Patrick Cafferty, who is representing Blake in that case, said the warrant has now been vacated. The Milwaukee County Sheriff’s Office said in a statement that Blake was no longer in police custody because he had posted bond. As a result, the “hospital watch,” in which deputies were stationed at the hospital, was discontinued.