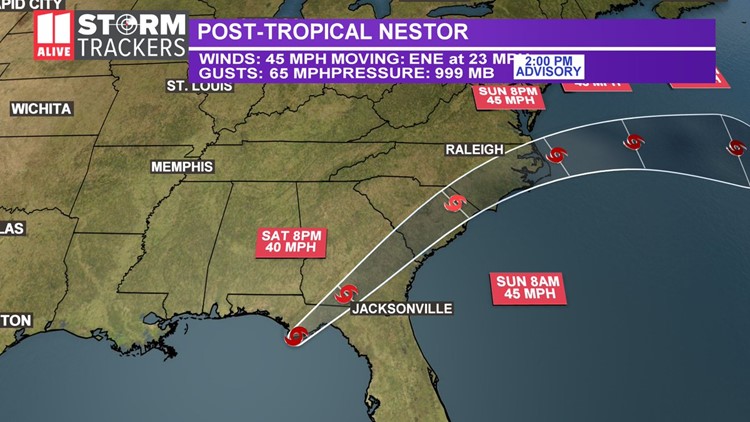 ATLANTA — Post-Tropical Cyclone Nestor has officially made landfall near Apalachicola, Florida. The storm lost all tropical features earlier in the afternoon.

Many people may have plans to enjoy the cooler weather outside at the Georgia football game this weekend, but Mother Nature is throwing a big wrench in those plans.

Impacts from gusty winds and heavy rainfall amounts are expected across much of the state from Nestor.

The stronger winds and higher rainfall amounts are expected across the southern and eastern portions of the state.

The latest storm track from the National Hurricane Center indicates the center of Nestor will move across the lower two-thirds of Georgia during the day on Saturday before moving into South Carolina, then North Carolina on Sunday.

As of Saturday morning at 5 p.m., Post-Tropical Cyclone Nestor was centered about outside of Tallahassee, Florida with maximum sustained winds of 40 mph.

Nestor is moving to the east-northeast, at 23 mph.

On the current forecast track, Nestor will move across the Florida Panhandle and into south Georgia through the remainder of Saturday afternoon. Then, it will move across portions of the southeastern United States before exiting the coast of North Carolina into the western Atlantic by late Sunday.

Maximum sustained winds are near 45 mph with higher gusts. Nestor is forecast to weaken after it moves inland.

Tropical-storm-force winds extend outward up to 240 miles, mainly to the east of the storm's center.

All Storm Storm Warnings have been discontinued.

As Nestor moves inland, it will move across portions of the Florida panhandle and southwest Georgia devastated by Hurricane Michael just one year ago.

Right now the forecast calls for the storm to have maximum wind speeds between 40-50 mph as it moves through the southeast. In the Atlanta Metro Area, winds will be in the 15 to 20 mph range, with higher gusts.

The rain will be off and on, scattered and light to moderate in intensity. Right now, .25 to .50 inches of rain is expected around the metro. Higher amounts well south of the city.

A wind advisory has been issued for much of the southern and eastern portions of the state for sustained winds of 15-to-25 mph and wind gusts in excess of 40 mph. Fallen trees and limbs are expected in that area. Viewers there are advised to secure loose objects.

This type of weather will not stop people from tailgating so be sure you use sandbags and stake tents into the ground as flying canopy tents can be dangerous.

RELATED: A year ago, she woke up, started making cinnamon rolls ahead of a storm and never returned