A call for repairs didn't go as expected when a contractor showed up with the Confederate flag billowing. 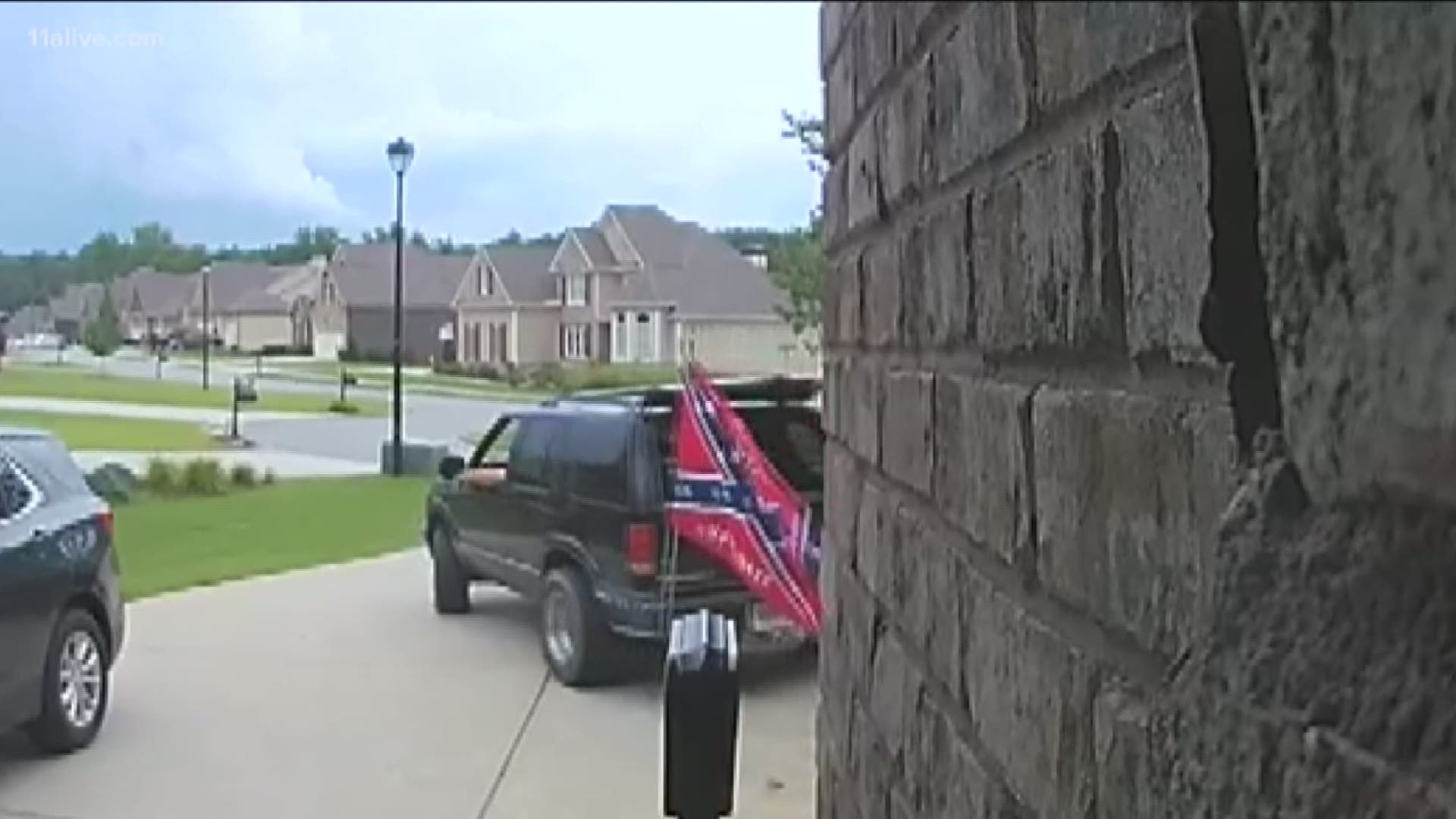 DALLAS, Ga. — Video of a black Atlanta couple turning away a contractor who arrived in their driveway with a giant Confederate flag hanging from his truck is going viral. But, as they told 11Alive, they hope it sparks deeper conversations on race and civility, despite people disagreeing.

Zeke and Allison Brown told 11Alive they had been trying to arrange to get repairs done on their golf cart's brakes. They were able to hire a contractor, and after some back and forth, were finally able to nail down this past Saturday as the day to get the repairs done.

But, as doorbell camera video from the couple's Dallas, Georgia home shows, it didn't go quite as expected when the contractor showed up with the Confederate flag billowing behind the truck.

"I do apologize, I know you've come from a very long way, but we're going to use someone else," Allison can be heard saying in the video, as she answers the door.

"She's upset with the flag," Zeke tries to explain.

"I'm beyond upset with the flag," Allison adds.

The contractor can be heard faintly saying he would take it down, but Allison responds: "You don't need to take it down."

"You can continue to believe what you believe, sir, but I cannot pay you for your services," she says. "Thank you. Have a good day."

The video has since gone viral online - where it's been garnering the attention of the likes of comedian D.L. Hughley, musician Questlove and more.

11Alive reached out to the couple, who said they were shocked.

"I was very angry," Allison said. "I felt violated. This gentleman brought this massive flag into our yard with our neighbors in full view - it was very disrespectful to my family, to my husband. And he saw nothing wrong with it."

After the couple turned down the contractor, Zeke said he stepped back inside to collect his thoughts - and decided he wanted to act.

"As we were having that exchange, I realized that he was a young man and obviously didn't have a full grasp or understanding of anything about that flag ... It just made me even more confused as to why he would be flying it," Zeke said. "I knew I had to do something, I just wanted to make sure I did it in the right way."

Zeke said when the contractor sent him a message later, saying he didn't know the flag was offensive to the couple, Zeke said he knew exactly how he would respond.

In a message he shared with 11Alive, Zeke wrote:

"Yes, it is extremely offensive to anyone of Color. I understand it is part of American History, but that flag stood for a time in history where people such as myself had a very bad way of life. The few minutes I got to speak with you, I saw nothing that represents that flag. I saw a very respectful young man that works very hard to make his way. I totally respect that because that's exactly what I do. Michael, I hope this small interaction causes you to do a little research on how several Americans feel about the confederacy. I knew it's part of history, so is Nazi Germany. Germans have made it well known that flag is absolutely unacceptable.

It was a pleasure meeting you.

"There was definitely hope for him to not get caught up in that hate," he added in an interview.

11Alive called and messaged the contractor for comment, but did not get one.

Both Zeke and Allison said they were taken aback with the speed that the video - posted to Facebook with permission by their nephew - spread.

"Later on the next day, I saw that it was already out there - 100 thousand plus," he said, adding that didn't think anything of sharing it. "It took off faster than I anticipated."

Zeke said the personal response to the video has been nothing but positive.

"They all understand the need to have these conversations and they felt that myself and my wife handled things very graciously," he said.

As for the social media response: "They take it and flip it several different ways," he said. "Actually a lot of it is entertaining. very far from the truth. But very entertaining."

Zeke and Allison said despite the video going viral, they hope it sparks a deeper conversation.

"My hope is that people realize that you can confront somebody calmly and sternly ... you can just talk to someone calmly and get your point across and they still understand perfectly clearly what you mean," Allison said, adding that it's also her conscious choice to spend her money with whomever she chooses.