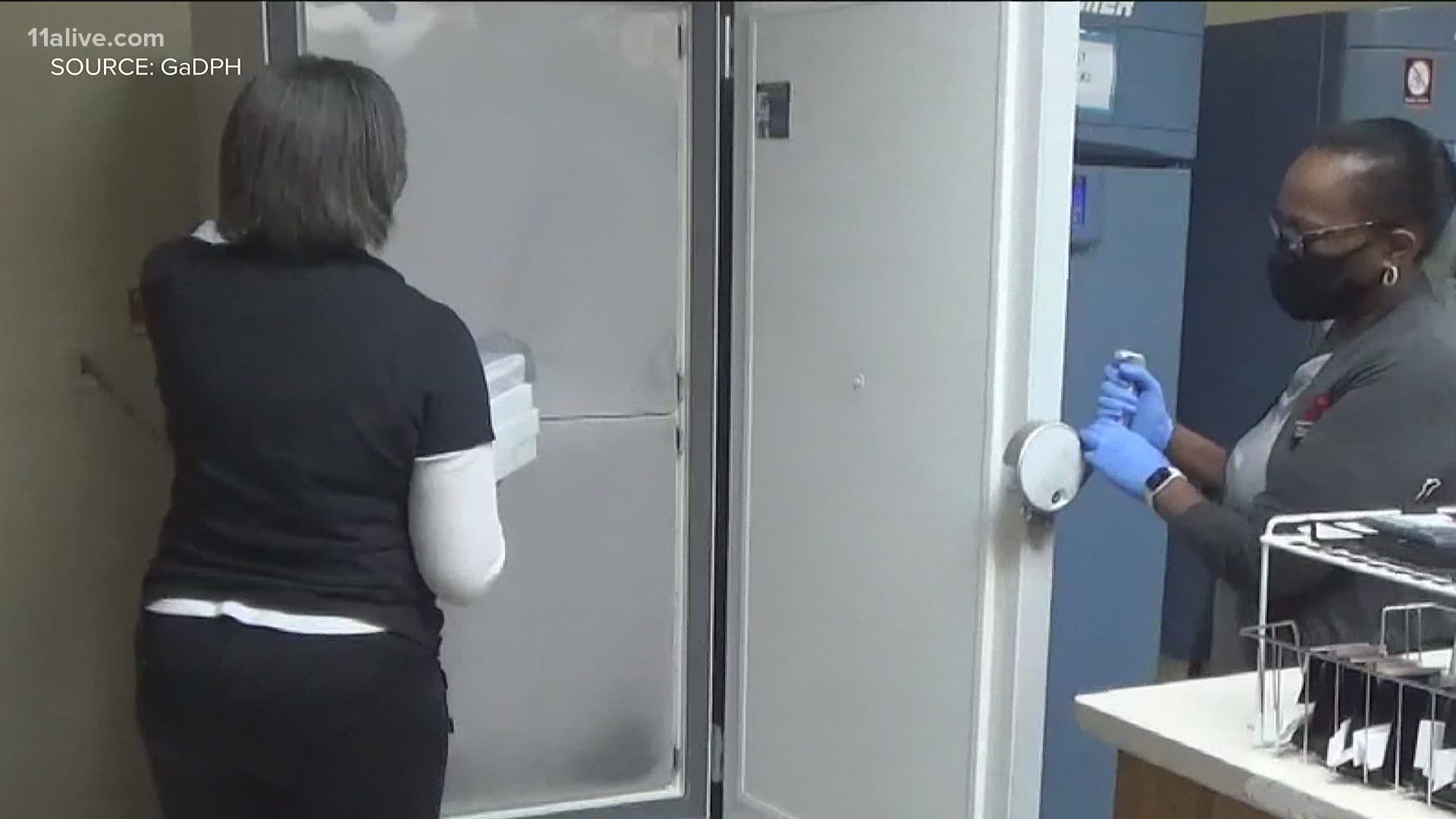 ATLANTA — Small white boxes were wheeled into the offices of the Coastal Health District of the Georgia Department of Public Health on Monday.

Inside the boxes and packaged between insulation and dry ice were 5,850 doses of Pfizer's COVID-19 vaccine that are now being stored between -70 to -80 degrees Celsius.

Following state and CDC recommendations, the first doses in Georgia will be given to healthcare workers and residents of long-term care facilities. The Coastal Health District covers Chatham, Glynn, and surrounding counties.

"Knowing that we have the vaccine, that we are really beginning to distribute it to those at highest risk and those that are putting their lives on the line every day as they care for people with COVID, is just phenomenal," said Dr. Lawton Davis, director of the Coastal Health District.

Davis said a small number of the district's healthcare workers would be vaccinated on Monday, but most of the vaccine doses would be administered starting Tuesday.

Georgia Governor Brian Kemp and the Commissioner of the Georgia Department of Public Health, Dr. Kathleen Toomey, are scheduled to be at the Chatham County Health Department in Savannah on Tuesday afternoon, as front-line healthcare workers begin receiving vaccinations there.

No shipments of the COVID-19 vaccine arrived in the Atlanta area on Monday and aren't expected until Wednesday, according to Georgia Department of Public Health spokeswoman Nancy Nydam. She also told 11Alive no shipments are expected to arrive anywhere in the state on Tuesday.

Later on Monday, DPH said that Georgia now expects to receive an additional 84,825 doses of the Pfizer vaccine in this initial allocation and that more would likely continue to arrive steadily after that.

A press release from the state health department on Monday stated they're anticipating that a second vaccine, from the pharmaceutical company Moderna, will be authorized for use later this week.

"Assuming the vaccine is authorized for use by FDA, shipments of the Moderna vaccine should begin arriving in Georgia next week," the release said.

"We are preparing to deliver the vaccine to our staff within 24 hours of receiving the vaccine on-site," said Christy Norman, vice president of pharmacy services at Emory Healthcare.

Norman said that once the vaccine arrives, Emory will be offering it to staff, registering people for specific time slots, and then will begin administering doses.

"We will expect to receive vaccines in small quantities over the coming weeks and months," Norman added.

Healthcare staff will also be asked to monitor their health for any side effects after receiving the shot, according to Dr. Marybeth Sexton, a member of the Serious Communicable Disease Unit (SCDU) team at Emory University Hospital.

"We do know that some of the side effects of the vaccine, things like fatigue, headache, and muscle aches are also symptoms of COVID," Sexton said. "That doesn't mean you have COVID or you're contagious but they definitely could confuse someone about which one they had."

Sexton added the side effects don't include respiratory issues such as a cough, congestion, or shortness of breath. If anyone experiences those symptoms she suggests they be evaluated for COVID.

As a general rule, Sexton said to schedule your vaccination at a time when you don't have anything critical to address in the following 24 hours, allowing you to monitor and side effects. 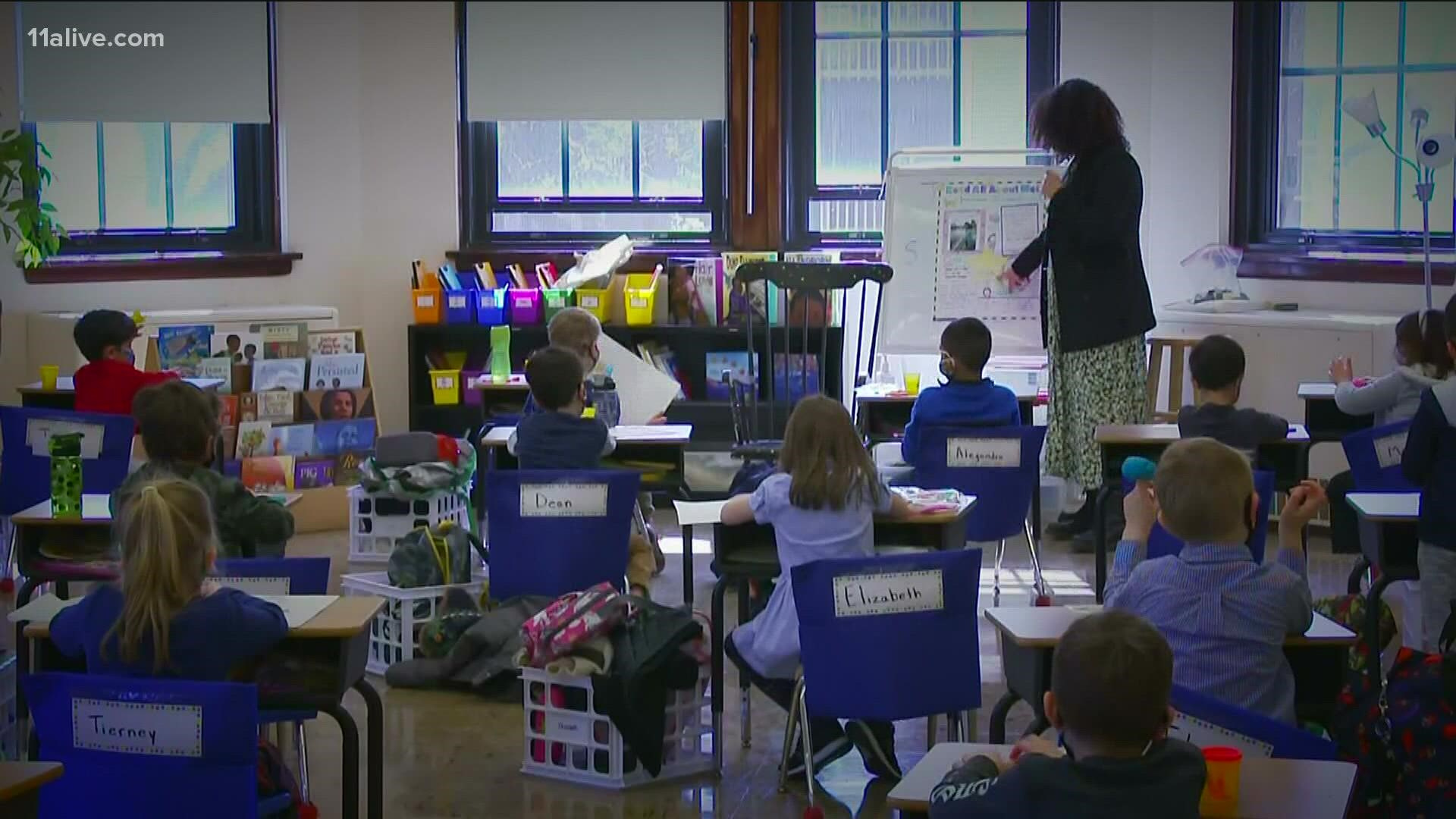