State numbers show as of April 6 there were 327 suspected breakthrough cases. At the time more than 1.2 million Georgians were fully vaccinated against COVID-19. 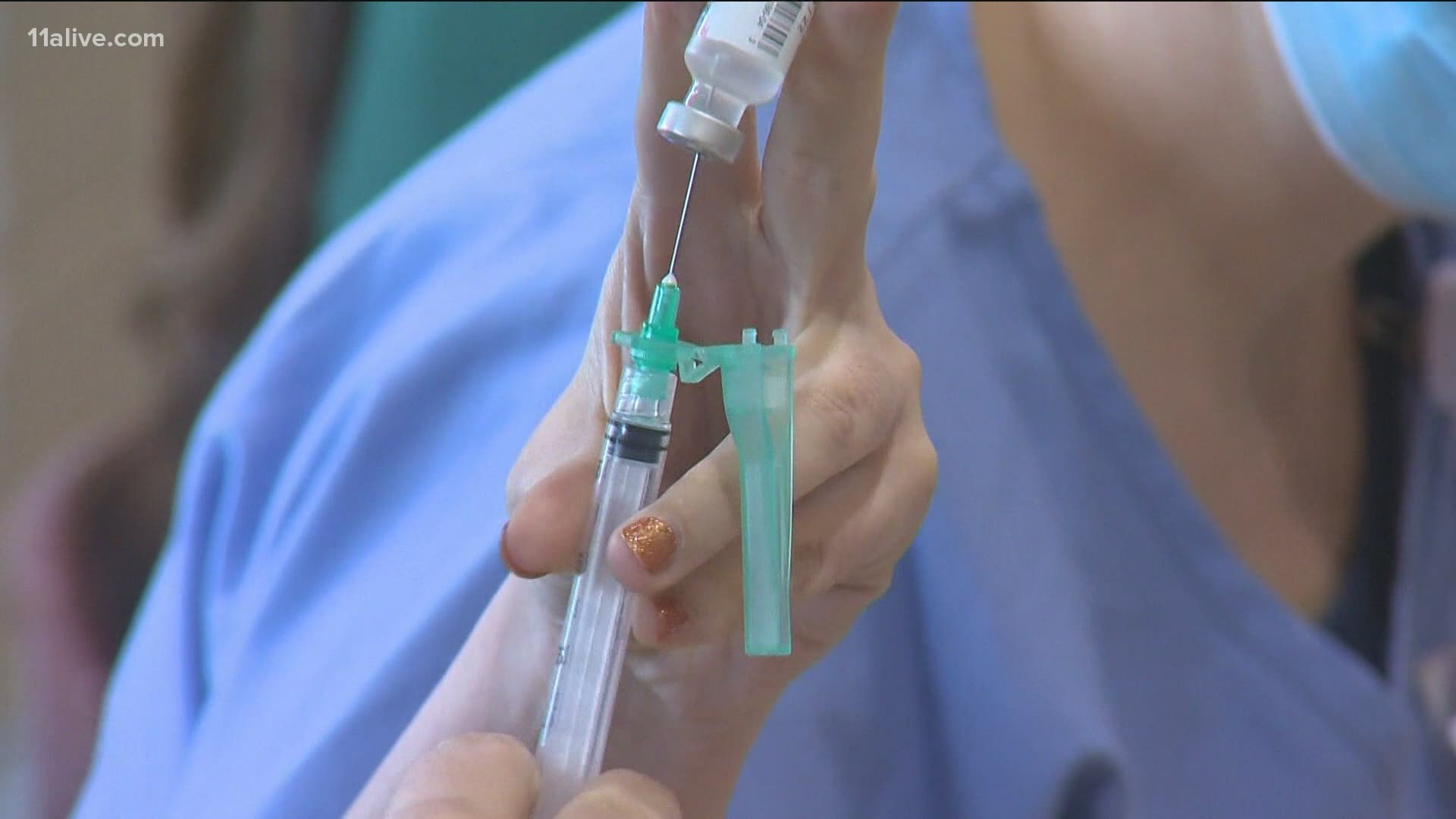 ATLANTA — It's known as a "breakthrough case" when a person receives their final COVID-19 vaccination dose and then 14 days or more later, they test positive for the virus.

Tomme Eldridge of Floyd County was one of those cases.

"Now that I'm better I'm thinking I'm so thankful that I did get the vaccine because it was such a lesser case," Eldridge said.

Eldridge, who lives in Rome and works as a nurse, said on Feb. 5, she received her second and final Pfizer COVID-19 vaccine dose. By March 26 though, she developed mild symptoms of the virus and tested positive that day.

She believes the vaccine stopped her symptoms from developing into a serious condition.

"I have underlying medical conditions, she said. "Had I not had the vaccine I have no doubt in my mind my sickness would have been much worse."

"I couldn't smell tea tree oil or Vicks VapoRub and you know they permeate the whole room," said Ginger Eatman of Paulding County.

Eatman shared a similar story. She received her second Pfizer vaccine dose on February 17. Then in March, she became congested and lost her sense of smell. She was tested for COVID-19 and on March 20, the result came back positive.

Eldridge and Eatman both said they're now considered clear of the virus.

Their stories aren't unique but are considered rare.

With Pfizer and Moderna reporting its vaccines are considered 95 percent and 94 percent effective respectively against any COVID-19 infection, cases developing amongst fully vaccinated individuals are expected.

Numbers obtained by 11Alive from the Georgia Department of Public Health show such cases are suspected of being extremely infrequent though. State data lists 327 suspected breakthrough cases as currently being investigated by DPH.

"Since we are currently investigating all of these suspect breakthrough COVID-19 cases, it is difficult to report the number of deaths or hospitalizations—this is the information we are working to collect and confirm at this time," Nydam wrote by e-mail.

RELATED: CDC: COVID-19 variant first found in Britain now most common in US

The 327 cases were identified amongst new COVID-19 cases in Georgia between January 5 and April 6. Because two weeks must pass for someone to be considered fully vaccinated, March 23 is the last date someone could have received a vaccine dose to be fully vaccinated by April 6.

As of March 23, more than 1.2 million Georgians had received their final vaccine dose, meaning the 327 suspected breakthrough cases represent less than .03 percent of fully-vaccinated Georgians at that time.

"This is way less than one percent. It's really consistent with a lot of what we have seen from around the country," said Dr. Gavin Harris of Emory University. Harris is an assistant professor of medicine in the departments of Pulmonary, Allergy, and Critical Care Medicine, as well as Infectious Diseases.

"If you look at other vaccines, other diseases they don't all prevent 100 percent of disease," Harris said "They do prevent those severe cases and that is what we are really looking for."

RELATED: What you should (and shouldn't) do with your vaccination card

Harris added everyone should seek out being vaccinated to avoid those severe cases, but once vaccinated they need to remain cautious.

"It is really why the CDC is still putting out guidelines to say if we are in public places, if we are in mass gatherings, we still need to wear a mask, wash our hands, and socially distance," Harris said.

Eatman agreed and plans to keep wearing a mask and practicing social distancing.

She is a member of the Georgia Festival Chorus and wants to return to more normal life so in-person concerts can return. For now, though, she said the risk of people become infected, even once vaccinated, still needs to be taken seriously.

Eldridge doesn't disagree and hopes others can learn from her bout with the virus.

"I think people are starting to let their guards down after they get the vaccine and I just want to make sure people know it's not a foolproof system," she said.