'I was surprised': Atlanta Police trying out program again after it said it wasn't worth $280K price tag 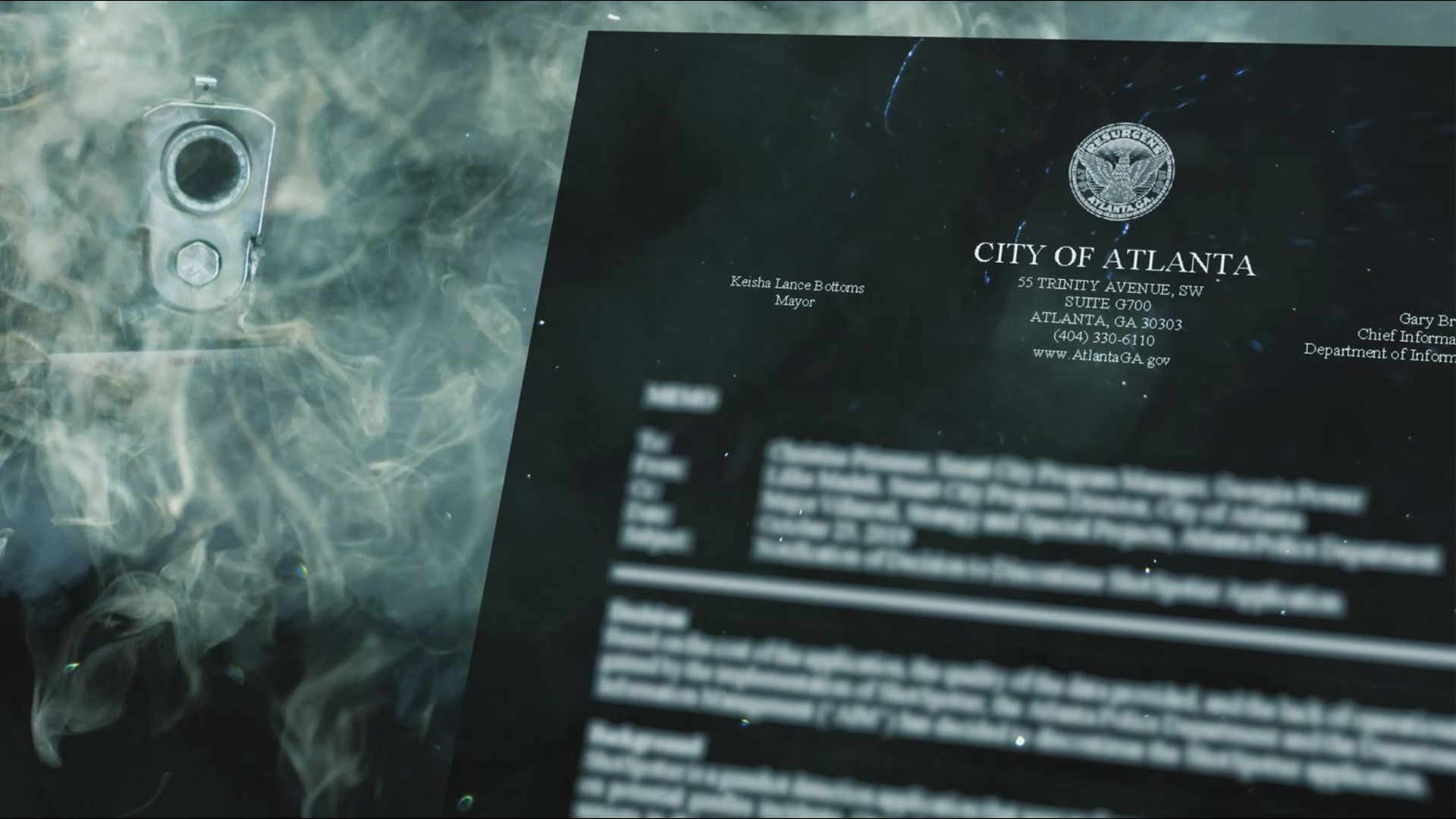 ATLANTA — Atlanta police officers are about to test out technology aimed at stopping gun violence. But this isn't new technology. In fact, APD has tried it before.

But, as 11Alive's investigative team, The Reveal, uncovered, police had little faith in the program, ShotSpotter, the last time they used it.

APD will try to fill that gap by testing ShotSpotter, a gunshot detection system, that boasts the ability to help police, “respond to, investigate and deter crime.”

It sounds promising, but the police department already tried the system just two years ago.

“I was surprised when I heard earlier this year that the city had entered into this agreement with ShotSpotter again to try their technology,” Hillis expressed.

His surprise came because of a report from APD, written in 2019, that said the system wasn’t worth what would be a roughly $280,000 annual price tag.

“The police chief at the time, which was Chief (Erika) Shields, presented to the public safety committee that it was not as successful as they hoped it would be,” Hillis said.

The report, obtained by The Reveal, showed the system helped APD make five arrests during its one-year trial. But with that $280,000 annual price tag, APD said it could just hire five full-time officers instead.

The report went on to say ShotSpotter often duplicated gunfire alerts, so it was overreporting the number of shootings actually happening.

“We haven’t been given any new information as to what has changed to make it worth a second shot and makes it better program than what it was when it generated so many false positives,” Hillis said.

APD wouldn’t give us that information either, declining our request for an interview. We tracked down a police department that is using ShotSpotter now to see how effective it is for them.

“ShotSpotter’s just one piece of that puzzle that helps us increase our capabilities to identify, you know, violent offenders and make arrests,“ Cpt. David Gay with the Savannah Police Department said.

Savannah Police have used ShotSpotter since 2015. Cpt. Gay says the city pays $220,000 a year for the system that covers four square miles. He said the system is worth the investment, but he couldn’t tell us if the city’s crime rate would be different without it. And there are few cases where police can point to ShotSpotter and say it directly helped solve a crime.

“There’s three things that solve crimes. There’s confessions, there’s witnesses and there’s evidence. So that’s the three things a detective is always pursuing. ShotSpotter, you know, if you draw a circle, ShotSpotter’s just one line in that circle,” Gay explained.

While Savannah Police said the system works for them, Hillis said for Atlanta, the jury is still out.

“I mean, the last one wasn’t successful, and I haven’t been given the information that I’ve asked for an apparently you have asked for to know what has changed,” Hillis said.

The Reveal reached out to ShotSpotter for a response to this investigation. Sam Klepper, Senior Vice President of Marketing and Product Strategy, sent us this statement:

“Over the last few years, ShotSpotter has made significant improvements in the system’s ability to detect and locate gunfire incidents with enhancements to our sensor capability and machine classification performance. New analytical tools and reports for investigators have helped to increase investigators’ understanding of what likely happened as they arrive at the crime scene which is particularly useful for witness and suspect interviews. Training for officers has been expanded with more self-service and group classes. Finally, the company’s customer onboarding process now better guides police agencies as to how to make the system most impactful for them and better engage their communities.”

Activist: 'I guess if you’re a rapist, come on to Georgia because we’re not prosecuting folks here'