Corey Sligh, a former actor on "The Young and the Restless," was charged with molesting a 7-year-old girl. A jury convicted him this past July, but a judge claims he made a mistake that could allow Sligh to walk free. 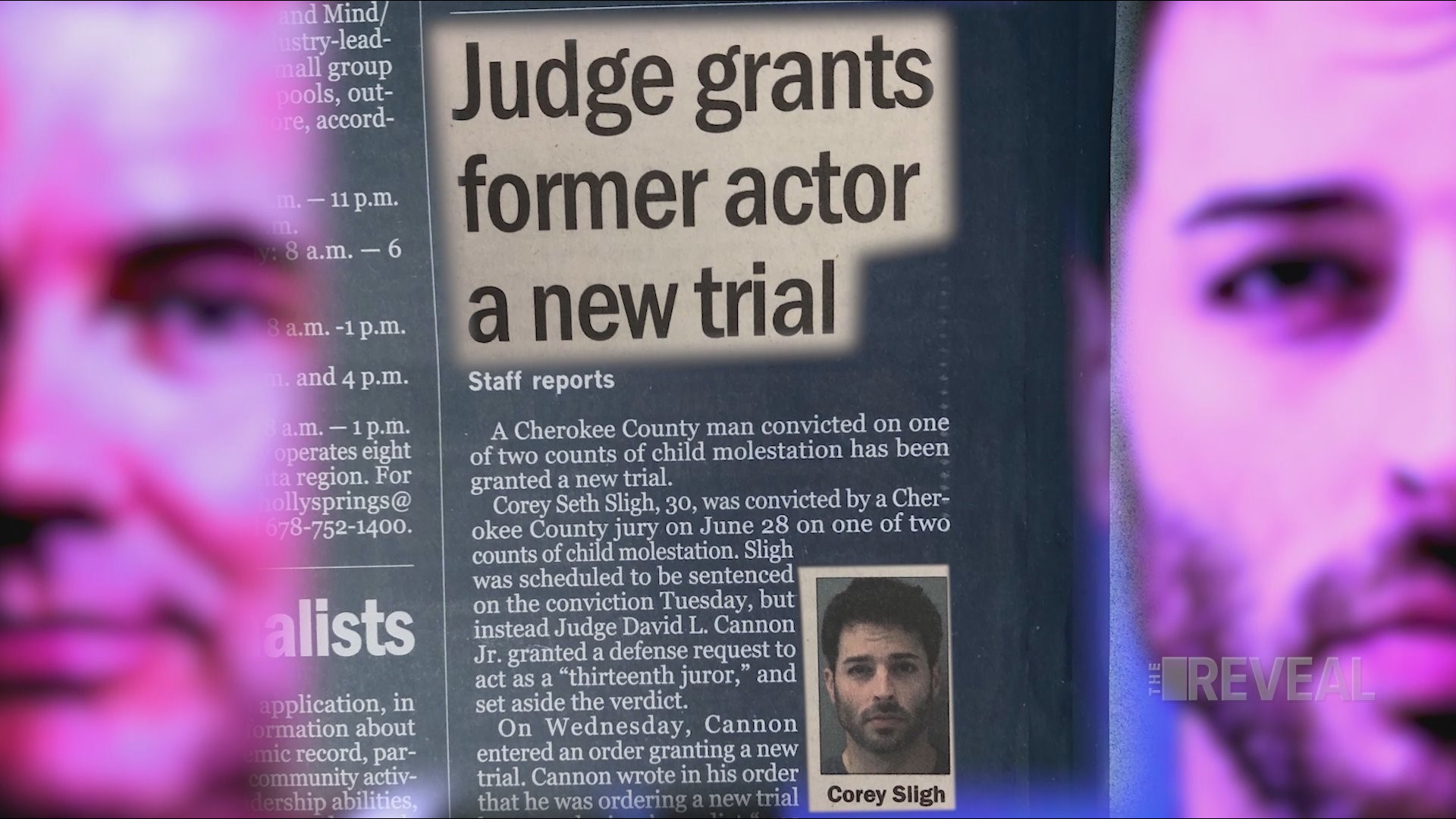 CHEROKEE COUNTY, Ga. — A convicted child molester could get another chance at freedom after a Cherokee County judge said he made a mistake during the trial.

Corey Sligh, a 31-year-old former actor, who landed himself roles on "The Young and the Restless" and the sitcom "All About Lizzie," was charged with two counts of child molestation in 2016.

About two years later, a jury convicted him on one of those charges, which carries five to 20 years behind bars. Instead of sentencing Sligh to prison, Superior Court Judge David Cannon granted his own motion for a new trial this past September. Hours later, Sligh bonded out of jail and remains so today.

Reaction to the judge’s action was swift and mostly critical -- especially from the victim’s parents, the district attorney, law enforcement and even the jury foreman.

The alleged victim was 7-years-old at the time of the incident. She claimed the molestation happened at least two different times when she was alone with Sligh – once in Florida and another time in the basement of a Cherokee County home.

At the time of the arrest, Sligh was on his way to making a name for himself in Hollywood. At 29-years-old, he landed himself roles on "The Young and the Restless", a movie called "God is Dead" and the sitcom, "All about Lizzie."

Those acting dreams came to a sudden halt after Cherokee County detectives asked Sligh to come in for questioning in October 2016.

“He was like, ‘What do you need to know?’ And the police officer says pretty early on, the detective says, ‘child molestation.’ And the look on Corey’s face is just utter dumbstruck shock,” Frye said.

About two years later, jurors listened to defense attorneys and prosecutors argue over essentially two pieces of evidence – a video of the minor interviewed by a counselor and another video of Sligh interrogated by police, both explaining their stories about what happened.

When it was time for the jury to deliberate, it was not a quick decision. On three separate occasions, the jury returned to Judge Cannon without a verdict.

Marc Nolan was the jury foreman in the case.

“When we came out, I said, ‘We’re all deadlocked, right? No one is going to change their mind?’ I think it was eight to three or seven to four at that time,” Nolan said. Under Georgia law, convictions must be determined by a unanimous jury vote.

After the third deadlock, Nolan sent Judge Cannon a note on behalf of his fellow jurors.

“I basically asked, ‘How long can you keep us here?’ And he came back and said, ‘Oh, Mr. Nolan, you don’t want to know I can keep you here,’” explained Nolan.

Judge Cannon ordered the jurors back to deliberate again, giving them the ‘Allen charge,’ which is an instruction to deadlocked jurors to try and reach a verdict. Judges often use this type of charge to reduce the risk of a mistrial happening.

►OTHER NEWS | Sophie's Nightmare: How a Georgia mother allowed her boyfriend to impregnate her 10-year-old

This time, the jurors had a request. They wanted to watch the videotaped interviews of the little girl and Sligh’s interrogation by themselves.

Nolan said that gave him and his fellow jurors the ability to watch the tapes on their own time, instead of the state and defense attorney telling them what they should be watching for in the interviews.

“The judge was gone, the attorneys were gone…it was just us having the ability to play the tape back and forth. We all heard exactly what he said, that matched what the young girl [said],” said Nolan.

Within a short time, Nolan said it was clear to he and his fellow jurors that Sligh’s interview confirmed the girl’s claims.

A short time later, they voted to convict Sligh of child molestation.

About two months after the conviction, Sligh returned to the Cherokee County Courthouse - facing 5 to 20 years behind bars. At the hearing, court transcripts show Judge Cannon surprised everyone.

Instead of telling Sligh how long he’d spend in prison, Judge Cannon announced he was going to grant a motion for a new trial. He said he was doing it because he made a mistake.

“The jury came to me three times and asked me to let them off this case and I said no,” said Cannon, according to court transcripts of the judge. “I had a knot in my stomach for about a week after this trial.”

It’s 11Alive’s policy not to identify sexual assault victims, but the child’s parents agreed to speak with the condition of anonymity.

The girl's parents also refute claims they ever caught their daughter watching pornography.

► OTHER NEWS | Early Release, Early Death: 'That's not the way he deserved to die'

“Three days of deliberating? To me, all that says is that the jury took their time and wanted to do the right thing, which was their job,” said Wallace.

Sligh’s legal team says the judge made the right move.

"Oh my god it was such relief," said Frye. "I told [Sligh] it was essentially like hitting a grand slam at the end of the World Series. I said this is a very small window, but I think it’s appropriate here."

The day after Judge Cannon ordered a new trial, the jury foreman posted a message on the judge’s official Facebook page: “Your ‘Honor’ Just heard what you did yesterday. All I can say is, it’s a disgrace! Kangaroo Court Cannon should be your new nickname.”

Nolan thinks Cannon, an elective official, should resign because he believes the judge put his feelings above of the law.

"This isn’t about your feelings pal. We weren’t allowed to have feelings. [Cannon] admonished us on several occupations, you can only go with the facts," Nolan said.

Nolan has filed an official complaint against Judge Cannon with the Judicial Qualifications Commission, which investigates complaints of ethical misconduct by Georgia judges.

The district attorney’s office filed a motion requesting Cannon recuse himself from the case, but the judge refused.

Judge Cannon declined interview requests for this story, but he did respond to the jury foreman’s post, writing, "I determined in retrospect I should have granted your request for a hung jury." Cannon also posted that he believed ordering the jury back to deliberate "coerced you into a verdict." The judge later deleted his post.

While rare for a judge to order a new trial after a jury conviction, Frye believes Cannon made the right decision by recognizing his mistake.

"Because they felt like they were never going to be able to leave without a verdict…that’s not the law, that’s not what fairness demands," said Frye.

This isn’t the first time someone has criticized Judge Cannon’s actions related to a child molestation case.

Despite objections from the district attorney’s office, Judge Cannon signed a bond order last year allowing Ellis to go to a Florida resort called "Give Kids the World Village", which provides free tickets to Disney, Universal Studios and SeaWorld.

“It’s the State’s understanding that the Defendant wants to travel to Disney World with this family without the ankle monitor on his person. The State vehemently opposed to the Defendant traveling to Disney World while on bond for these charges,” wrote assistant district attorney Jennifer Geller in a motion to revoke Ellis’ bond.

In the motion, Geller sites multiple times when Ellis was found violating his bond conditions by traveling to locations he was not approved to visit.

In October 2018, Cannon signed a bond modification order allowing Ellis to attend the theme park with his family that read, “The defendant shall have no unsupervised contact with any minor children and all other terms and conditions of the defendant’s original bond order shall remain in full effect.”

Ellis’ attorney did not respond for interview requests. Ellis’ trial could start sometime in February.

The Cherokee County District Attorney’s office is in the process of appealing the judge’s decision in Sligh's case, to the Georgia Court of Appeals.

If the court of appeals agrees a new trial should continue, it could take another two years for it to happen.

That’s a long time for a little girl seeking justice or for the accused to prove his innocence.