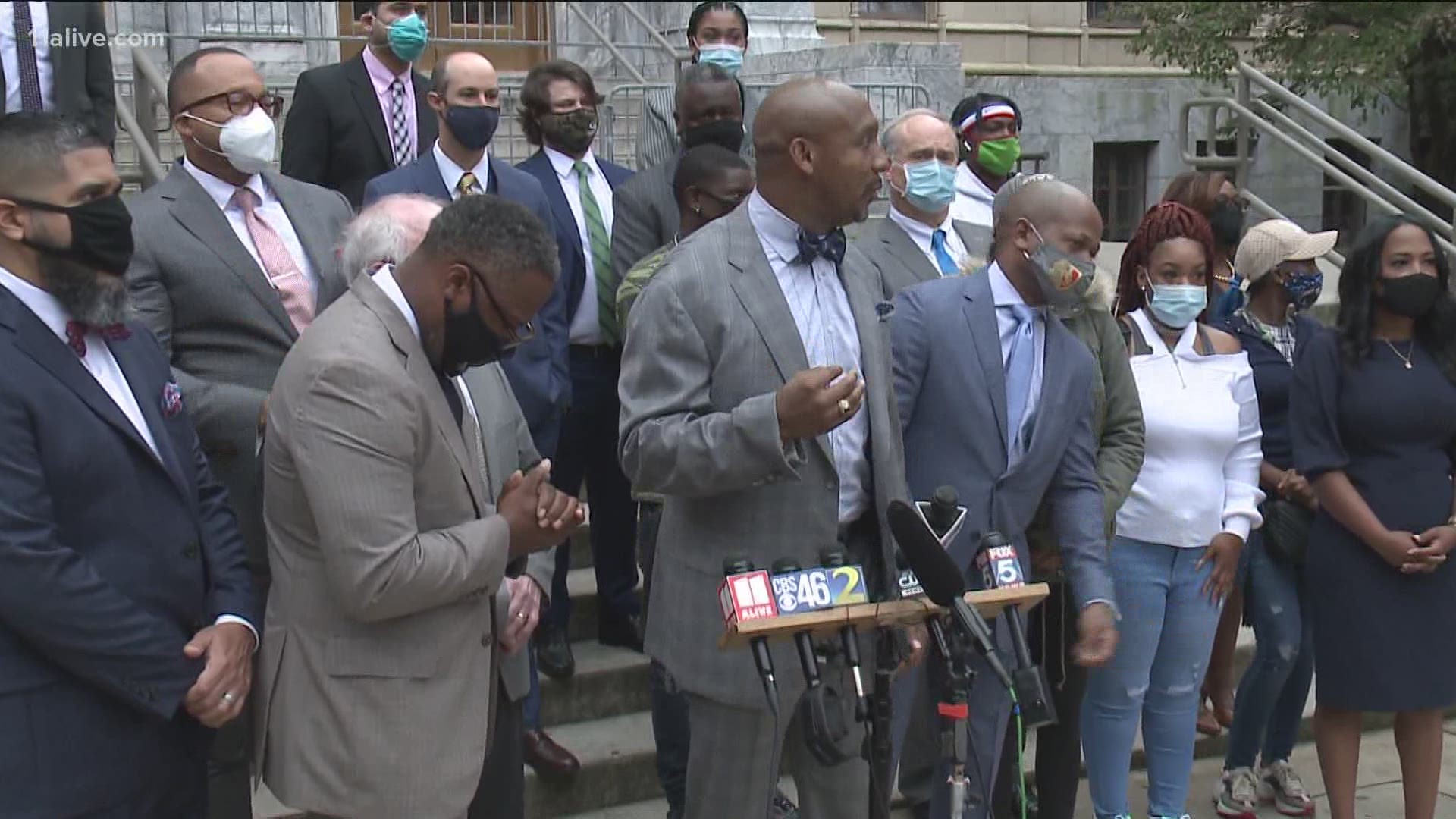 ATLANTA — On the steps outside of Atlanta City Hall, a crowd of Atlanta-based attorneys gathered Monday representing individuals injured during violent arrests, and the families of people killed by Atlanta officers.

The attorneys said often the families will receive public support from the mayor's office or other elected city officials following a case of police brutality, but the tone changes when the parties enter the courtroom.

"What we have seen is city councilmembers marching in protest, we've seen elected officials coming to funerals but what we have not seen is justice for these clients," attorney Mawuli Davis said.

During Monday's news conference, the case of Caine Rogers was discussed.

Rogers was shot and killed in 2016, by then APD Officer James Burns. The city of Atlanta fired Burns following the shooting, but attorneys for the Rogers claim the city has delayed a wrongful death lawsuit filed against the city.

Attorneys argued the problem is a result of the city not insuring its officers, which would assist in paying large settlements following cases of police brutality.

A city spokesman sent 11Alive the following statement in response: While the City does not comment on pending claims or litigation, it is important to correct the record on the City’s practices regarding insurance coverage and the representation of City employees. For the past several decades, the City has been self-insured, including the City’s vehicles. If the City used private insurance coverage, it is doubtful that coverage would include police officers who have acted outside of City policies. City employees, including police officers, are represented by the City if they are sued as a result of actions taken in the course of their employment.

Attorneys said as they wait years in some cases to reach settlements, other cities are able to resolve civil lawsuits in a matter of months.

Recently the city of Louisville agreed to pay Breonna Taylor's family $12 million after she was killed during a raid in March involving Louisville police officers.

"Breonna Taylor's family has already gotten some justice," attorney Shean Williams said. "We've got families here that have been years waiting for the city of Atlanta to step up."

"A lot of cities now after George Floyd are trying to push to insure their officers and have liability coverage," attorney Chris Stewart said. "How are we not leading that charge? Don't let the city attorney come back and say, 'oh everyone will start suing.' We are already suing."

In 2006, 92-year-old Kathryn Johnston was shot and killed when Atlanta officers mistakenly served a no-knock warrant at her home. Williams said he represented Johnston's family. He said it took four years to reach a $4.9 million settlement with the city, but then they needed to continue to wait to be paid.

"That settlement came out of the taxpayer's money," Williams said. "They didn't have insurance, they had to pay me over time because we don't have a place for that."