After lying in honor at the Capitol, his casket moved across Capitol grounds, before a procession that stopped at significant landmarks for the civil rights hero. 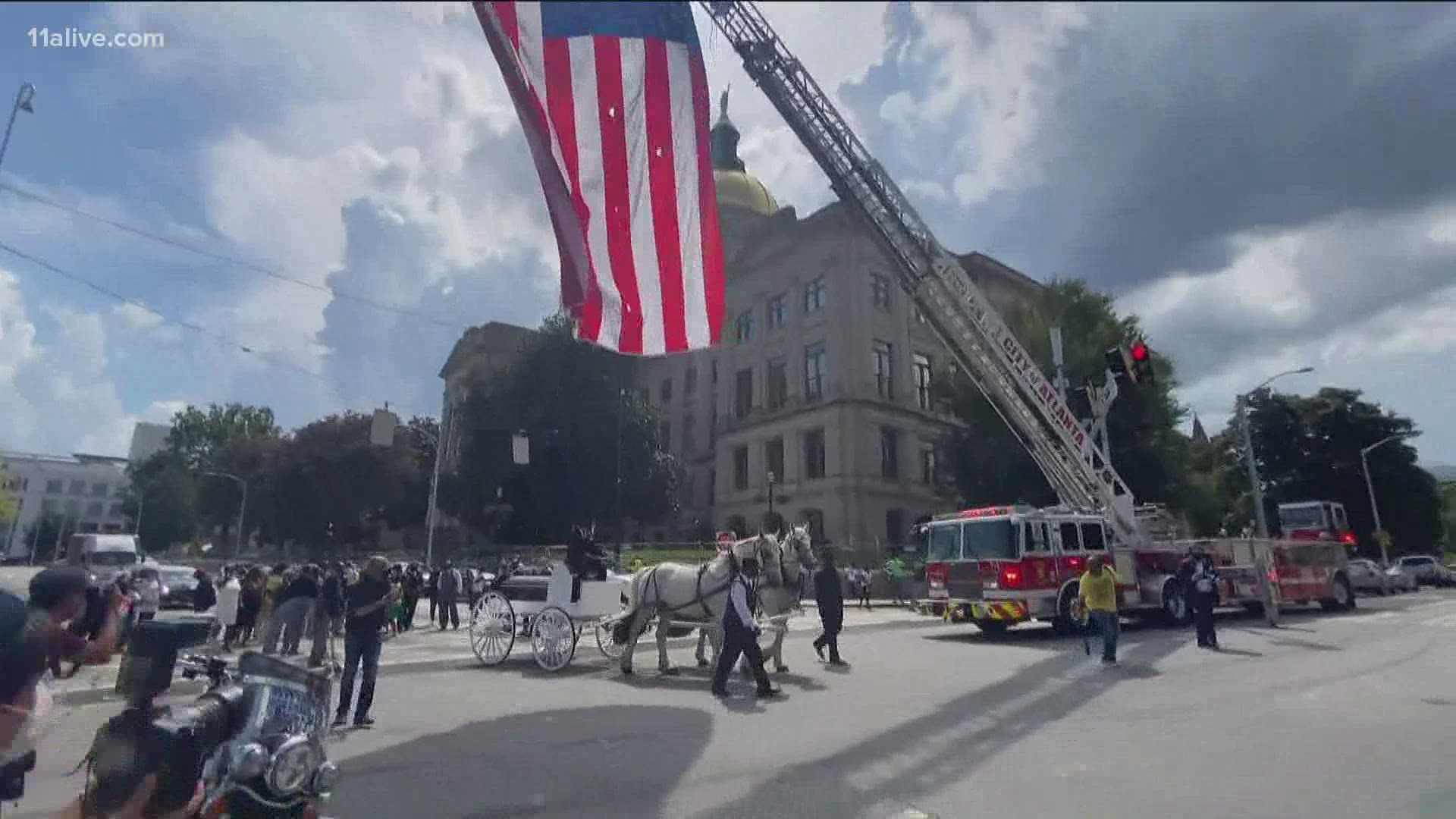 ATLANTA — UPDATE:  Rev. Vivian was lying in tribute at the state Capitol until 3 p.m. A brief service was held that included remarks by Gov. Brian Kemp and his son, Alvin Vivian, earlier.

The casket then moved across Capitol grounds to a horse-drawn open carriage, before a procession that made stops at significant landmarks for the civil rights hero.

Re-watch the memorial below.

The Rev. C.T. Vivian will lie in honor today at the Georgia State Capitol. Vivian died at the age of 95 last week at his Atlanta home.

According to an advisory sent to 11Alive, his casket is expected to leave the Willie Watkins Funeral Home at 11:15 a.m. Wednesday. Once his body arrives at the Capitol it will be moved into the rotunda.

The family is expected to be greeted by Gov. Brian Kemp in his office and will be escorted to the casket at noon; remarks will also be given.

1 / 11
AP
Mourners sit in the capitol rotunda around the casket of The Rev. C.T. Vivian for his memorial service, Wednesday, July 22, 2020, in Atlanta. Rev. Vivian, an early and key adviser to the Rev. Martin Luther King Jr. who organized pivotal civil rights campaigns and spent decades advocating for justice and equality, died Friday at the age of 95. (AP Photo/John Bazemore)

The casket will then be moved across Capitol grounds to a horse-drawn open carriage. They plan to make stops, including one in front of the Southern Christian Leadership Conference National Office on Auburn Avenue and The Martin Luther King Jr. National Historic Park.

Vivian was celebrated for his pivotal work during the Civil Rights Movement. He was most noted for his work with the SCLC, participating with the Freedom Riders and, famously, a widely televised incident in which he was punched by the notorious segregationist sheriff Jim Clark in Selma, Ala. in 1965.

Described by the C.T. Vivian Leadership Institute as a "spiritual leader, apostle of social justice, and strategist of the Civil Rights Movement," for decades he was "in the vanguard of the struggle for racial equality in America."

He was awarded the Presidential Medal of Freedom by President Barack Obama in 2013 for his leadership during the Civil Rights Movement.

Martin Luther King called him the "greatest preacher whoever lived.”

Funeral for the Rev. C.T. Vivian set for Thursday