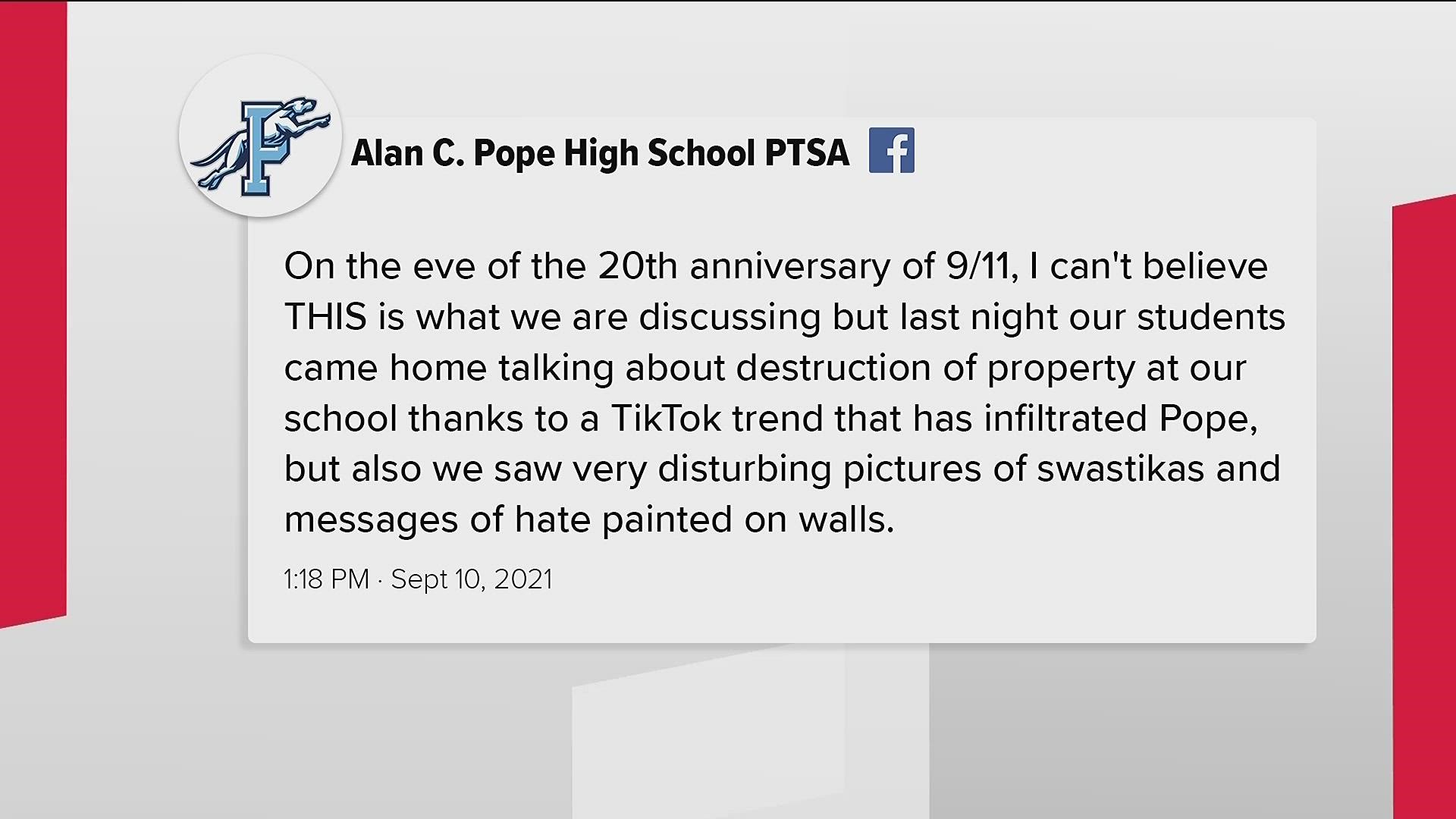 According to a parent, the teacher and student association posted about the graffiti on Facebook.

The post stated, "On the eve of the 20th anniversary of 9/11, I can't believe THIS is what we are discussing but last night our students came home talking about destruction of property at our school thanks to a TikTok trend that has infiltrated Pope, but also we saw very disturbing pictures of swastikas and  messages of hate painted on walls."

The post continued, "Many will call these teenage pranks, but these are hate crimes– and destroying property and stealing from your school is a felony."

A district spokesperson issued a statement Tuesday about the defacement and the school's disciplinary actions.

"Anytime students misbehave, and in this case disrespect, individual students, people groups, and their school, we find it unacceptable. The principal has engaged with community groups who have been affected by this student behavior, and all applicable District policy and law will be applied."

11Alive also obtained of copy of the letter that Pope High School sent out to parents and students in response to the bathrooms being defaced.

"As you may be aware, this week, I have spoken to and been meeting with concerned students, parents, and community members about an incident that unfolded this week on our campus.

Several students have defaced our beautiful school with hateful graffiti and also damaged our facilities. As we investigate, I want to assure you that we will hold those responsible accountable to our district policies and applicable state laws."

The school's principal also addressed the defacement specifically and said it will not be tolerated.

"The Cobb County School District is one of the most diverse school districts in the nation. We enjoy a wide variety of racial, ethnic, religious, and cultural diversity among our population. At Pope High School, we are proud to be a welcoming, safe, and considerate community for all of our students. Disturbing acts like what occurred this week have no place in our district or at our school and will not be tolerated."

"My heart is breaking as I write this letter to you. I spent all morning and early afternoon at Pope High School responding to an act of Antisemitism and vandalism which took place yesterday. Along with other acts of destruction in the school building, swastikas and the words “Heil Hitler” were written on the bathroom walls."

Rabbi Sernovitz  met with Pope High School's principal and the student body at the end of each lunch period Friday.

According to Rabbi Sernovitz's letter, several students who defaced the bathrooms have been identified.

"There will be follow-up and the encouragement of initiatives to teach the Pope community how to be an ally and speak up against hatred and intolerance," Rabbi Sernovitz wrote.