Refresh this page for updates from across the state all day long. 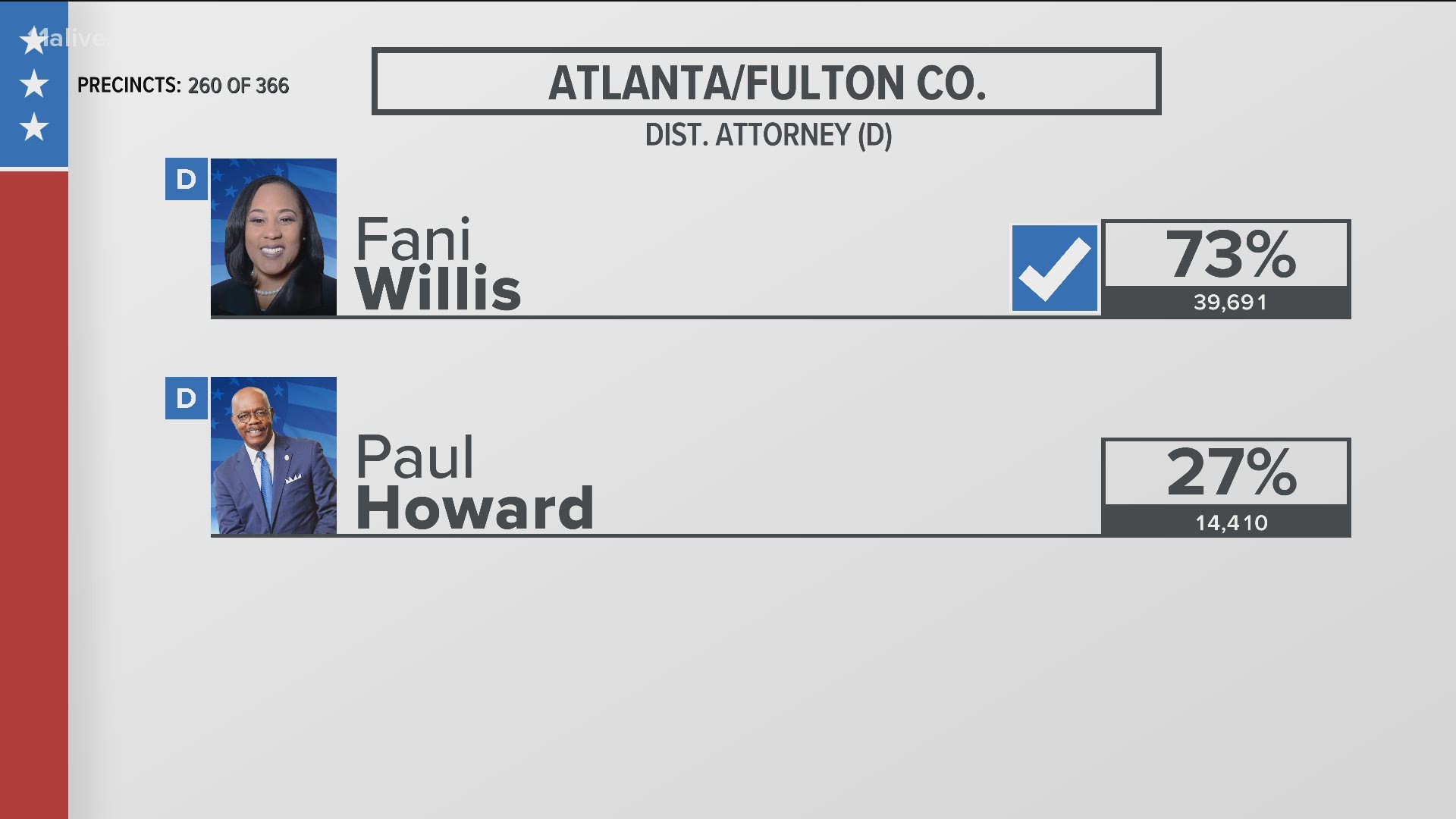 There are races in 94 of the state's 159 counties being contested.

The Georgia Secretary of State's office worked together with boards of elections in each of the counties to avoid the problems and long lines that plagued some voters and precincts during the June 9 primary election.

Our reporters didn't notice any significant lines at any of the precincts that we surveyed Tuesday afternoon.

Refresh this page throughout the day for the latest updates:

10:40 pm | Here's a video of both, Fani Willis and Paul Howard speaking about the Fulton County DA runoff race.

Fani Willis tears up as early results show she unseated Paul Howard for Fulton County DA. She could be the first black female DA in the county’s history #11alive pic.twitter.com/IUNsKMOvjK

7:30 pm | Results are starting to come in for some runoff races. Click here to view them.

5:05 pm | Secretary of State Brad Raffensperger tweets that there are only a few hours left for people to go vote or drop off absentee ballots.

Only a few hours left to vote, either in person or by dropping your absentee ballot off in a drop box or the local registrar, before polls close at 7pm. Check https://t.co/HKys3QWUIX for designated voting locations or check county elections websites for drop off box locations pic.twitter.com/zo47xXEQdR

2:45 pm | A DeKalb County voter says she ended up waiting about two hours before she was able to cast her ballot at Israel Baptist Church early Tuesday morning.

Whether it’s by mail or in person with a mask, go vote in the runoff election 🇺🇸 pic.twitter.com/b0wt6bsWdn

1:05 pm | NBC's Blayne Alexander is at a precinct in Atlanta's Central Park. She says in June at that precinct, she spoke with voters who had waited more than four hours to vote.

Things are much different today, she says.

In June, I talked to voters at this polling location who waited 4+ hours to cast a ballot.

Things are much different today: pic.twitter.com/RXVj0ORpP5

11:30 am | 11Alive's Nick Sturdivant has visited the precinct at Park Tavern next to Piedmont Park in Midtown Atlanta and notes that there are no lines there.

He does point out that ten polling places in Fulton County have been changed. As a result, voters should check the Georgia Secretary of State's My Voter Page before venturing out to ensure that they are going to the proper location to vote.

UPDATE: No line here. Fulton Co. told me no reported issues so far. But 10 polling places have changed & voters should check the GA My Voter Page to verify. #11Alive pic.twitter.com/iUjx8v6hxJ

11:25 am | Civic leaders in Rome are encouraging local residents to get out and vote.

Have you voted in today's runoff election yet? pic.twitter.com/XTIrabH2yb

9:50 am | Fulton County Commission Chairman Robb Pitts has visited his polling place to cast his vote in the runoff election and encourages everyone to get out and vote.

Chairman Pitts has cast his ballot in today's primary runoff. If you haven’t yet, be sure to head out and vote. Polls are open & will remain open until 7 pm. Before heading to the polls, please verify your voting location at https://t.co/XKh37X3gPP. #FultonVotes pic.twitter.com/zSUZHlmaS7

8:54 am | This is the southeast branch in Fulton County this morning. For the June primary, the line at this precinct was four hours long.

Credit: WXIA
No lines at the southeast Fulton County branch this morning. For the June election, the line here was four hours long.

Credit: WXIA
No lines at the southeast Fulton County branch this morning. For the June election, the line here was four hours long.

7:50 am | One of the big races being contested today in metro Atlanta is for Fulton County District Attorney.

Longtime Fulton Co. District Attorney VS. Ex-Fulton Asst. D.A. This is one of the big races to watch in GA’s Primary Runoff Election today. Paul Howard has been D.A. since 1997 + garnered only 35% of the vote in the June primary. Fani Willis won 42% of the vote #MorningRushATL pic.twitter.com/5ZRNF4txgl

7 am | The polls are open across the state of Georgia

The polls are open. No lines here at Park Tavern near Piedmont Park. #11Alive pic.twitter.com/yigRyAdnOT

Later this evening, we will have the latest and most up-to-date election returns as the votes are counted through the evening.