Verify: Are there really six donuts in a soda?

Drinking donuts? A viral tweet floating online is bringing up health claims about how much sugar we're consuming in soda and other drinks 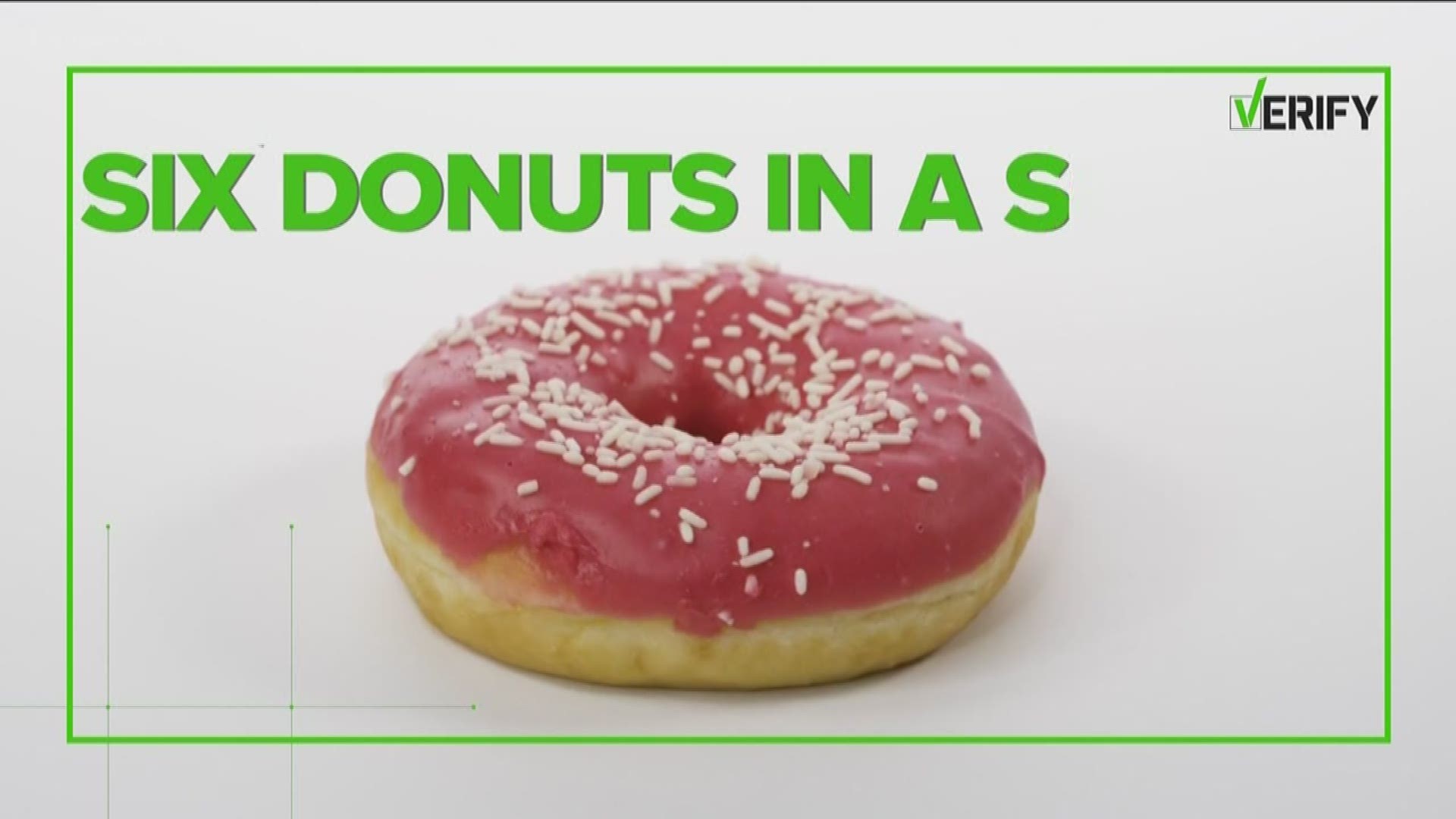 ATLANTA — Drinking donuts? A viral tweet floating online is bringing up health claims about how much sugar we're consuming in soda and other drinks, giving us food for thought.

Six donuts in a soda...does the math add up?

To verify, we started with the first image, indicating 65 grams of sugar in a 20 oz. soda. According to published nutrition data, that's the verified sugar content in a 20 oz. classic Coca-Cola.

Based off of the tweeted photo, we turned to a popular donut chain for reference.

A Krispy Kreme strawberry iced donut with sprinkles equals 11 grams of sugar. If you multiply that by six, that accounts for 66 grams of sugar, and give or take a gram six of those donuts do equal a 20 oz. classic Coke.

However, those metrics are based on two specific brands so 11Alive reached out to Dr. Emma Laing, Clinical Associate Professor at the University of Georgia's Department of Foods and Nutrition, for clarification.

"The graphic posted on Twitter was meant to show that one 20-oz bottle of soda contains about the same sugar content as 6 average-sized doughnuts. Calling attention to the fact that Americans tend to over-consume added sugars might be effective; however, the message in the infographic is oversimplified," Dr. Laing said. "The calorie and nutrient content of doughnuts can vary widely and so does the nutritional content of fruit juices and sugar-sweetened beverages."

While the graphic can be verified with select drinks and donuts, it's not one size fits all, and if you're looking to skip the drink and down donuts instead. Dr. Laing says this should not be considered an equal exchange because of factors like saturated fat and sodium.

"The bottom line is that though the sugar content might be similar, eating donuts is not technically healthier than drinking a bottle of soda," Dr. Laing said.

"A key message from the Dietary Guidelines for Americans is that everything we eat and drink over time matters. This does not mean that you can't enjoy an occasional doughnut or soda if you eat an overall balanced diet that is appropriate for your calorie needs, which are primarily based on your age and physical activity level. If you choose to consume foods and drinks with added sugars, opt for smaller portions or consume them less often. What is most important is that your typical eating pattern focuses on consuming nutrient-dense foods, such as whole fruits and vegetables, whole grains, low-fat or non-fat dairy, and lean proteins.

The federal Dietary Guidelines for Americans recommends "limiting calories from added sugars to no more than 10% each day." That percentage accounts for 200 calories for a 2,000 calorie diet, according to the guidelines.

11Alive reached out to Coca-Cola and Krispy Kreme for the companies' response regarding the viral post.

"We agree too much sugar isn't good for anyone, and that is why we are taking actions around the world to help people drink less sugar from our beverages,"  a Coca-Cola spokesperson responded in an email.