Atlanta isn't really a city that experiences many snow storms. Winter weather in the city is generally mild and tolerable. However there have been times in winter's past where Atlanta experienced storms and blizzards that caused havoc and mayhem, especially when it came to traffic. 11 Alive is taking you back in time to some of the worst winters in Georgia history. 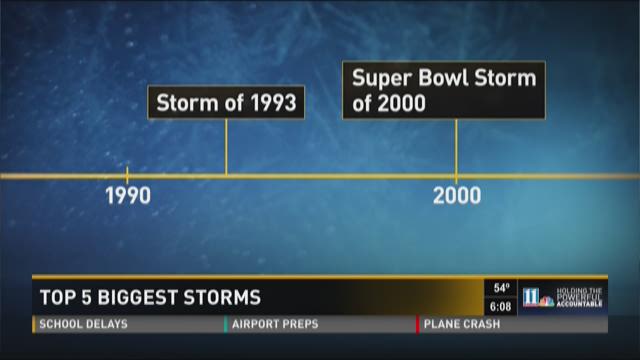 Atlanta isn't really a city that experiences many snow storms. Winter weather in the city is generally mild and tolerable. However there have been times in winter's past where Atlanta experienced storms and blizzards that caused havoc and mayhem, especially when it came to traffic. 11 Alive is taking you back in time to some of the worst winters in Georgia history.

Georgia received four inches of snow during the 1982 Snow Jam. The winter storm left thousands of people stranded at work and on the roads and highways. People were forced to abandon their cars along I-285 and I-75 and walk home or seek shelter. What made the Snow Jam go down in history is not only how it brought the city of Atlanta to a complete standstill, but that it lasted for several days.

Also known as the ‘Storm of the Century’, this deadly snow storm unexpectedly hit Atlanta out of almost nowhere. Fifteen people lost their lives in Georgia during the storm and that number jumped to three-hundred nationwide. The storm occurred on March 13, 1993 and brought three feet of snow to North Georgia and over four inches throughout the city of Atlanta. What’s crazy about it all? Just three days prior the weather in Georgia was in the high 70s, low 80s. The blizzard left thousands of motorist stranded on I-75 up to the following Monday and more than half a million Georgia Power customers without power for up to two weeks.

The Super Bowl ice storm brought horrible weather to Georgia at one of the worst times. The storm first took place on January 22, 2000, a week before Super Bowl 34 at the Georgia Dome. It left half a million people without power in North Georgia, some for more than a week. The storm then returned on January 28 during Super Bowl weekend. Although the game itself wasn’t necessarily affected, there were hundreds of wrecks in metro Atlanta including a 47-car wreck on I-20 westbound. North Georgia had an estimated $48 million of total losses.

Another Blizzard hit the city of Atlanta on January 9th in 2011. The city was blanketed with almost four inches of snow which led to mayhem. There were so many accidents that occurred during the blizzard that police stopped responding to ones that didn’t involve injuries. Additionally, fifteen miles of I-285 remained closed as truckers were stranded on the highways and slept in their trucks. Thousands of flights were canceled and people even opted to spend the night in Hartsfield – Jackson Airport rather than risk being stranded on the wintry roads.

Atlanta experienced deja vu on January 28, 2014 with yet another snow jam. Although the city only received 2.6 inches of snow, cars were stranded on all three highways for up to a day. Over a million people were jammed on the major highways in Atlanta primarily because everyone in the city was attempting to head home out of the snow at the exact same time. Ninety-nine school buses from Fulton County schools were stuck in the traffic until midnight while 2,000 students were forced to spend the night at school. Hundreds of people were forced to abandon their cars on the interstate and seek shelter in nearby stores such as Kroger, Home Depot and CVS. One good thing that came out of the jam however was that a father successfully delivered his baby girl that day in his car on I-285.

1 / 15
Putting hand sanitizer on your keys can help you get through an icy lock.