She joined Democratic candidate for president to talk about expanding voting rights, and what the election means for correcting systemic racism exposed in the US. 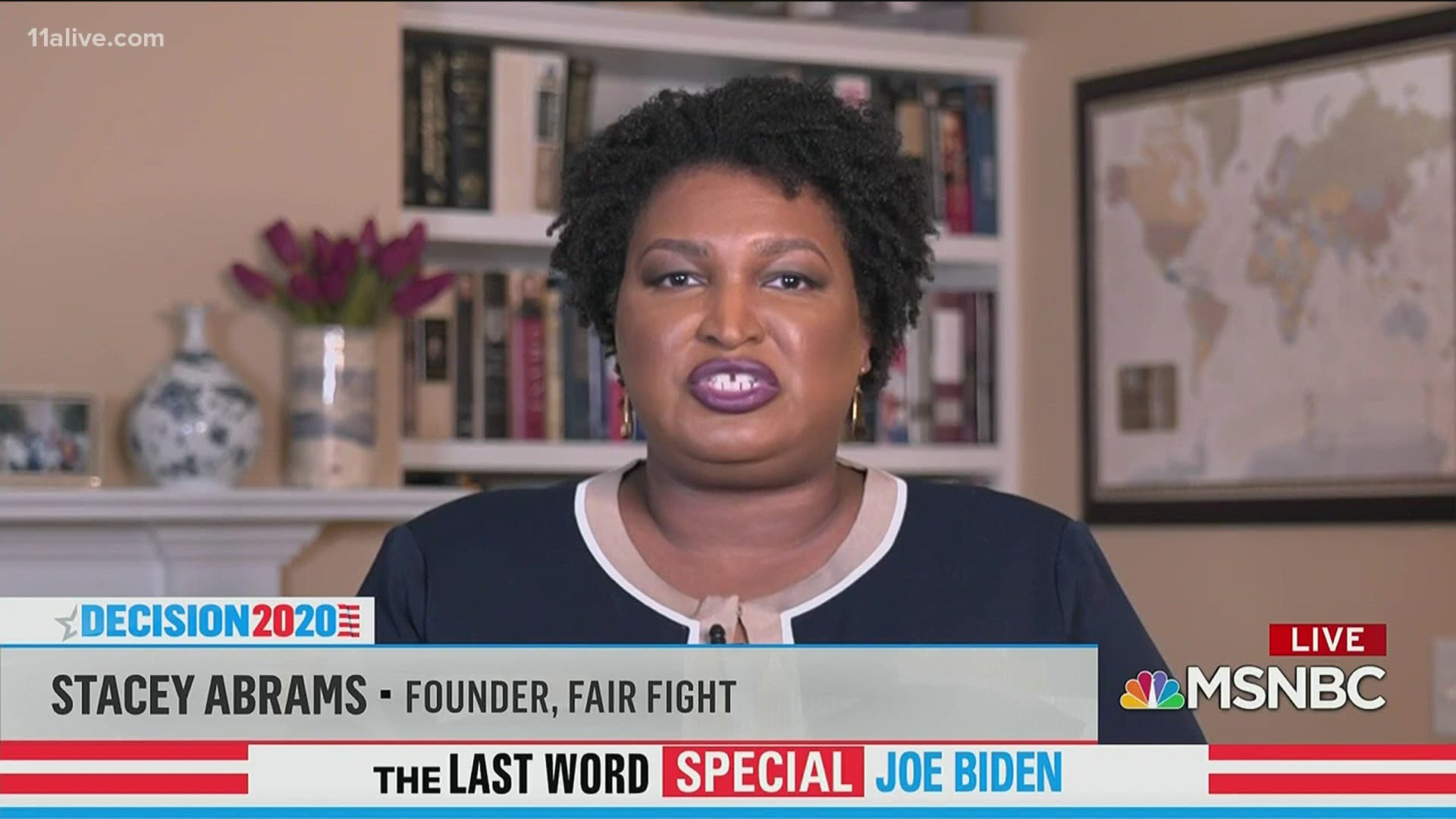 ATLANTA — While most of the nation's attention is trained to the unfolding coronavirus pandemic, Democrats are still campaigning hard to take back the White House come November.

Abrams, whose name has been floated during the campaign cycle as a possible vice presidential nominee, appeared with Biden to take questions from voters during "The Last Word with Lawrence O'Donnell." But before they did, they took a moment to get the elephant in the room out of the way: whether Biden was prepared to make an "announcement."

"Stacey Abrams has done more to deal with the fair vote than anybody," Biden lauded, praising her work with Fair Fight, an organization that works to expand voting rights. "She knows what she's doing and she is an incredibly capable person."

Abrams created the Fair Fight organization after her failed bid for Georgia's governor's office in 2018, which she said she lost as a result of voter suppression by then-Secretary of State and now-Gov. Brian Kemp.

Abrams joined Biden for the back half of the hour-long conversation, during which the pair touched on several topics, including voting rights, the the pandemic, the unfolding investigation into the murder of Ahmaud Arbery - and how they are all interconnected.

Abrams said there is no issue more important to the November election than protecting the right to vote, including expanding access to mail-in and absentee ballots during this pandemic - a move widely unpopular with Republican members of Congress and President Trump himself.

Biden called out the President for saying out loud that he is against expanding access to mail-in and absentee voting and sending much-needed funding to the United States Postal Service, which could play a pivotal role in the election if the pandemic drags on into November.

"Whether you're thinking about what happened in Georgia in 2018 (during the governor's election) or Wisconsin (with voters standing in line during the pandemic) ... we know vote-by-mail is safest and most accessible way of making sure that every American can have their voice heard," Abrams said. "(Republicans) don't want the voices of the people suffering ... they don't want their voices heard at the ballot."

Biden said the upcoming election holds even more importance because the "soul of America" is at risk. He said during this time - which has seen more black Americans killed by Covid-19, a higher number of minorities working on the frontlines as essential workers and two high profile shootings of unarmed black people - the "blinders were taken off" of many Americans during the pandemic, which he said exposed the systemic racial issues plaguing the country.

"Good people who hadn't focused on this before are all of a sudden saying, 'my God, I had no idea of how deep this institutional racism runs'," Biden said.

"Look at all the people who are working out there breaking their necks to save all the rest of us," Biden added. "They are minority or are making minimum wage ... and I think they are all ready to say to say 'enough.' I think we genuinely have an opportunity to deal with that institutional racism ... and they are ready to respond."

Abrams said voting is one way to do that.

"Only in America, is jogging in 2020 while black and sleeping while black a cause for killing," Abrams said. "Our ability to vote is exactly how to solve one of the challenges that the Vice President (Biden) lifts up - we have to have the ability to elect district attorneys who actually respect our people, that we can elect people as our sheriffs that actually execute laws properly."

"That is what we have to take to the voting booth in November and into the presidency and into the White House in January," she concluded.

Coronavirus whistleblower warns Congress that US lacks plan for vaccine