Community activists criticized the officer for drawing his weapon on the group of teens, who were all under the age of 15. 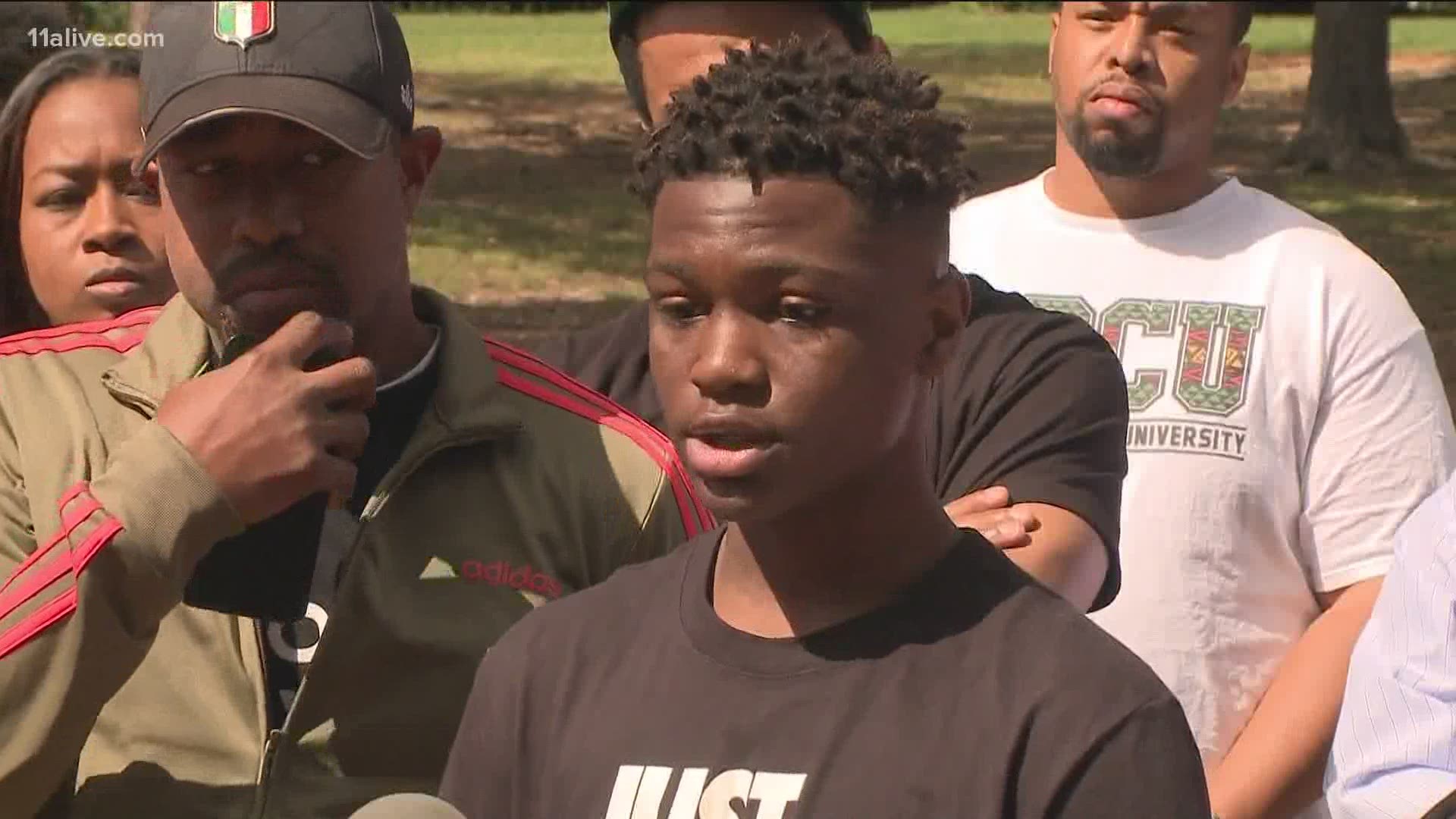 CLAYTON COUNTY, Ga. — Police have released the body camera video from an officer involved in a stop of a group of teens at gunpoint that has drawn fierce criticism from the community.

The encounter, which has led to calls for the officer's firing, happened Monday evening off Taylor Road, near Flint River Road. Community activists, including rapper T.I., criticized the officer for drawing his weapon on the group of teens, who were all under the age of 15.

The video, which was provided by the Clayton County Police Department, begins with the officer in his car, after responding to 911 dispatch's reports of armed teens walking from a convenience store.

The officer first stops at the store parking lot, before being pointed into the direction that they left. After driving a little way, the officer finds the group and gets out of the patrol car with his weapon drawn.

"Stop! All of y'all stop!" the officer shouts. "Get your hands up! Up! Walk toward me."

"Get your hands up or you're going to get hurt," the officer commands.

"Now, listen to me, so you don't get hurt!" the officer says, before giving repeated commands. "Don't move."

The officer, who is standing away from the teens, tries to ease the tension.

"Please. I don't want to hurt one of y'all," the officer says before radioing his location and relaying the situation.

"Young man, don't move!" the officer shouts, as the group asks for whoever is moving to stop..

"What just happened at the store, guys?" the officer asks, before the group starts talking over each other.

The teens said they didn't do anything.

"Why does the guy think one of you has a gun?" the officer asks. The answer from the teens is unclear, but the officer responds with, "Okay, then we good."

Right after that, one of the teens starts moving, causing the officer to get tense again and repeat, "don't move." The group again asks for whoever is moving to stop, as the officer tries to assure them, "We chillin' right now."

In the next moment the officer asks for "a 73" because of the crowd beginning to gather to see what is happening.

The scene is quiet for a few moments before the officer tells the teens, "relax, guys. Don't worry about them," presumably referring to the crowd.

The officer still does have his weapon drawn and raised, though it does not appear to be pointed directly at anyone.

"You ain't got nothing to do with this," the officer says loudly to the people gathered, as people in the background begin to shout for him to leave them alone.

The officer turns his attention back to the teens, saying, "guys, y'all know what's going on right? Don't let this get y'all involved, all right?"

"We've had a good conversation. Don't pay no attention to the crowd, alright?" he continues. "Y'all just relax, alright? Y'all know why I'm here."

"Yeah," one of the teens responds.

At this point, someone in the crowd speaks to the officer, but it's unclear what was said.

"I'm not superman. I can't see thru their clothes," the officer responds.

"I'm not checking for myself, guys. I'm one against five," he replies again.

In an earlier video posted on social media, someone asks why the officer still has his gun out.

He replies with, "Because I'm being safe."

He again turns back to the teens to ask them to continue to stay calm.

When the officer's backup arrives. He asks the teens to turn around, so that they can check for weapons.

"So here's why we're here," the officer begins before asking the group what happened inside the store.

The teens said they were inside before walking out and "play fighting." In the video, the officer asks for them to walk with him back over to the store.

"All that stuff that they're doing, I'm not worried about that," the officer says to them, referring to the crowd.

The officer then gets inside his car to drive over to the store. During this time, he engages with some people in the crowd, and shouts out that they don't know the full background of what's happening.

When the officer gets into the lot of the store, he asks the teens to accompany him inside to find out what happened.

"The clerk called. Thought one of you had a gun, okay? That's where we're at," he explains. "I have to get everybody's information because I had to pull my weapon out to stay safe."

"None of y'all got hurt. Y'all understand what was happening, right" the officer adds.

"It's five of y'all and it's one of me. Nobody got hut. Y'all listened to me. That's great," the officer continues before saying. "I don't wanna die either, y'all. There's a lot that's going on out here.

The officer says that it only got "extra" when the crowd of onlookers began to show up.

The officer then asks why the clerk thought they had a gun, and the teens said they had a BB gun.

The officer asks where the gun is, and they tell him it's in the brush, along a cut-through between the store and the neighborhood. The video ends with the officer asking for all the teens' information.

In a statement, a spokesperson for the Clayton County Police Department said, "we want to remind our Clayton County citizens that we are committed to protecting and serving each and every one of our citizens through decades of established trust and effective communication. We will remain committed to being transparent and accountable to our community."