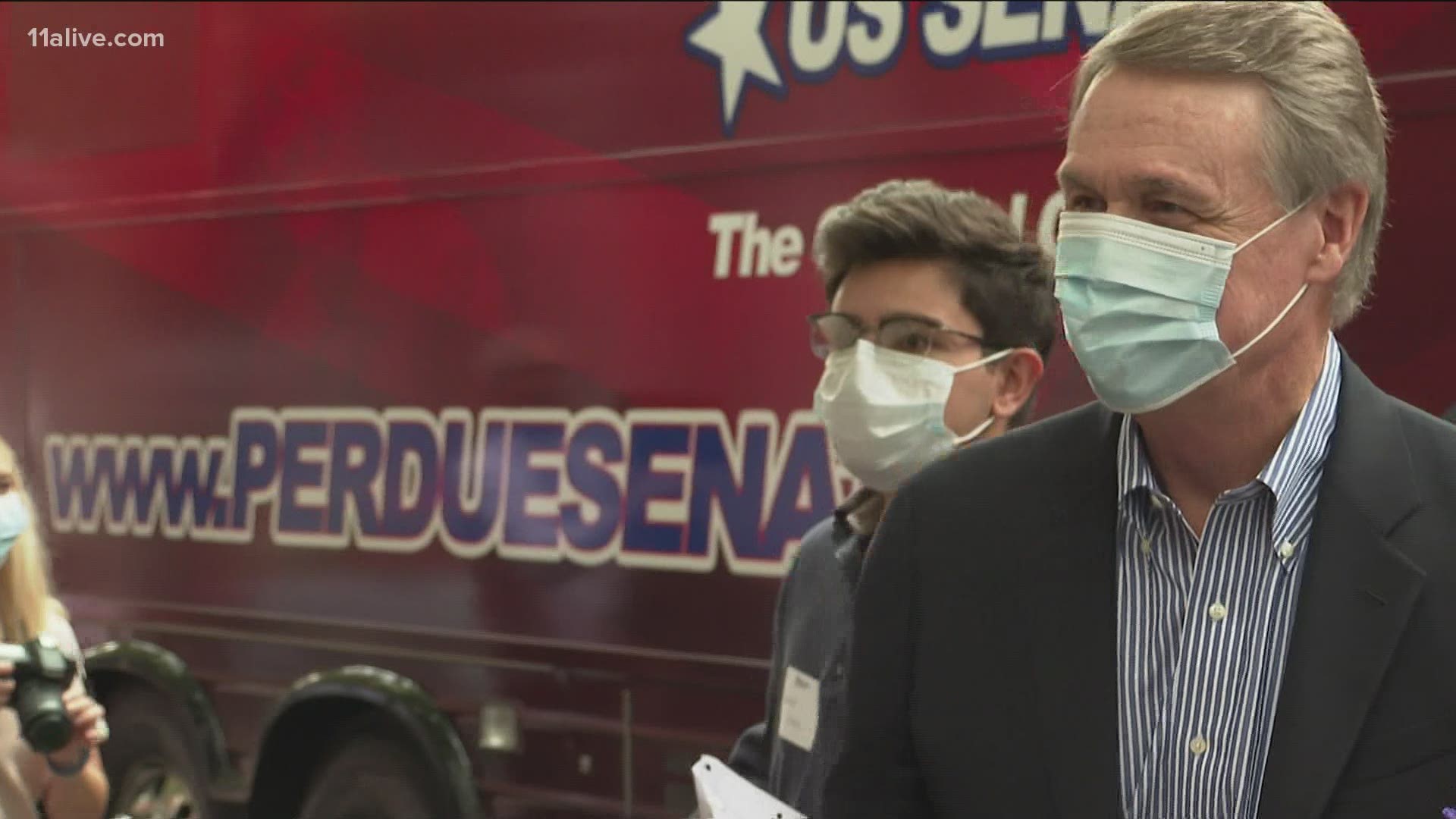 GAINESVILLE, Ga. — US Sen. David Perdue (R-Georgia) made a campaign appearance Friday in Gainesville that was notably brief.

It was also notable because Perdue rarely makes public appearances announced in advance, even as he seeks votes for re-election.

Senator Perdue’s campaign bus made a loud, slow entrance to the square in downtown Gainesville as about three dozen supporters stood in anticipation. The senator’s campaign had not promoted the event on its social media or website.

"His supporters didn’t know anything about this two days ago," said Gene Cobb, a Gainesville Republican who is an enthusiastic backer of Perdue.

It drew media attention because President Trump’s campaign announced it. Perdue exited the bus to a friendly crowd – in contrast to the crowds of liberal protesters who have shown up regularly outside Perdue’s office in Buckhead in the four years since Perdue became a vocal champion for the president.

Cobb said he doesn’t blame Perdue for limiting his exposure to the public.

"Anytime you have a public hearing now, you’re going to have somebody in opposition that disrupts it. So, that’s one of the reasons I believe Sen.Perdue does not have as many town hall meetings," Cobb said.

The Republican senator, seeking a second term in November, told the crowd this was the start of a campaign bus tour; though, the campaign hasn’t revealed its itinerary.

"We will have a (coronavirus) vaccine and we are going to get this economy back," Perdue told the crowd gathered on a sidewalk on the square's east side.

Perdue is speaking more consistently by way of some very expensive TV and social media advertising in his campaign against Jon Ossoff. The Democrat lingered with supporters and took questions at a campaign event in Atlanta Monday, in contrast to Perdue's stop Friday.

Perdue said his schedule kept him from talking with supporters or reporters in Gainesville – or staying longer than nine minutes.

"We gotta go," Perdue said when 11Alive News asked him to stop for a Q&A. Perdue boarded the bus seconds later.  Asked about the bus tour's next stop, staffers were either unable or unwilling to disclose it.

Perdue backer Bambi Gibbons had hoped to get to meet the candidate in Gainesville. She was unable to.

"I was waiting to actually meet him, to get to know him," Gibbons said.

She didn't hold Perdue's brevity against him.

"It was a spur of the moment thing. And it was what it was," Cobb said. "But that was why he was just in and out."

Recent history is on Sen. Perdue’s side. Though polls have shown a tight race, Georgia has not sent a Democrat to the US Senate in 20 years.