The FBI released the portraits this week, hoping some of Samuel Little's victims can be identified from them. 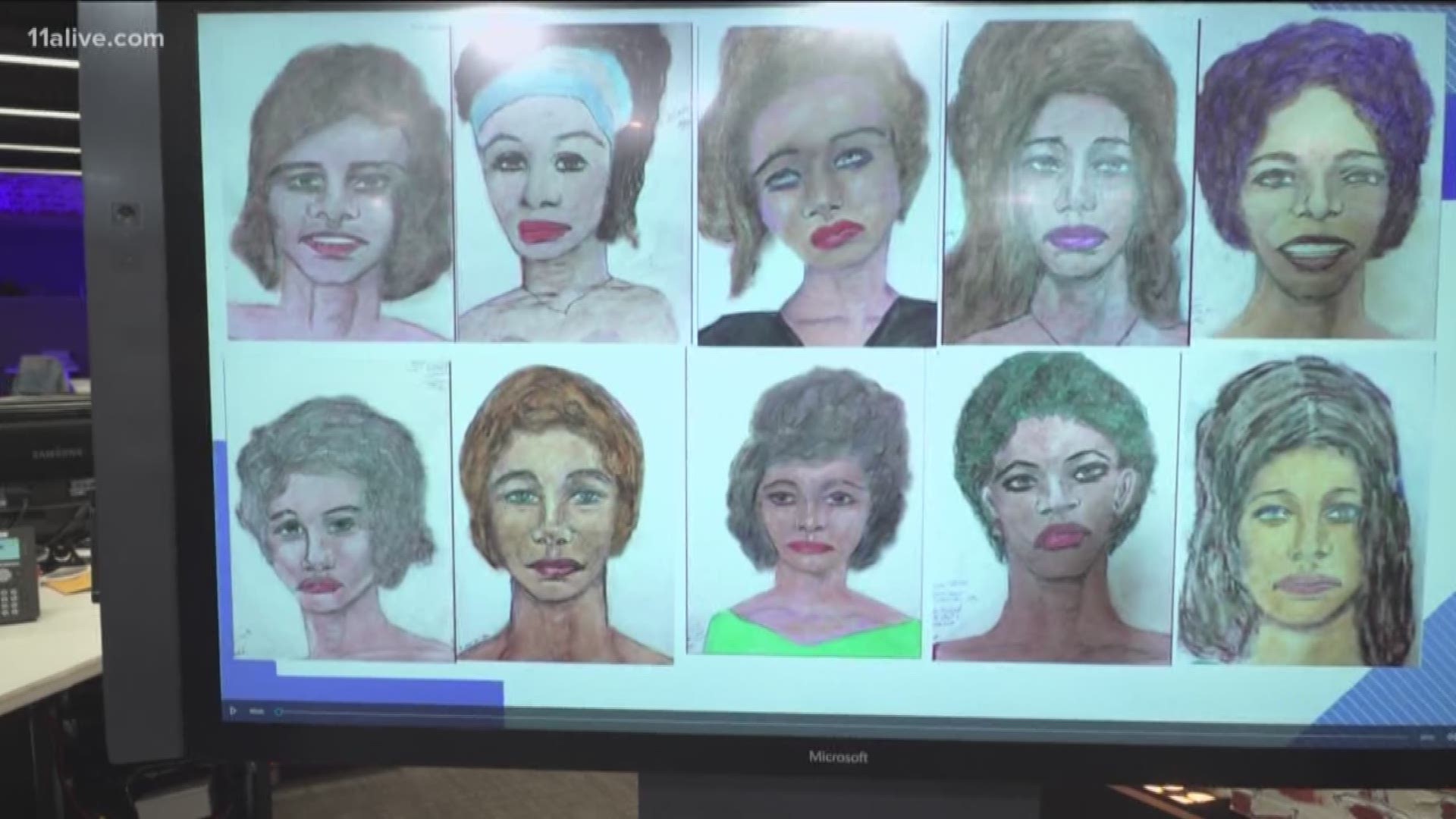 The FBI says a 78-year-old man, originally from Georgia, now sitting in a Texas prison claims to be the most prolific serial killer in American history. Between 1970 and 2005, Samuel Little says he has killed 90 women in a swath across the nation -- seven of them in Georgia, alone.

This week, the FBI released 16 new portraits, hand-drawn by Little himself, of women he says he killed. The images are hauntingly artistic.

Little drew the portraits while in prison in Texas.

While some of the women seen in the images can be tied to some of his confessions, they can't all be positively confirmed or identified.

The FBI is hoping that someone will recognize the women seen in the images.

Little says he killed the three women pictured from Atlanta in the early 80s.

On Wednesday, Atlanta Police told 11Alive they had not been able to corroborate any of Little's alleged victims.

The three victims that Little says he killed in Atlanta, apparently died between 1981 and 1984. 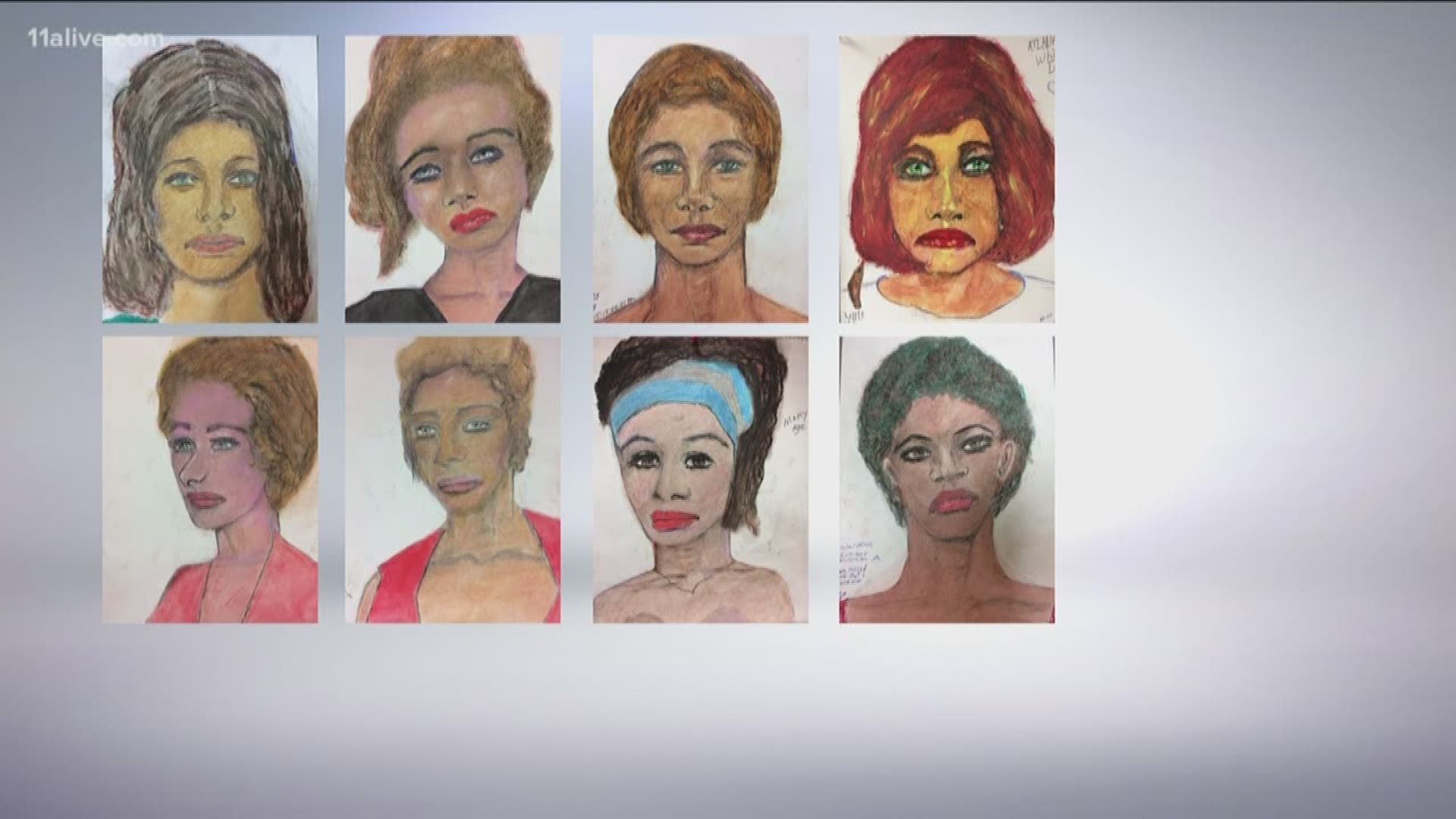 A third Atlanta victim, pictured here at left, with red hair, is described as a white female, age 26, "killed in 1983 or 1984." She is described as possibly being from "Griffith, Georgia."

11Alive Chief Investigator Brendan Keefe says that the area attributed to "Griffith, Georgia," is literally an "empty field at the crossroads of two county roads in Taylor County, Georgia. Additional research found that the only incorporated community in the United States with the name "Griffith," is the city of "Griffith, Indiana," a suburb of Chicago.

Little was arrested at a homeless shelter in Kentucky in 2012 and extradited to California, where authorities said he was wanted on a narcotics charged.

Once they had him in custody, detectives with the Los Angeles Police Department were able to use a DNA match to tie Little to three victims from unsolved homicides from 1987 and 1989 -- allowing them to charge him with three counts of murder.

Little was convicted and sentenced in 2014 to three consecutive life terms with no possibility of parole.

The FBI says that in each of the three cases, the women had been beaten and strangled, their bodies dumped in an alley, a dumpster and a garage.

Little insisted he was innocent during his trial, even though prosecutors brought forth a number of women who said they had barely survived their own encounters with Little.

In the early 1980s, Little had been charged with killing women in Mississippi and Florida but escaped indictment in Mississippi and conviction in Florida. He did serve time for assaulting a woman in Missouri and the assault and false imprisonment of another woman in San Diego.

The LAPD asked the FBI's Violent Criminal Apprehension Program -- ViCAP -- to work up a full background check on Little. ViCAP found an alarming pattern and links to many other murders.

The FBI defines a serial killer as "a series of two or more murders, committed as separate events, usually, but not always, by one offender acting alone."

The very idea of a serial killer brings up images of people like Ted Bundy, John Wayne Gacy, Jeffrey Dahmer, or Charles Manson. But while Bundy and Gacy, long considered among the most notorious serial killers of all, killed between 30 and 35 people, Little's 90 victims dwarfs those numbers.

According to the FBI, Little remembers his victims and the murders in great detail. They said while he draws pictures of the women he killed, he is far less reliable with recalling exact dates and timelines.

The FBI says Little's method of killing did not always leave obvious signs that the death was a homicide. At one point, he was a competitive boxer. Many times, they said, he would stun or knock out victims with powerful punches before strangling them.

Since there were no bullet wounds or stab marks, many times, the deaths may have been classified as drug overdoses, accidents or natural causes as opposed to homicides. In addition, DNA profiling was not always available in the 1970s and early 1980s, when many of the deaths occurred.

► RELATED | After 36 years, Eddie Smith knows what happened to his sister; A serial killer says he murdered her

The FBI says that after he was interviewed and confessed to a homicide in Odessa, Texas, Little was extradited there, where he remains in custody today.

According to the FBI, Little is currently in poor health, and is expected to remain in Texas, likely until his death.

FBI agents are hopeful that they can help identify his victims and provide closure and justice in many unsolved cases.