The Trump campaign to request an official recount - in Georgia, 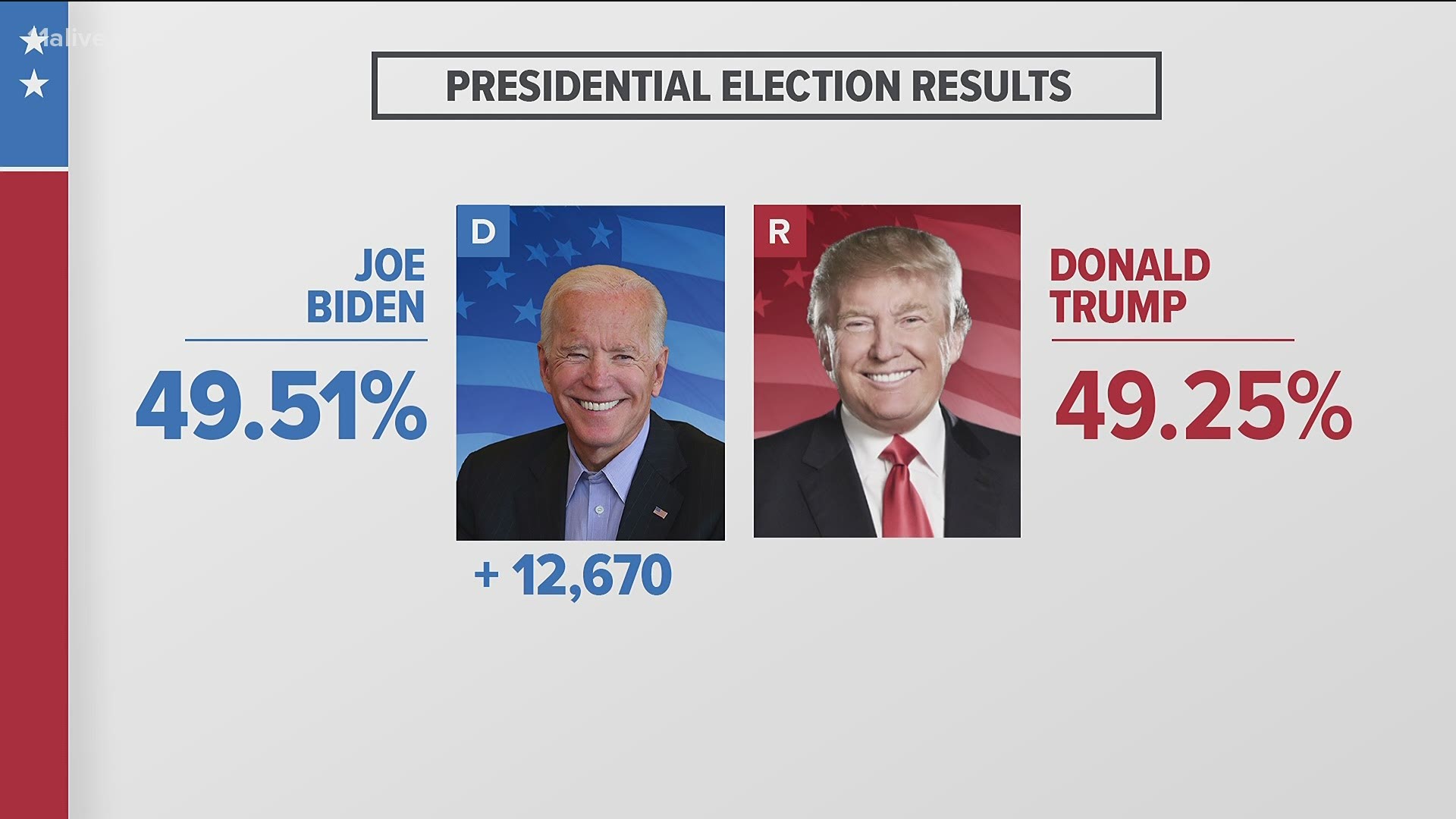 ATLANTA — Now nearly three weeks on from Election Day, Georgia will begin to count its votes for a third time, starting Tuesday.

4:00 p.m. | Lin Wood, the Atlanta attorney who famously represented Richard Jewell and whose lawsuit to stop Sec. of State Brad Raffensperger failed last week, tweeted out a series of videos this afternoon suggesting that Cobb County was destroying ballots.

Apart from the obvious problem that would present the county, being as that they have to recount them this week, the county provided a statement saying the ballots are not stored at the county elections office in Marietta, where the video was taken, but at the counting site several miles away:

The video purportedly shows a shredding company at the building housing the main office for Cobb Elections on Whitlock Avenue in Marietta. This building houses many other Cobb County governmental offices, and the document disposal company was at the building as part of a regularly-scheduled visit to the Cobb Tax Commissioner’s office. No items from Cobb Elections were involved.

The ballots and documents involved in the recount effort are currently located at the Jim R. Miller Event Center several miles away.

Thanks for the opportunity to proactively clear this up.

This is the second time the county has had to refute a viral claim about document shredding. The first came last week, when they said they had been shredding a number of documents and supplies - such as envelopes with voter info on them and printouts of old emails - that were no longer necessary.

3:20 p.m. | The NBC affiliate in August, WRDW/WAGT, is reporting that Georgia Congressman Rick Allen has tested positive for COVID-19.

3:00 p.m. | During a press conference to address COVID-19 ahead of the Thanksgiving holiday, Gov. Brian Kemp made a few brief remarks on Georgia's recount and the ongoing process to finalize the 2020 election:

"I continue to stand with the president and support his decision to ensure every legal vote is counted. I have followed the law and I will continue to do so. As stated last week, I support a sample audit of signatures, strengthening photo ID laws for absentee ballots and I firmly believe all voting irregularities need to be fully investigated.

"We should follow the law and continue to put Georgians first.

"Over the last several weeks, unfortunately there's been a lot of misinformation, and more recently baseless attacks that are absolutely absurd, and accusations made against myself and my family. These are ridiculous. They only seek to breed fear, create confusion and sow discord amongst our citizens.

"Now more than ever, we must stand up for the truth and we have to unite around our shared values. We must ignore those that want to divide us and find a way to overcome the challenges that we all face together. I'm committed to doing that, so thank you."

1:00 p.m. | Joe Biden is expected to introduce his national security team in a few moments. You can watch that press conference here.

The county says the recount itself will begin tomorrow at 8 a.m. Today they will begin logic and accuracy testing on equipment at 4:30 p.m.

They did not specify hours if the recount lasts through Tuesday and Wednesday. The deadline is next Wednesday at midnight.

The county said it has about 528,000 ballots to recount, and will be using 50 workers and 13 scanners to conduct its recount.

"During the recount, an observation area will be provided for the public and the press. Each of the political parties recognized by Georgia Secretary of State for this recount, the Republican, Democrat and Libertarian parties, will be allowed two designated monitors as provided by the Secretary of State’s guidelines. All others may view the recount from the observer area," a release said.

The county said it expected to live stream the recount, with details on that "forthcoming."

The recount will be conducted at the Georgia World Congress Center in Room B1.

11:55 a.m. | The recount efforts will be much different lifts for different counties. Cherokee, for instance, isn't going to even start until next Monday according to 11Alive's Brendan Keefe:

Cherokee County, Georgia isn’t starting the actual scanning until Monday of next week because they can likely get it done in a day. https://t.co/2WnXgQxHdK

RIGHT NOW: Gwinnett Co. getting set up, now testing the high-speed scanners with a sample batch of ballots. The county has 22 scanners that will be used in the recount (for about 416k ballots). DeKalb has 9 scanners (for about 373k ballots). #gapol #11Alive https://t.co/a3ox8vjNyP pic.twitter.com/QE6SxXoo7a

10:10 a.m. | By the way, important note that Gabriel Sterling from the Secretary of State's Office touched on yesterday:

For the hand-count audit, no results were published while it was in progress. For the official recount, results will be made available as each county finishes.

That means that as smaller counties that generally favored President Trump finish more quickly and release their results, it may look for a time like the president is ahead.

9:10 a.m. | DeKalb County has released some of its plans for the official recount. DeKalb County Voter Registration and Elections Director Erica Hamilton said their process would be "very similar to the recent risk-limiting audit," the hand count done last week.

“We’re engaging the same partners, county departments and others to ensure we’re able to once again maintain the integrity of the process," Hamilton said in a statement.

The county will be using the former Sam's Club in Stonecrest as their counting site, as they did for the audit.

DeKalb VRE is scheduling the recount to take place on the following dates and times:

6:50 a.m. | Gwinnett recount update from Joe Sorenson: Logic and accuracy testing is set to begin at 9 a.m. The recount is expected to begin shortly after- perhaps 10:30 or 11. The workers are scheduled to stay until 8 p.m. today, then they will be back on Wednesday at 9 a.m.-5 p.m. They will not count on Thursday or Friday. Schedules for Saturday and Sunday are TBD. Adjudication panels will not be convened until Monday, November 30