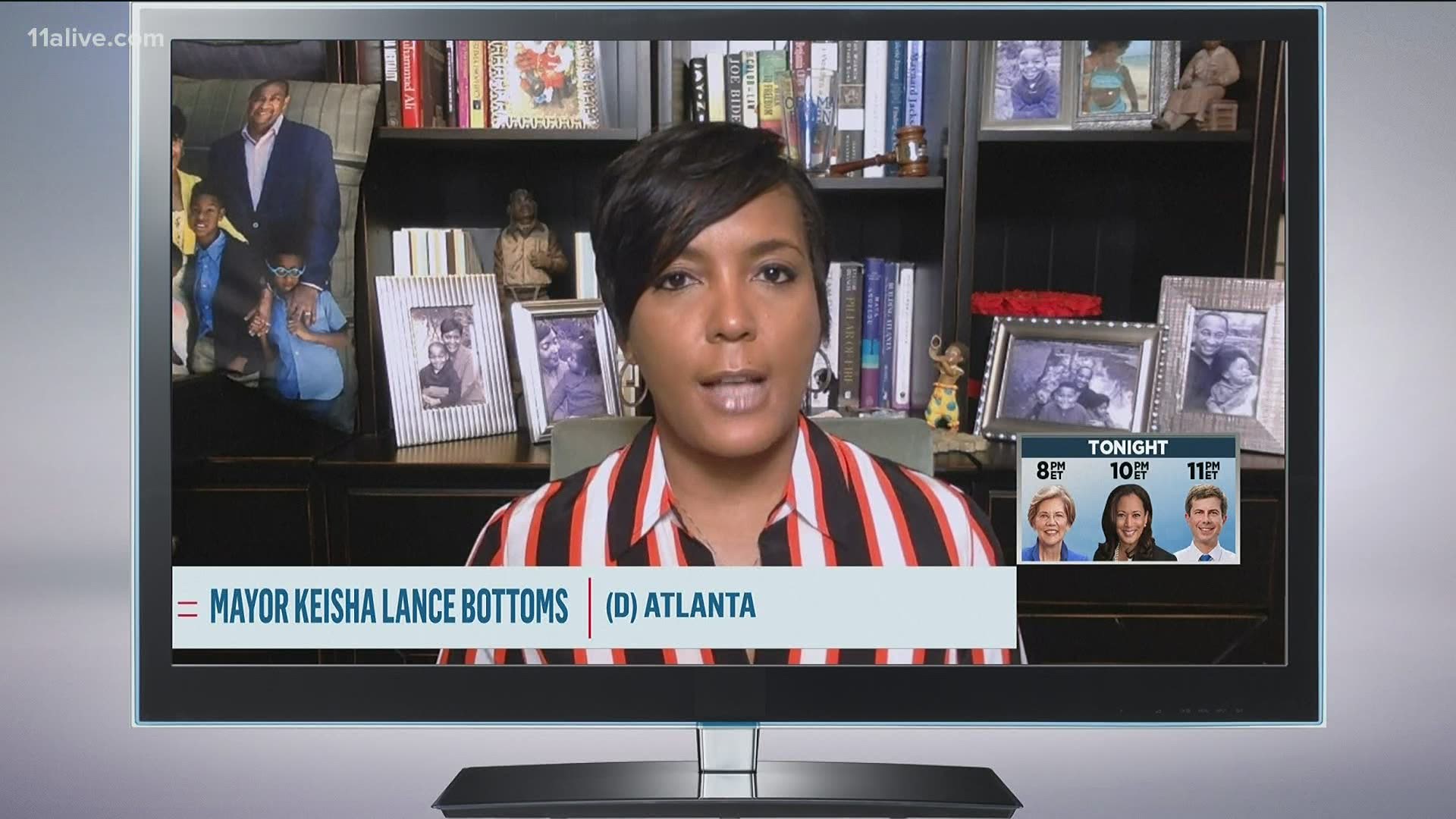 ATLANTA — One day after Atlanta Mayor Keisha Lance Bottoms ordered a mask mandate for the city, she called out Gov. Bryant Kemp, saying his leadership has been "irresponsible."

The mayor talked to MSNBC's Andrea Mitchell on Thursday afternoon about Kemp, her COVID-19 diagnosis, recent crime in the city, and other topics.

The mayor signed an executive order Wednesday saying that anyone inside commercial entities or public spaces in which proper social distancing is not possible is required to wear a face covering. The order also applies to all people flying in and out of Hartsfield-Jackson International Airport.

When Kemp issued guidelines for reopening the economy weeks ago, he said the measures he put in place would apply statewide and would be the operational standard in all jurisdictions.

"This means local action cannot be taken that is more or less restrictive," Kemp said during the April news conference.

But Bottoms and a few other municipalities have decided to take matters into their own hands when it comes to requiring face coverings.

"I followed the lead of other mayors across our state, including Van Johnson of Savannah, who mandated that masks be worn in Savannah, and so he did that a week prior," she said. "I wanted to wait and see what the governor’s response would be to that. That mandate has not been challenged so Atlanta has followed suit."

Kemp has said in recent interviews he didn't believe a statewide mask mandate was necessary. Bottoms seems to disagree the approach the governor has taken during the pandemic.

“The governor is not doing enough for our state and his leadership has been irresponsible," she said. "We opened up very quickly. We are now seeing the results of that. Our COVID numbers are as high as they’ve ever been.”

Those numbers also include Mayor Bottoms' case. She tweeted earlier this week that she tested positive for the virus, along with a few others in her household. She said it took a while for her to get the results back.

"It’s frustrating, and the reality was that I got tested simply because I had attended the funeral of Rayshard Brooks, and just decided to get my family tested at the same time, simply because I could," she explained.

"I didn’t get those results back until 8 days later," she added.

RELATED: Mayor Bottoms says it took 8 days for her and her family to get test results

She said by that time, her husband was just sleeping a lot.

"We got tested again, and I got those results back the same day," Bottoms said.

"The next day, I got the previous test results back and saw that my child was asymptomatic, so we had an asymptomatic child in the house. My husband and I at that time were negative," she explained. "This is the story we are hearing all across America and certainly had we gotten those results back sooner then we could have taken additional precautions."

She said since then, her mom was also tested for COVID-19, but the results were negative, along with her three other children. But she expressed frustration at the time it takes to even get tests - and results.

"Donald Trump has to take responsibility for us being able to get rapid testing in this country, because it’s the only way the asymptomatic people like me will be able to quarantine and not inadvertently expose other people to this virus," Bottoms said.

As it relates to the mask mandate, in a statement to 11Alive, Candice Broce, the director of communications for the governor's office said, "like all of the local mask mandates, Mayor Bottoms' order is unenforceable."

"If the mayor wants to flatten the curve in Atlanta, she should start enforcing the current provisions of the governor's orders," the statement added.

Outside of COVID-19, Bottoms opened up about another headline that has put Atlanta into the national spotlight. Over the Fourth of July weekend, Atlanta Police said 31 people were shot in multiple incidents. Five of those victims didn't survive, including 8-year-old Secoreia Turner.

The mayor said that on their end, they can continue to up patrols in neighborhoods and be as present and visible.

She also talked about other shootings that have happened in crowds. In one incident from the weekend, 14 people were hit when shots rang out in a crowd watching fireworks on Auburn Avenue. Two of the victims died.

"What we are seeing in Atlanta, we are having the shootings with mass gatherings and multiple shooters - that is something that we have not experienced on this scale in our city," she said.

“I’ve asked people to please, if you are out and things are feeling volatile and it seems like it’s headed in the wrong direction, please remove yourself," she said.

MSNBC also asked Bottoms if many of the issues and tragedy give her pause about being a possible running mate for Joe Biden. Bottoms said she doesn't think about.

"I don’t have the luxury of giving thought to it," she told Mitchell. "I have a very big job in front of me and to the extent that my name is being discussed, that’s a discussion for other people to have. But my focus remains on Atlanta."

Watch more from the interview here.

Bottoms and Kemp | The different views of the two leaders