Who is responsible for college COVID-19 cases?

The blame game is in full swing, but are the number of cases the fault of school leadership, or college students? 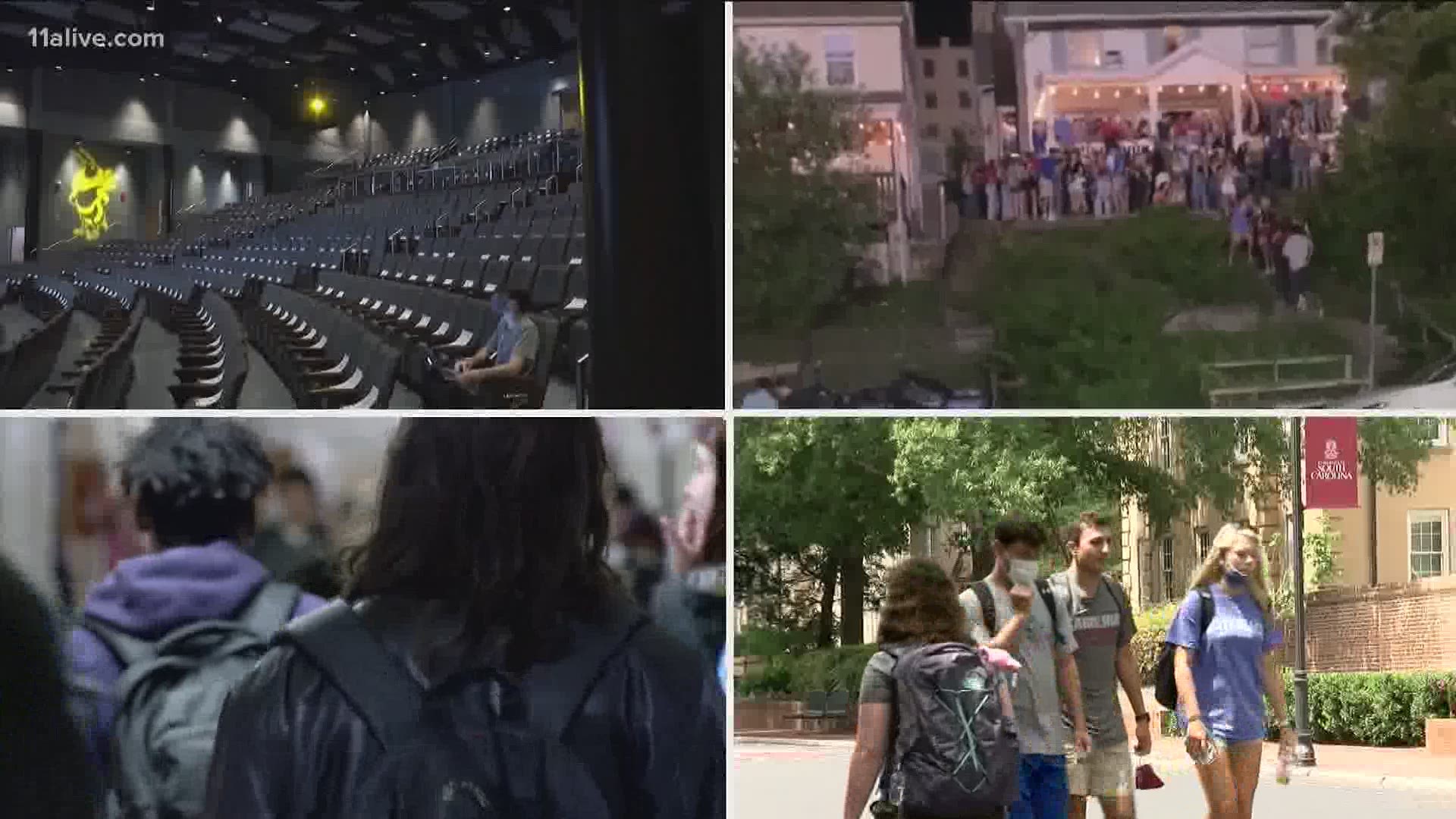 ATLANTA — Heading back to school during a pandemic has been top-of-mind for many parents for the last few weeks, and that's especially true for those who have had to send their students away to college campuses.

Images of large parties on campuses across the country quick circulated after students returned.

There's been a lot of support for having college students learn through an all-virtual model - or even sending them back home altogether - but many parents and students have also said they want to remain on campus.

So who's at fault when cases of COVID-19 rise?

When it comes to college campuses and COVID-19, the blame game is in full swing, but are the number of cases the fault of school leadership, or irresponsible college students?

"There is a big blame on college students, which I think is rightfully so, in some ways," said UGA student Emily Turner. "But I do see a lot of non-college students in the community not taking COVID seriously as well."

In Georgia, there is no uniform way of reporting cases among colleges and universities, so each school decides for itself what data to share and how. Some numbers reflect main and satellite campuses located different in communities. There have also been concerns that some school data is under reported, as COVID-positive students on their parents' insurance may not always factor into their campus community's count.

Students across the county have been scolded, suspended and called selfish by college leaders, and while students bear personal responsibly for their actions and for following school and public health guidelines, experts say blaming them for the situation is problematic, too.

Turner wishes there were safer options for students to gather, along with mental health considerations, understandable data and consequences for some students' actions.

"I know a lot of people are on the wave of closing campus, and I don't think that's the option that we need to go to, because kids are still going to want social interaction, so that's just going to drive them more to go into the bars," Turner hypothesized.

Some health experts say students were set up to fail, with unrealistic expectations for their behavior.

Julia Marcus, a Harvard Medical School infectious disease epidemiologist, told NBC News isolation isn't practical on college campuses and the age group is primed to take risks, especially for students who have been isolated and away from friends for months.

She says blaming students makes them less likely to openly work with contract tracers, perhaps with fear of negative consequences on campus.

Instead, experts say schools should explore harm-reduction approaches - not outright bans - shifting the focus to making gatherings that will likely still occur more safe. That means ideas like porch parties, with social distancing and masks, or outdoor beer pong.

Some have praised ideas like chairs on the library lawn at the University of Note Dame, with fire pits and games outside.

Marcus warns that so called "abstinence-only approaches" to COVID-19, where things are flatly not allowed, will result in unintended results.

She says there's a real need for compassion and creativity.