QAnon Republican US House candidate endorses Loeffler for US Senate 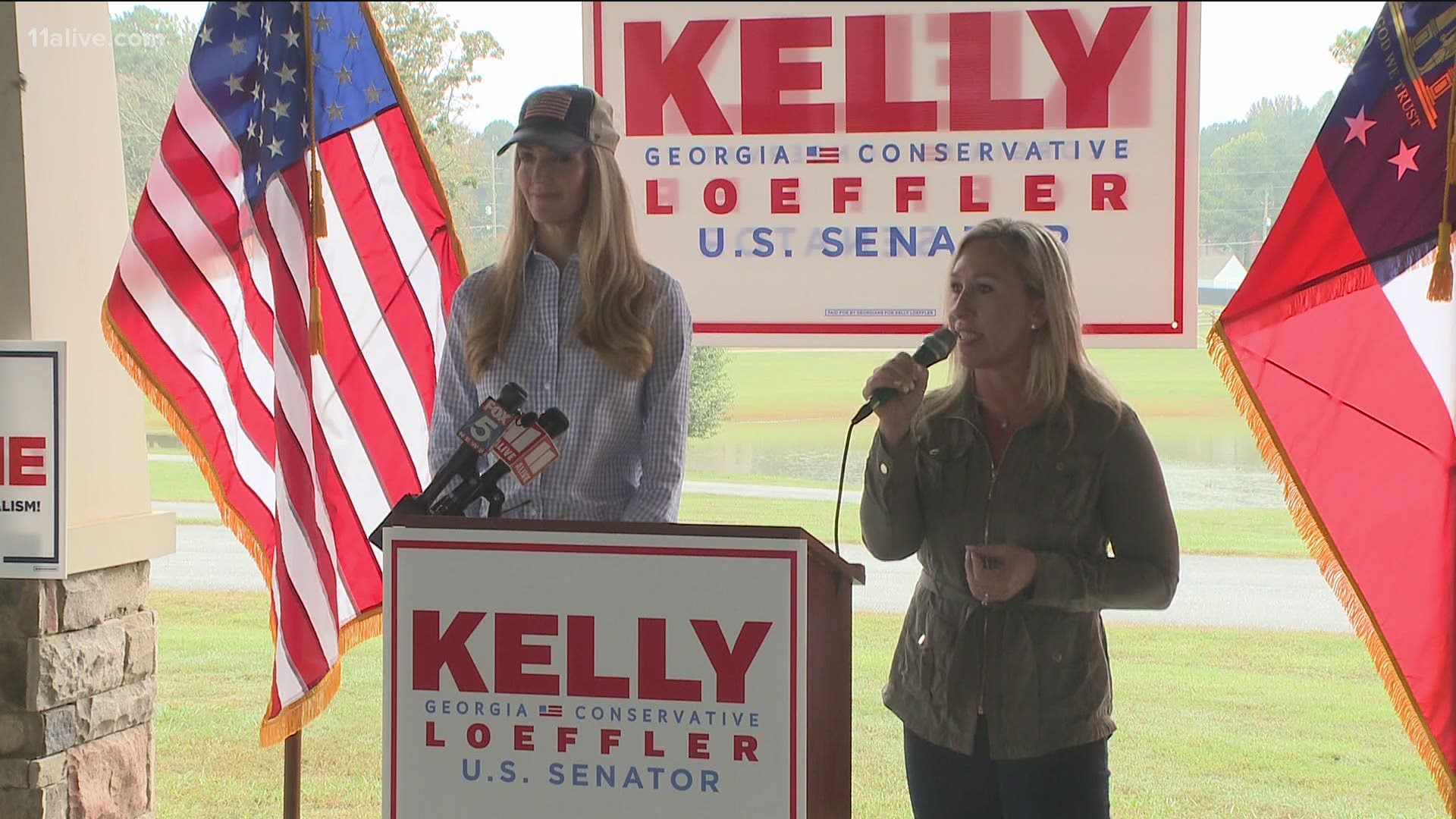 DALLAS, Ga. — Republican US Sen. Kelly Loeffler got a polarizing endorsement Thursday from one of Georgia’s most controversial political figures.

Fellow Republican candidate Marjorie Taylor Greene has no opposition in her bid to go to the US House representing Georgia's 14th Congressional District in the northwest portion of the state.

Greene has received national attention for dabbling in the controversial conspiracy theories tied to the group known as "QAnon." During a joint appearance on Thursday, Loeffler was eager to emphasize the common ground the two shared.

Greene arrived at the joint appearance driving her campaign's Humvee, with Loeffler riding along cheerfully.

Greene's Democratic opponent in the 14th District withdrew from the ballot a few weeks ago, assuring her victory in the November General Election.

Loeffler, looking to return to her US Senate seat, has no such guarantee. She faces a crowded race in a special election to complete the term of now-retired US Senator Johnny Isakson.

Isakson retired last December as a result of challenges brought about by his health. Loeffler was named to hold the seat by Georgia Gov. Brian Kemp until November's special election to complete Isakson's term.

An exclusive 11Alive News/Survey USA poll released this week shows Democrat Raphael Warnock in the front of the crowded pack of candidates. Loeffler is nominally ahead of fellow Republican Doug Collins.

If no one candidate in the field can earn 50%-plus one vote in the race, the top two vote-getters will face each other in a run-off election in January -- after the new Congressional session gets underway.

Greene was very enthusiastic about her support for Loeffler as she spoke before reporters and a modest crowd of supporters at a park pavilion in Paulding County.

"What I found out about Kelly is she believes a lot of the same things I believe," Greene said.

She is definitely more vocal and enthusiastic about Loeffler than she is regarding her public support of QAnon.

QAnon is the supposed central figure in a set of shadowy right-wing conspiracy theories that have emerged alongside the rise of President Donald Trump.

"Q is a patriot," Greene said in a video posted to Facebook in November 2017.

Loeffler tried to distance herself from the QAnon controversy when asked about it on Thursday.

"I don’t know anything about QAnon," Loeffler said.

Loeffler is more concerned with getting Greene's supporters to back her over Doug Collins. She said that QAnon is not relevant to the US Senate race.

"No one in Georgia cares about the QAnon business," Loeffler said. "This is something the fake news is going to continue to bring up – and ignore Antifa."

Loeffler's statement prompted an outburst from Greene to the reporter who asked the QAnon question.

"Have you retracted any of your fake news articles about Russian collusion conspiracy theories attacking President Trump?" Greene asked loudly. "Have you written any articles lately about Hunter Biden and the scandal attached to Joe Biden?"

Applause from the supporters present drowned out the last few words.

At that point, the candidates made an abrupt exit -- back to the Humvee, leaving the voters to make sense of it all.

The endorsement does pose a risk for Loeffler in the event that she ends up in a January runoff against Warnock.

Democrats would use the endorsement by Greene as a weapon against Loeffler, as the candidates continue to seek undecided votes from centrist voters.