The top 6 candidates met for a debate focused on issues important to the community. 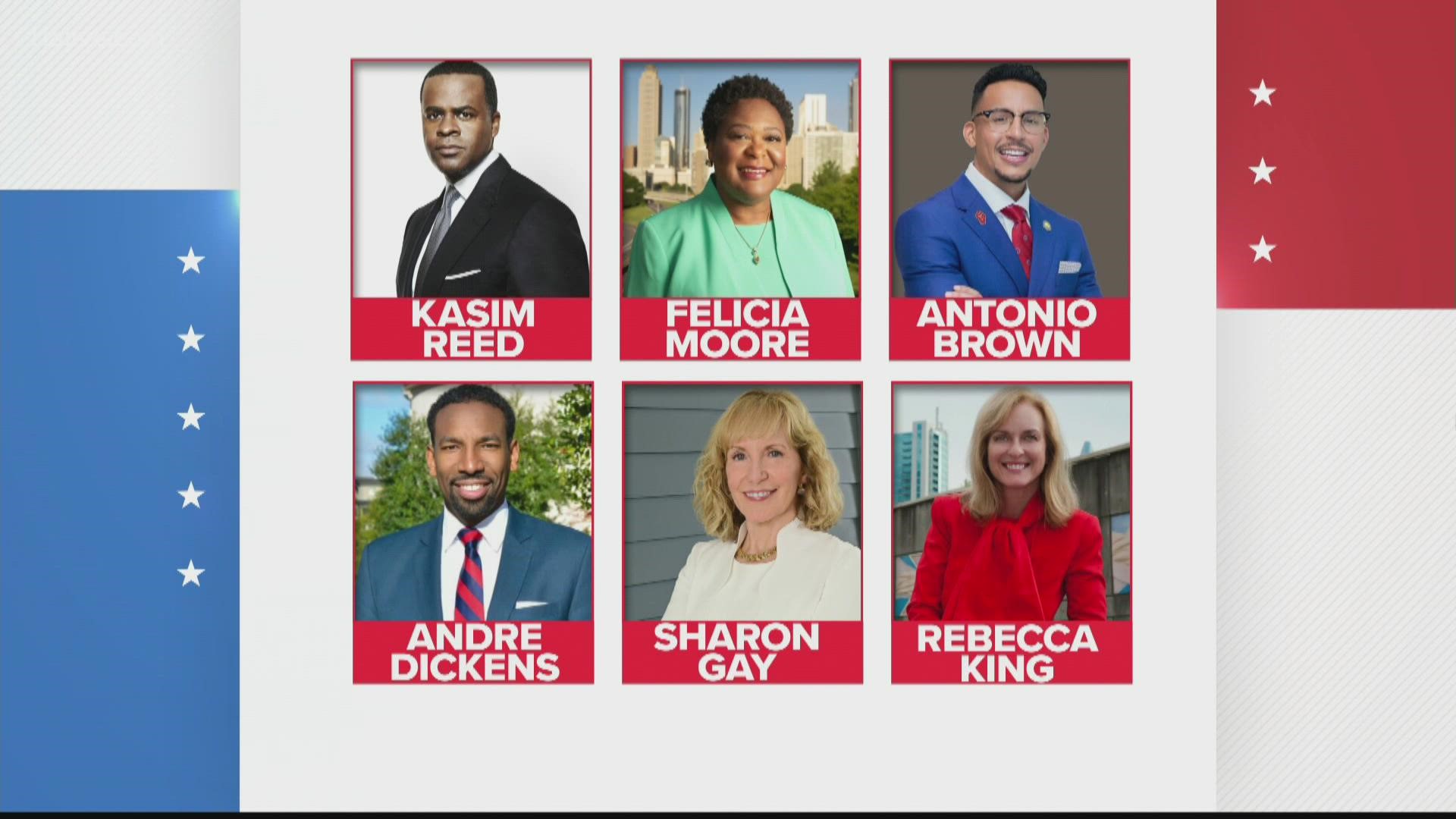 ATLANTA — In less than a month, Atlanta voters will head to the polls to decide who will lead the city for the next four years. This year's slate of leading candidates presents a diverse mix that includes the former mayor of Atlanta and current City Council president.

The debate was moderated by 11Alive's Shiba Russell and Jeff Hullinger.

Watch a replay of the debate in the video player below or click here.

Each candidate participating qualified by receiving 5% support in a poll the station conducted at the beginning of the month.

Our poll found a whopping 31% of voters were still undecided, meaning the race is very much still up for grabs ahead of the Nov. 2 election.

These are the six candidates who will be participating in tonight's debate, in the order of how they ranked in our poll (or alphabetically, if they tied):

Reed is the most familiar face in the race for the simple reason that he's had the job before - running Atlanta for two terms as mayor from 2010-18. Among the hallmarks of his time in office, Reed oversaw rapid growth of the city and staked much of his reputation as being tough on crime.

As a candidate for the second time around, Reed has continued to tout his record on crime - which dropped substantially while he was mayor. After a spike in crime in Atlanta and nationally earlier this year, Reed told 11Alive "we are at a moment of crisis."

The continued development of the city, and how it can be accomplished equitably, will also be a question for Reed. Gentrification is an issue that has proved not to have any easy solution for Mayor Keisha Lance Bottoms, and with developments mushrooming on the city's vulnerable Westside, it stands only to gain more prominence.

Even back during Reed's administration, he spoke of the need to ensure longtime Westside residents "don’t get pushed out."

The former mayor will also have to answer questions about a federal inquiry into campaign spending his lawyers say has closed without charges, as well as the bribery scandal and indictments that followed several of the officials who served in his administration.

Moore is perhaps the most experienced candidate in the race, with two decades on the Atlanta City Council representing much of the Westside and northwest corner of Atlanta in District 9. Since 2018, she has been City Council president.

She has contrasted herself with Reed by presenting herself as a champion of transparency and clean government.

Like Reed, she has touted herself as a crime fighter. Moore's law enforcement bonafides include championing the original "Mattie's Call" program at the Atlanta Police Department for missing adults with mental disabilities, which later became a statewide alert system.

In her official campaign announcement, she touched on her crime platform, saying "this race is against the crime that is out of control in every neighborhood in our city." Last December, she issued a series of recommendations on crime reduction strategies in a memo. In speaking about crime, she has also given a rhetorical nod to the protests last year against police brutality and said Atlanta needs to "create a 21st Century police department, where our officers see themselves as guardians and not warriors against crime."

On one issue she has split with current Mayor Bottoms who has vowed to close the Atlanta City Detention Center - a target of protesters. Moore instead has said she would allow the Fulton County Sheriff's Office to house prisoners there, citing what she said were overcrowded conditions at the Fulton County Jail.

Brown, a 36-year-old millennial who would be the city's second-youngest ever mayor, has largely aligned himself with the activist causes that gained ascendance during last year's racial justice protests and, with that, seen his own profile rise markedly. Brown has only served on the City Council since his election in 2019, in that short time prioritizing policies such as finding diversion programs, rather than punishing, the Atlanta "water boys," and police reform measures that would hold officers responsible for intervening if a partner were committing excessive force.

He boasts an extensive campaign platform that touches on topics such as affordable housing, the availability of fresh foods in underserved neighborhoods, and Atlanta's stark inequality.

Brown, who represents much of the heart of the city in Midtown and Downtown in District 3, has a federal fraud indictment that could soon go to trial over accusations he spent thousands of dollars using credit cards and personal loans only to falsely claim he had been the victim of identity theft.

Like the other following candidates, Brown received 5% support in 11Alive's poll.

Another member of the City Council who as an at-large councilman has won two citywide races since 2013, Dickens has also ran a campaign built on the foundation of his community advocacy. He, like Brown, has spoke about positively directing the entrepreneurial energies of the "water boys" and appeared at high-profile community outreach events.

He also helped push Atlanta to establish a $15 minimum wage for city employees back in 2017. A native Atlantan, he's been chairman of the City Council's Transportation, Public Safety and Legal Administration committees.

Gay, an Inman Park resident, is a private attorney with a long history in Atlanta city politics, though she has never held public office. Her work in Atlanta with the Dentons law firm suggests the issue she'll be able to speak most forcefully about in the campaign is development. She's long been a behind-the-scenes power player in Atlanta's development, dating back to her role as a top lieutenant for former Mayor Bill Campbell who helped bring the Olympics to the city and then with financing Atlanta Station's development in the early 00s.

Her Dentons profile indicates she had a role in financing significant city developments in the last decade-plus: Ponce City Market, Glenwood Place, Atlanta Dairies, and Krog Street Market among them.

With gentrification a major concern in Atlanta, Gay has vowed she would take development equity concerns seriously, speaking about the negative effects of "redlining, VA loans only going to white families, exclusionary zoning, or redeveloping only poor Black neighborhoods but not others."

She's also considered a leading influence in the use of "tax allocation district" financing for developments, a practice that has come under scrutiny for whether it provides any public benefit.

A relatively lesser-known candidate, the Buckhead businesswoman surprised with her 5% showing in the 11Alive poll. She has spoken most authoritatively on the Buckhead cityhood issue - as the only major candidate who actually lives in Buckhead.

She has rejected it, telling 11Alive's Doug Richards that, "I don't think it solves any problems."

King, the CEO of Cover Your Assets, Inc., unsuccessfully ran for a City Council seat four years ago and serves currently on Buckhead's Neighborhood Planning Unit. Her campaign site describes her as an "advocate for sustainable living" who "has worked with private, philanthropic and community organizations in a number of capacities."

Much of her philanthropic and community work appears to have centered around Buckhead's livability and viability issues.

This debate is brought to you by The Georgia Voter Coalition (GVC), 100 Black Men of Atlanta and The Emerging 100 of Atlanta in conjunction with the National Association of Asian American Professionals, Hispanic Young Professional and Entrepreneurs, Atlanta Jewish Committee ACCESS, Metro Atlanta Association of Professionals, Urban League of Greater Atlanta Young Professionals and National Black MBA Atlanta, and 11Alive. This coalition of organizations, led by the GVC and 100 Black Men, is a true reflection of the demographic diversity of the City of Atlanta.